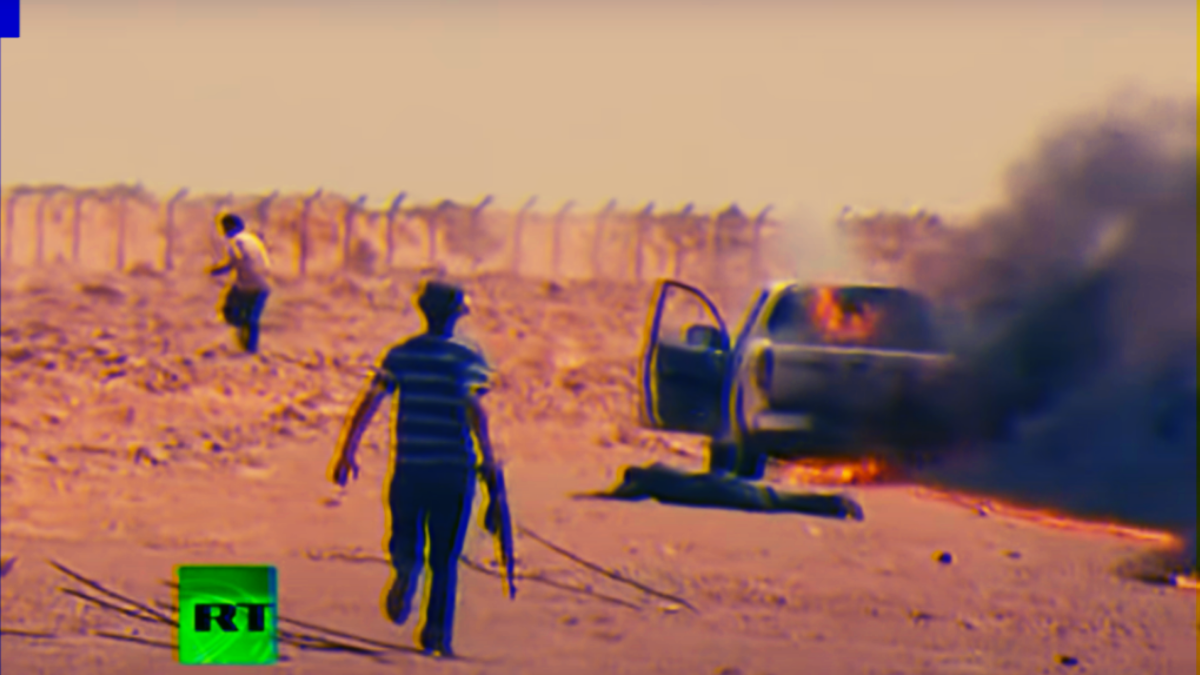 This combat footage filmed by Al-Jazeera in the First Libyan Civil War in 2011 shows Gaddafi Loyalists on an apparent reconnaissance mission dramatically ambushed when they come across a Rebel Checkpoint. Gunfire rakes their 4×4 causing it to burst into flames. As the men flee, one is cut down with Kalashnikov fire whilst the other attempts to make an attempt through the cover of the smoke. However, he surrenders when he realizes there is no way out. Both men survived the ambush despite injuries, but what happened to them afterward is unknown.

The attack took place at a rebel checkpoint near the city of Sirte, which was the hometown and final stronghold of Muammar Gaddafi. Only a few months after this footage was captured, Muammar al-Gaddafi broke out of a besieged Sirte in a joint civilian-military convoy that was subsequently attacked by NATO fighter jets. The aerial attack destroyed multiple vehicles and killed over 50 people. Gadaffi was soon captured by the Misrata militia who brutally beat, raped (with a knife), and executed him.

The Misrata militia took Gaddafi’s sidearm and brandished it on camera. The weapon was a personalized, gold-plated Browning Hi-Power handgun. The gun was engraved with references to the Khamis Brigade which was the Gaddafi regime security brigade of the Libyan Armed Forces. Not to be confused with the infamous all-female (and supposedly all-virgin) Amazonian Guard protection squad that Gaddafi surrounded himself with throughout his reign.

The First Libyan Civil War was fought between forces loyal to Colonel Muammar Gaddafi and anti-Gaddafi rebel groups seeking to overthrow the long-running regime. The foundations of the First Libyan Civil War lay in the Libyan Revolution. During protests through various Libyan cities, clashes with security forces led to Gaddafi forces firing on crowds of Libyans which quickly escalated into a full-blown rebellion throughout the entire country.

The United Nations stepped in, freezing the assets of Gaddafi and his allies. Gaddafi forces moved to retake rebel-controlled territory and moved along the Libyan coastline to the city of Benghazi. A UN-enforced no-fly zone was put in place over Libya and before long, a NATO bombing campaign began to target the Gaddafi regime. Various ceasefires collapsed or were rejected and the fighting and hatred between both sides rapidly grew more gruesome and bitter.

The NATO bombing campaign massively assisted the Libyan rebels and allowed them to mount an offensive that led to the capture of Tripoli and force Gaddafi on the run. On 16 September 2011, the United Nations then officially recognized the rebel forces, under the banner of the National Transitional Council, as the legal rulers of Libya. Just over a month later Muammar Gaddafi was captured and killed and the war was declared ”officially over” 3 days later.

Despite the declaration of the end of the war, fighting continued in the former of an insurgency led by fighters still loyal to Gaddafi. The string of heavily armed militia groups began to vie for a position of power in the new Libya. Many of thee battle-hardened groups refused to disarm or be integrated into a coordinated and reformed Libyan military. Such issues were a leading cause of the outbreak of the second Libyan Civil War, which continues to rage to this day.