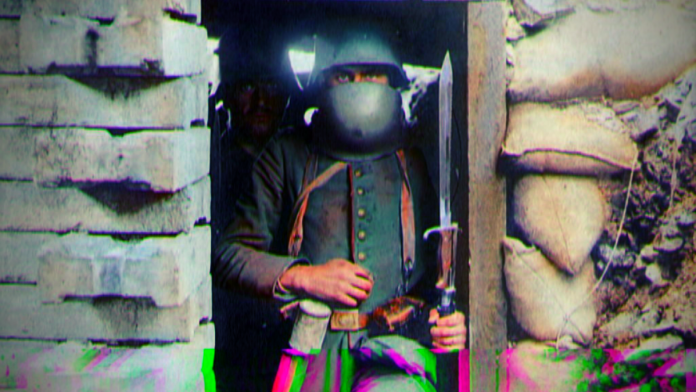 Whilst the majority of our content focuses on the more recent forms of modern warfare, I have rarely heard such a graphic yet poetic description of combat like this one. This sobering footage is an excerpt from a BBC documentary called “The Great War” made in 1964. It features a German veteran of the First World War relaying his experiences of taking the life of a French corporal in a bayonet charge, the after effects, and his views on war as he nears the end of his life in old age.

From ancient times to the current War in Afghanistan, throughout history soldiers like the man in this video have provided invaluable testimony of the horrors of warfare. I’ve spent a lot of time reading about the testimonies of warfare throughout history. One of the most striking I’ve found is that of King Sennacherib who described his war against the city of Babylon in modern-day Iraq:

I swiftly marched to Babylon which I was intent upon conquering. I blew like the onrush of a hurricane and enveloped the city like a fog. I completely surrounded it and captured it by breaching and scaling the walls. I did not spare his mighty warriors, young or old, but filled the city square with their corpse I turned over to my men to keep the property of that city, silver, gold, gems, all the moveable goods. My men took hold of the statues of the gods in the city and smashed them. They took possession of the property of the gods. The statues of Adad and Shala, gods of the city Ekallati that Marduk-Nadin-Ahe, king of Babylonia, had taken to Babylon at the time of Tiglath Pileser I, King of Assyria, I brought out of Babylon after four hundred and eighteen years. I returned them to the city of Ekallati. The city and houses I completely destroyed from foundations to roof and set fire to them. I tore down both inner and outer city walls, temples, temple-towers made of brick and clay – as many as there were – and threw everything into the Arahtu canal. I dug a ditch inside the city and thereby leveled off the earth on its site with water. I destroyed even the outline of its foundations. I flattened it more than any flood could have done. In order that the site of that city and its temples would never be remembered, I devastated it with water so that it became a mere meadow.

Remember, Hollywood war movies are almost entirely fantasy, whereas the words of those who have lived through war are often gospel.

The German Butcher Bayonet of WW1

Throughout the First World War, the bayonet saw intense usage in the gruesome close combat of trench warfare throughout the conflict. One of the most infamous bayonets was used by the German forces and known as the ‘Butcher Bayonet’. I acquired a modified version a few months ago for my military collection and delved deeper into the story of this brutal weapon.

The German Butcher Bayonet was the serrated version of the S98/05 bayonet and issued primarily to NCO’s, Pioneers, machine gun crews and, most infamously, the German storm troops known as Stosstruppen. It boasted 29 razor-sharp teeth along its serrated edge and quickly became a favorite amongst there specialist units due to its effectiveness as cutting down bushes and barbed wire. However, it soon became a feared and despised weapon by the Germans and their adversaries alike.

When used in close combat, the serrated edge of the Butcher Bayonet became gruesomely unpopular for the attacker and the victim as when thrust into the enemy it would tear out their insides leading to horrific injuries and agonizing death. In revenge, Allied soldiers began torturing and summarily executing any captured German soldiers found with such weapons. As a result, the German High command made a decision to recall all of the German sawback bayonets in 1917 and grind off the saw back edge before reissuing them to all units.

The Bayonet Charge in Modern Warfare

Since the invention of the bayonet in the 17th Century, the weapon became a feature of various armies throughout the following centuries becoming an iconic feature in conflicts such as the Napoleonic Wars and the First World War. Even as we move into an age of increasing warfare conducted with drone technology, airstrikes, and the like, bayonets are still issued to almost every major army on earth.

Many people don’t realize that the iconic bayonet charge of wars from centuries past, has made a comeback in modern wars up to 2004. You can read about the bayonet charges that have taken place in modern conflicts from the Falklands to Iraq in our article: Bayonet Charges in Modern Warfare.