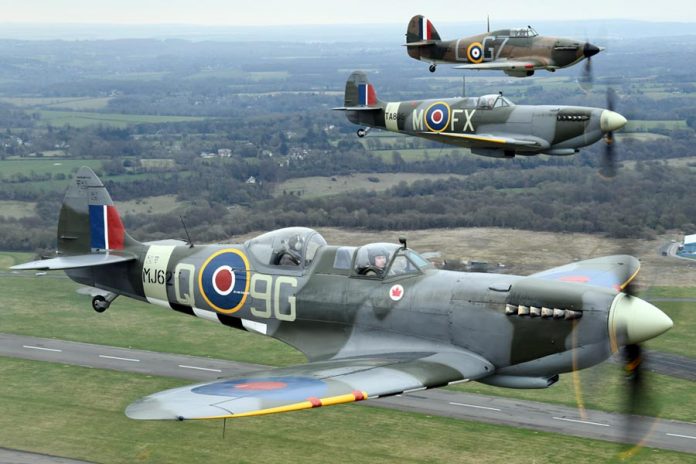 Today, only 60 airworthy Spitfires exist around the world and the image of one cruising through the air over the white cliffs of Dover is enough to pull at the heartstrings of any Englishman. In this article, we’re going to indulge in the dream of many and tell you how to fly a Spitfire.

Throughout the history of England, there have been a small number of weapons and battlefield equipment that have become a quintessential icon of British victories in wars throughout the ages. From the longbow being the English archers weapon of choice during the Battle of Agincourt to the SLR rifle being the winning weapon of the Falklands War. During the early years of WW2, when Britain stood alone against the Nazi tide, the Spitfire plane became an icon of the Battle of Britain and subsequent defence of the realm and became known in post-war years as ‘the aircraft that saved the world’.

“Their hatred of the Germans was quieter and more deadly than I have ever seen before.”

The speed of the German advance during WW2 took the British by surprise leading to a huge shortage of manpower, pilots in particular were hugely sought after. As a freshly trained airman, the Spitfire would have been a formidable aircraft to get to grips with, and learning how to fly a Spitfire needed to be done in about a week. An innovative plane of its time, the Spitfire was faster and more maneuverable than any training aircraft the RAF had available.

It was said that if a newly trained airman in a Spitfire was alive after one week of a learning curve during combat in the Battle of Britain, he had a good chance of seeing the end of the war. To assist these young novice pilots, the RAF would issue a written guide which was simply called ‘Pilot’s Notes’ which briefed British pilots on various instructions focusing on takeoff, climbing to altitude, controlling the aircraft in flight, dealing with mid-flight stalls, diving, and aerobatics. A full transcript can be found on the History Learning Site.

To fly inside or alongside a Spitfire may seem like a pipe dream to many and the reserve of Hollywood movies. However, where there is money to be made the opportunity will always be there. In the UK it’s possible to do both for the right amount of cash. Companies like Go Action Stations specialize in providing Spitfire flights to the civilian market.

Based in the South of England, Go Action Stations offer the chance to affordably fly alongside an original British Spitfire in the same airspace that the Battle of Britain took place. Using a Royal Air Force transport command plane, this trip follows alongside a Spitfire as it demonstrates its maneuverability through the air and giving you a ringside seat of what the skies would have looked like during the darkest days of the 20th century in Britain.

For those with an eye for luxury, the company also offers a more expensive package that allows you to sit inside a Spitfire and take to the skies! Naturally, a trained Spitfire pilot with over 1,00 accumulated flight hours in the Spitfire will be leading the way, but it is the closest chance you’ll get to flying one of these iconic aircraft unless you hold a strong pilots license!

If you enjoyed this article, be sure to check out our range of other pieces on battlefield technology and weapons from centuries past to the present!