Home US & NATO Inside the White House Bunker 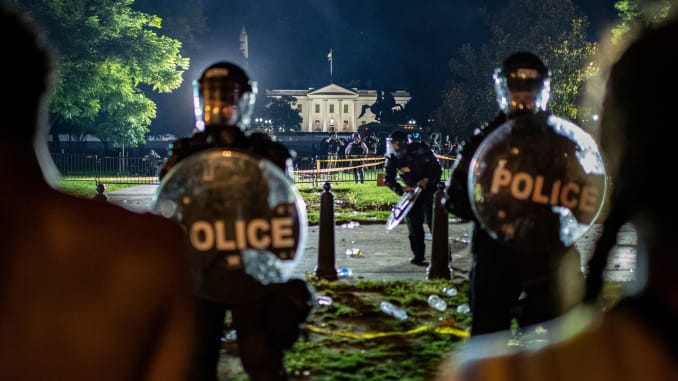 On Friday night, as rapidly escalating riots inched uncomfortably close to the White House, President Donald J. Trump was rushed into the White House Bunker by Secret Service agents where he remained for around an hour whilst security services regained control of the situation. The bunker has not seen emergency use since Dick Cheney was taken inside during the attacks on 9/11. In this article, we’re going to take a look inside this mysterious bunker underneath the White House.

Throughout the latter half of the 20th Century, government bunkers in the West and in the Eastern Bloc were commonplace as the Cold War reached crisis points multiple times. With the collapse of the Soviet Union, most of the bunkers were destroyed or abandoned except for the government bunkers in some capital cities such as Moscow and Washington.

The White House bunker, known as the Presidential Emergency Operations Centre, was first constructed during the Second World War under the Roosevelt administration in order to protect the government in the event of a German assault on the US. Naturally, the bunker has seen a range of upgrades since then.

Of course, the US government is very secretive about the complex and we only know a few confirmed facts about it. Only a few confirmed photos of operations inside the bunker have emerged such as Dick Cheney and his wife Lynne sitting in a meeting room with Secret Service agents during the initial chaos of the 9/11 terrorist attacks. George Bush wasn’t present due to being in Florida during the attacks.

The practical use of the White House bunker during 9/11 revealed that it was in fact largely underprepared for a crisis. Dick Cheney and other White House staff found it difficult to get in touch with vital personnel. Most alarmingly, the bunker was said to have been incapable of housing the amount of staff it did during 9/11, and doing so led to a dangerous rise in carbon dioxide levels within the hermetically sealed bunker.

As a result of this, the Presidential Emergency Operations Centre underwent its most extensive upgrade and modernization under the Obama administration. The project, officially labeled as ‘air conditioning and mechanical systems upgrade’, was highly secretive and rumored to have cost around $375 million. It’s rumored that during this project the bunker was extended to five stories deep and kitted out with high tech communications and computer equipment that would allow a White House team to function undeterred for long, drawn-out periods of crisis.

Shortly after his inauguration as president, Donald J. Trump toured the bunker complex and received a rundown of the standard procedure should he ever have to use it, as he did on Friday.

The bunker was the inspiration for the season finale in the popular US TV Series Homeland. When the main character infiltrated a secure government bunker beneath the Harry S Truman Building with key White House staff whilst wearing a suicide vest.

If you enjoyed this article, be sure to check out our related articles in the Weapons & Tech department.