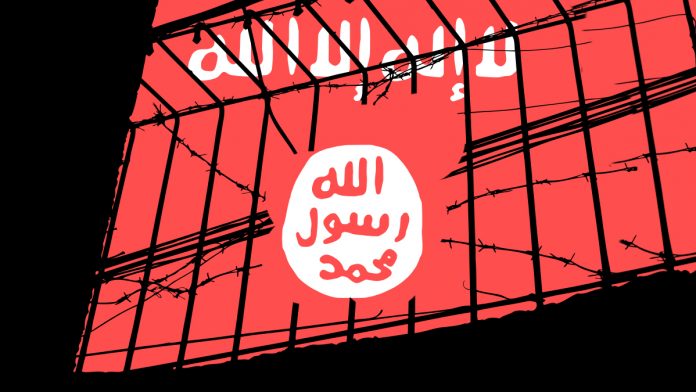 The featured artwork for “Prison Break – The Rising Threat of 10,000 ISIL Detainees” was designed by Olivier Ballou.

In 2019, President Donald Trump declared the Islamic State “100% defeated”. For his ardent supporters in the US, this statement likely brought comfort and a sense of victory. But for those in the Levant fighting room to room in the final ISIL strongholds or maintaining control over the thousands of fanatical prisoners still alive and kicking, it was a statement that was significantly untrue. Throughout Syria in Particular the US has now largely withdrawn and the Kurdish-led Syrian Democratic Forces (SDF) are fighting to keep thousands of ISIL detainees under control.

Whilst the so-called Caliphate is gone territorially and the ISIS flag has been trampled into the ground, the ideology is not, and neither are the bulk of the terror groups radicalized fighters, their wives, and their children. In Syria, the fanatical militants who avoided death or capture by Kurdish-led Syrian Democratic Forces (SDF) forces simply went underground in order to continue their war. Many of those who were captured and imprisoned are now actively trying to break free and join their fellow fighters on the outside.

Across 20 detention centers in northeast Syria, it’s estimated that the SDF is holding 11,000 ISIL combatants. 9,000 are from Iraq and Syria. 2,000 are foreign fighters from 50 other countries across the West and the wider Muslim world. A few days ago, the 1960s-era prison in the city of Hassakeh was taken over by thousands of rioting ISIL prisoners for the second time in two months. During the unrest, a British foreign fighter named Ishak Mostefaoui died in unknown circumstances.

The alarming security issue of a prison break in ISIL detention centers began in October 2019 when the Pentagon announced that President Trump had ordered American forces out of northern Syria. Shortly after, the Turkish offensive into north-eastern Syria began which led to many of the Kurdish fighters guarding the detention centers being redeployed to areas under the threat of Turkish capture. The subsequent lack of SDF guards led to overcrowded and unsanitary prisons that posed a critical security threat with ISIL prisoners eyeing an escape.

The sheer number of ISIL prisoners mean the Kurdish forces are outmanned and do not have the ability to try them. They have begged the home countries of the 2,000 foreign fighters to alleviate some of the weight and repatriate their citizens to face trial in their own countries. However, this is a suggestion that has largely been ignored by foreign governments, particularly during the current Covid-19 pandemic.

In addition to the prisons, Kurdish forces are also being stretched further as they man an array of refugee camps that are home to the radicalized wives and children of ISIL fighters. Some of these camps, such as one named Al Hol, are home to an eye-watering 70,000 people living in appalling conditions. According to the New York Times, counterterrorism officials fear that these camps not only enable ISIS communications and financial networks but are also ideological breeding grounds for the next generation of Islamic extremists. A shocking insight into these camps can be seen in this video by Sky News:

Before they pulled out, the US government claimed to have removed the most high-risk ISIL prisoners from Syria for secure detention abroad. They then lazily handed the responsibility of the remaining 11,000 prisoners over to Turkey. However, the Turkish State classes the Kurdish-led Syrian Democratic Forces as terrorists, and sitting down to negotiate a handover with them is out of the question. That’s assuming Turkey even has the motivation to actually take responsibility for the thousands of ISIL prisoners, which it appears they certainly don’t.

The lack of security personnel is not the only reason behind the wave of escape attempts and prison riots. It’s possible that the unrest is in coordination with a rising wave of ISIL attacks outside the prison walls. Neighboring Iraq has reported a renewed ISIL insurgency being waged against Iraqi security forces and paramilitary units. The terror group may also be seeking to exploit the rising tensions between Shia militias and US forces in Iraq which escalated on Saturday when a US military convoy carrying equipment and logistical materials was ambushed by suspected Iranian-backed militants.

“We’re holding thousands of ISIS fighters right now, and Europe has to take them. If Europe doesn’t take them, I’ll have no choice but to release them into the countries from which they came, which is Germany and France and other places. Would you like some nice ISIS fighters? I can give them to you.”

The unstable situation of continuous prison break attempts by ISIL prisoners combined with a resurgence of an insurgency outside of the prison walls is a threat that needs to be confronted. Despite limited resources and an array of challenges, the SDF forces are trying their utmost best to maintain control.

Prisons like Hassakeh holds between 4,000 to 5,000 inmates. In the event that just one high capacity detention center like Hassakeh falls, it will see a few thousand militant detainees disperse across the Levant and link up with underground fighters meaning the security situation in the Middle East will degenerate even further.

To put such a number of escaping fanatics into context, the Iraqi city of Mosul was embedded with 6-12,000 ISIL militants. It took a coalition of 114,000 troops over 9 months to liberate the city. The Battle for Mosul became one of the most grueling urban battles in the history of modern warfare. If the problem is not addressed, we may see a return to the days of relentless terror and violence being carried out by ISIL, an era that many lives were lost in order to put an end too.

In March, head of the US military’s Central Command Kenneth F. McKenzie Jr. stated that the US is planning to give millions of dollars of aid and training to the SDF in order to assist the critical threats of the detention centers. However, Kurdish leaders pointed out that this is not a long term fix.

In my opinion, a long term alleviation for Kurdish forces battling to control the ISIL prison populations constantly eyeing up a prison break is for the home countries of foreign fighters to take responsibility. Not in a charitable way, but to investigate, try them and jail them. Whilst it’s natural for Western countries to be apprehensive of allowing the return of their citizens who fled to join ISIS and thus present a significant security threat, leaving the undermanned SDF to handle, process, and try them combined with the pullout of U.S. and coalition forces, is a crisis waiting to happen.

Repatriating ISIS fighters to their home countries in order to face trial and detention is vital for the future security of the Middle East. Western countries in particular have the means and manpower to securely detain and isolate these security threats, something the SDF does not. Leaving these foreign fighters in insecure and overcrowded prisons across the Middle East and at risk of prison break only contributes to further radicalization of others and further undermines the struggling local detention systems.