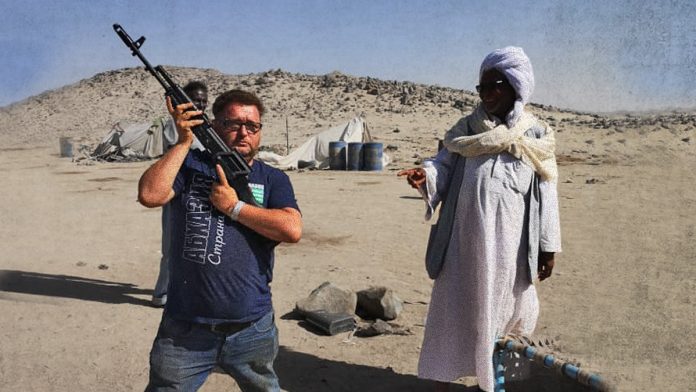 The featured photo for this article on an extreme expedition in Bir Tawil, Kalashnikovs, coup-de-tats, and Russian arms deals was edited by the highly talented Olivier Ballou.

Known for pioneering travel into places like North Korea and running tours to Transnistria, South Ossetia, and other secretive and often war-torn states. In 2019 the team over at Young Pioneer Tours pulled off one of their craziest stunts yet: launching an expedition into the no-man’s-land of Bir Tawil.

Whilst online research claims that the desert territory of Bir Tawil is unpopulated. On their expedition, this group of adventurers found that to be untrue. The Ababda tribe claim Bir Tawil as their nomadic territory and harvest gold there. There are two current threats to their sovereignty: claimants of Bir Tawil with an outdated outlook on international law, and multinational mining companies. When a group of Westerners turned up in pickup trucks, Kalashnikovs were drawn on them and an intense 20-hour standoff began in an unforgiving wasteland that’s far from the reaches of any nation.

However, we’re not here to go into detail about the hair raising tale of these adventurers in Bir Tawil. If you want to delve into the epic story it’s told in detail in the e-book: The Men in No Man’s Land: A Journey Into Bir Tawil written by Dean Karalekas with a foreword by Gareth Johnson who you may remember as the Street Food Guy who had a picnic in Iraq overlooking an ISIS convoy that had just been obliterated in a US airstrike.In this article, we’re going to be analyzing the weapons used by the gold mining tribe, track where they came from and what this tells us about the flow of arms into the surrounding region.

In comparison to the cannibalized Kalashnikovs that are a characteristic feature of irregular forces in countries across Africa, the members of the Ababda tribe are armed with fairly high-end weapons. The first example is a full-size AK-100 series assault rifle. It’s manufactured in Russia and made primarily for export abroad. This is the first clue in our journey through Russian arm research.

The second weapon seen being held by members of the tribe as they accompany the group of adventurers for a group photo after the initial intense standoff had been defused, shows two of the Ababda tribe carrying AK-74M rifles. One of which is fitted with an optic which is vital for operating at a long-range in the wastelands of Bir Tawil, a territory that is around 800 square miles (2,060 square kilometers). The tribe were also armed with dynamite that they use in the nearby gold mines.

The average salary for people in South Sudan is around $1,250 a year according to the Average Salary Survey. The average cost of a well-maintained, Russian arsenal Kalashnikov isn’t cheap and is around the annual salary of a Sudanese person.

So, you don’t need to be a maths expert to figure out that the Ababda tribe is not exactly short on cash. They’ve essentially taken over control of gold mining in Bir Tawil. As well as international mining companies eyeing up Bir Tawil, Africa itself has no shortage of armed and dangerous people keen on alleviating the Ababda of their valuable real estate. Thus, reliable and up to date firepower is required.

Despite rocky relations during the Cold War, modern Russia and Sudan have been friends for years. Vladimir Putin maintained good relations with the recently deposed Sudanese regime of Omar al-Bashir. According to TRT World, around half of Sudan’s arms purchases in 2017 originated in Russia. This made Sudan Russia’s second-largest weapons buyer in Africa. Interestingly, in the same year, a Russian mining firm called M Invest was granted significant access to gold reserves in Sudan. Overall, Russian arms make up 87% of arms in Sudan according to reports by the Stockholm International Peace Research Institute (SIPRI).

As Omar al Bashir’s began to collapse during the 2019 Sudanese coup d’état, he asked his old friends in Moscow for urgent assistance. The Kremlin answered by sending Private Military Contractors, likely in the former of Wagner Group who have been increasingly operational throughout Africa, to Sudan in order to assist and train the security forces fighting for al Bashir. This assistance no doubt saw an increase of Russian weapons being brought into the country. However, the assistance from the Kremlin wasn’t enough to save al Bashir, who was ousted from power in the same year.

Between South Sudan and Bir Tawil, there is no functioning border and you simply drive unchecked from an existing country into a desert wasteland in limbo. You only realize you’re inside Bir Tawil through the use of GPS equipment. This means the smuggling of Russian made weapons from neighboring Sudan is likely rife. The link between Russian weapons imports, Russian gold mining companies, and the Ababda tribes monopoly on gold mines in a territory in limbo highlight the path of these modern Russian arms falling into the hands of the irregular tribal forces in Bir Tawil.

The Ababda Tribe claims Bir Tawil as the Aababda Emirate. We see no reason in arguing with people that have guns.

Either Russian mining companies have struck a deal with the Ababda tribe and supplied them with weapons in order to protect their interests in Bir Tawil or the Ababda have simply used the wealth gained from their mines to purchase high-end weapons from corrupt government forces in Sudan. Either way, they stand head and shoulders above common irregular forces and militias across the surrounding region who are usually confined to the dated, mismatched weapons often seen. The well maintained and up to date Russian weapons also cut a stark contrast next to the haphazard mining environment of Bir Tawil, described in the book as ‘Mad Max Town’.

What’s the story with Bir Tawil?

With the number of territorial disputes going on around the world, the status of Bir Tawil being a territory that nobody wants is certainly a curious one. If you open up a map of the Egypt Sudan border you’ll see that Bir Tawil looks to be part of Sudanese territory, but it isn’t.

Basically, it all boils down to another nearby strip of land called the Hala’ib Triangle which stretches from the Red Sea in the East and meets up with Bir Tawil in the West. The Hala’ib Triangle is the subject of dispute between Sudan and Egypt. Whichever country lays claim to Bir Tawil then loses its claim to the Hala’ib Triangle. Thus, neither side is interested in claiming it. So the Ababda Tribe has rightly taken advantage of geopolitical to mine the territory’s gold.

Our thanks to the guys who went on this insane adventure into the no man’s land of Bir Tawil, live to tell the tale, and allow us to cover the weapons used in one of the least visited places on earth. Be sure to check out The Men in No Man’s Land: A Journey Into Bir Tawil on Amazon for the full story of the hair raising adventure. It’s only $4 and is a fantastic read!