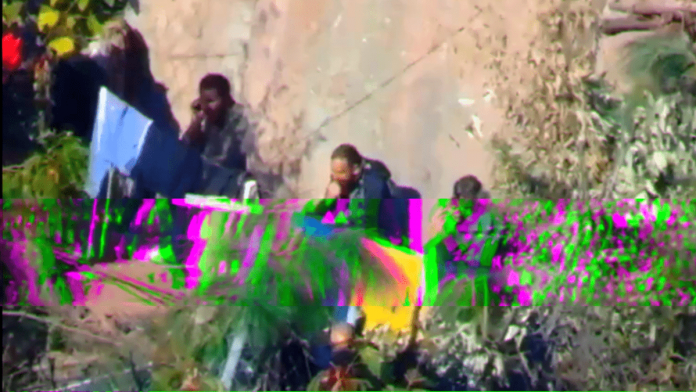 Combat footage from the Line of Control between India and Pakistan in Kashmir shows an Indian sniper launch a coordinated attack on three alleged militants deep in the mountains. In the space of a few seconds, the sniper claims three kills and even cuts the washing line partially obscuring the men in two.

The sniper operation was alledgedly in revenge for a recent Kashmiri separatist attack on Indian troops in the region. Interestingly, the Indian sniper can be heard saying “Glory to King Shivaji” before opening fire. A reference to the 17th century Indian warrior-king Shivaji Bhosale who was famous for carving out an enclave from the declining Adilshahi sultanate of Bijapur that formed the genesis of the Maratha Empire.

The Insurgency in Kashmir

The incident took place along The Line of Control (LoC) which is a military control line between the Indian and Pakistani controlled territories of the former state of Jammu and Kashmir. The LoC is not legally recognized as an international boundary but instead serves as the de facto border. Originally. the LoC was known as the Cease-fire Line, but after the signing of the Simla Agreement in 1972, when it was redesignated as the Line of Control.

Indian and Pakistani military presence in Kashmir is the subject of a long-running and widespread revolt largely carried out by Kashmiri Muslim groups. One of these groups is the Jammu and Kashmir Liberation Front (JKLF) whose aim is to secure the independence of a secular Kashmir through a campaign against Indian and Pakistani rule.

The main reasons for separatism in Kashmir is interesting. The anti-Indian aspect stems from the fact that Kashmiris desire Kashmiri nationalism over Indian nationalism which naturally puts them at odds with India. The anti-Pakistan aspect is a result of Kashmiri’s desire for a secular state which, despite both being largely Muslim, puts them at odds with the Islamist ideology that defines Pakistan.

Another root cause of separatism in Kashmir is the various conflicts that have been waged between India and Pakistan in the region. Kashmir is the site of a major territorial dispute between Pakistan and India. Various skirmishes have been fought there resulting in widespread destruction and death for the people who live in the region.

So initially, the insurgency that sprung up in Kashmir was equally directed at Pakistani and Indian forces. However, before long it was soon channeled into Indian forces alone. This was largely due to covert operations carried out by the Pakistani intelligence services who managed to successfully infiltrate various insurgent groups. Once inside, the Pakistani infiltrators set about replacing Kashmiri nationalists with Islamists to change the aim of the insurgency from Kashmiri separatism to merging with Pakistan.

– Fatimah Asghar, If They Come for Us

The subsequent war between the Indian military and Pakistan backed militants has led to almost 50,000 combatants and civilians killed on both sides. Additionally, almost 3,500 people have disappeared in the conflict. The war shows no sign of ending soon. In 2020, clashes between Indian military and local insurgents have killed well over 200 people.