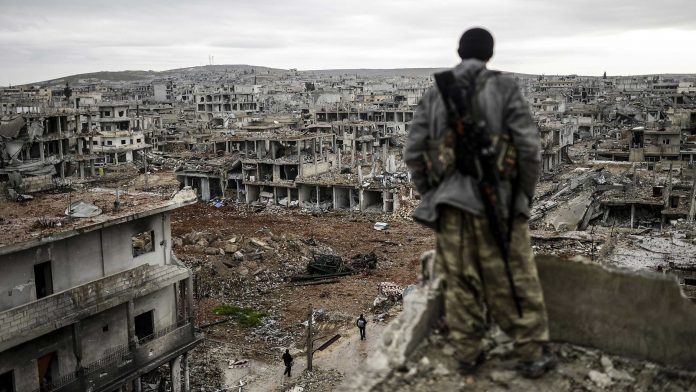 The latest addition to our combat footage section took place in the countryside around Raqqa, Syria. Fighters of the Syrian Defence Force (SDF) were negotiating the surrender of several surrounded ISIS fighters. The surrender was a trap from the beginning as the ISIS fighters proceeded to launch a murderous suicide charge against the SDF which ended in a number of the ISIS fighters being blown across the battlefield as one suicide vest detonated triggering the suicide vest being worn by the other fighters.

The shrapnel and body parts released by the detonation of the suicide vest causes the SDF to seek cover. Interestingly, one of the SDF fighters in frame calmly records the event only moving for cover when the explosions break out.

Who’s who in the suicide vest video?

SDF stands for the Syrian Democratic Forces. They are an alliance composed primarily of Kurdish, Arab, and Assyrian militias, as well as some smaller Armenian, Turkmen, and Chechen forces. The SDF is militarily led by the People’s Protection Units, a mostly Kurdish militia.

ISIS needs little introduction. It stands for the Islamic State of Iraq and the Levant. Officially known as the Islamic State and also known by its Arabic-language acronym Daesh. ISIS is a militant group and a formerly unrecognized proto-state that follows a fundamentalist, Salafi jihadist doctrine of Sunni Islam. Its followers have carried out a range of horrifying crimes against humanity during war and peace.

What’s the story behind the Syrian Civil War?

The Syrian civil war began in 2011 and continues to rage into its tenth year. It’s being fought between the Ba’athist Syrian Arab Republic led by Syrian President Bashar al-Assad, along with domestic and foreign allies such as Iran and Russia, and various domestic and foreign forces opposing both the Syrian government and each other in varying combinations. The war is currently the second deadliest of the 21st century.

If you have a different theory as to what happened in the video or would like to add your take on the incident, feel free to comment below.