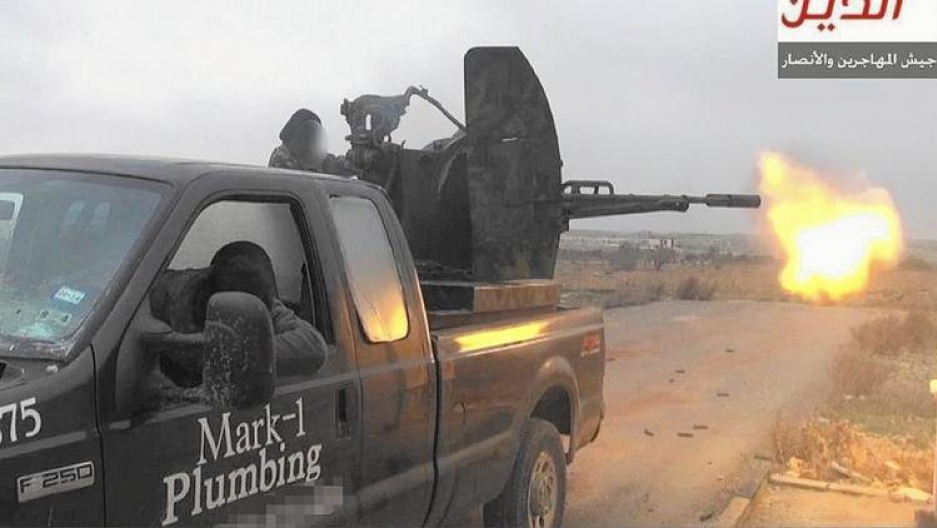 I’ve run a few businesses in my time and it ain’t easy. One of the most important aspects of modern business is marketing and reputation. One bad TripAdvisor review or poor Google rating can have a hugely adverse effect on your business. But for Mark Oberholtzer, his company name took a hit when the Texas plumbers business logo and phone numbers appeared on a heavily armed technical in a Jihadist propaganda photo taken in Syria.

Mr. Oberholtzer has no doubt had to contend with some tricky situations in his business career as a plumber, but I doubt any of them required a 23mm twin barrelled anti-aircraft cannon mounted to this Texas plumbers Ford pickup truck. This is exactly what was shown in the photo of his truck with his company logo of Mark-1 plumbing still on the side that was tweeted by a Jihadi militant.

The Texas Plumbers Ford F-250 made its way to the Syrian Civil War through the same route that many Jihadists from around the world make: through Turkey and over the Syrian border. Mr. Oberholtzer sold the truck with his company name on to a car dealership in Houston, Texas back in 2013. Although he tried to remove his company logo, he was stopped by a dealership employee who feared he would damage the paintwork on the car. The dealership promised they would professionally remove it, but they never did.

A month after Oberholtzer sold the car to the dealership it was resold at auction and shipped out to Mersin in Turkey. The Ford truck subsequently found its way over the Syrian border where it fell into the hands of Jihadists aligned with Ansar al-Deen. It was fitted with an anti-aircraft gun and sent into combat in the Syrian civil war.

The Ford F-250 with Oberholtzer’s business logo and phone number reappeared online when it was featured in a tweet on the 15th of December, 2014. The following day Comedy Central used the photo in the final episode of ”The Colbert Report” which drew in over 2.5 million viewers.

Unfortunately, this led to thousands of people from around the world contacting Oberholtzer’s business and personal numbers listed on the side of the truck. Amongst these calls were serious death threats by ignorant viewers who somehow came to the false conclusion that Oberholtzer had supplied the truck to Jihadists on purpose. The threats led to Mr. Oberholtzer to close his business and take his family into hiding.

Oberholtzer and his family were paid visits by both the FBI and the Department of Homeland Security. Both of whom were keen to get to the bottom of the story and know if he had anything to do with the truck’s transportation to Syria.

Pickup trucks have been a feature of modern warfare since the 1970s and are prominent in conflicts across the Middle East and North Africa. Known as ‘technicals’ in war terminology, they are usually comprised of a light pickup truck with four-wheel drive and a heavy weapon mounted to the rear. The weapon can range from heavy machine guns like the DShK to multiple launch rocket systems.

However, it’s Toyota that is usually the iconic brand of pickup trucks being used by guerillas and insurgents. Back in 1987 at the height of the Chadian–Libyan conflict, Toyota trucks were used in huge quantities to provide fast-moving firepower. They were used to such an extent that the war was nicknamed ‘the Toyota War’. Internet jokers even made an adapted Toyota commercial featuring ISIS propaganda footage.

Mark Oberholtzer now carries a weapon for protection due to the threats received. He is launching legal action against the car dealership which failed to remove the Texas plumbers’ business logo from the truck before sending it abroad. Subsequently placing huge amounts of stress on him, his family, and his business. He aims to sue the dealership for more than $1 million in financial losses.