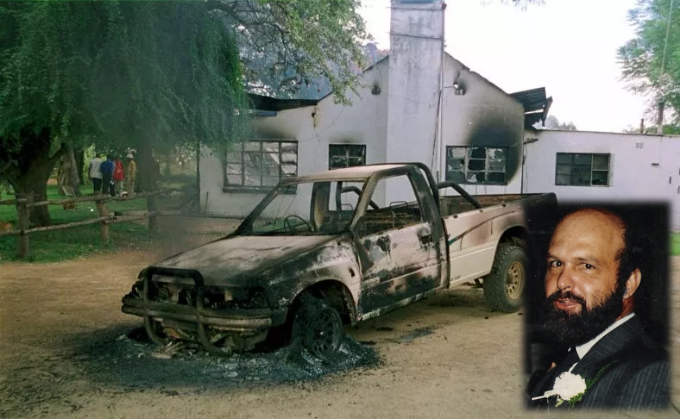 20 years ago today, the infamous attack on Martin Olds took place. One man with limited ammunition single-handedly held his ground against a heavily armed force of 70+ men. It took place in the former country of Rhodesia now called Zimbabwe.

At 04.00, on 18 April 2000, emergency personnel at the ambulance center in Robert Mugabe Way, Bulawayo, looked on curiously as a convoy of no less than 13 vehicles including cars, pick-ups and minibusses sorted itself out on the opposite side of the road.

The men there were not the usual rag-tag of out-of-work types. These were well-armed with AK-47s and had a purpose and demeanor about them that suggested honed military skills and recent training.

ZANU-PF had bussed this Shona-speaking group in from Mashonaland, especially for the task to hand. They were commanded by the infamous Comrade from Karoi and were stiffened by regular CIO or army personnel from the North Korean trained 5th Brigade. They were a hit squad.

This ominous convoy passed by the police station and waved knowingly to the police on their way to Martin Olds farmstead. The police, who in turn were armed with FN rifles, were clearly expecting the hit squad and put up a roadblock immediately after they had passed through to prevent any help from reaching Martin while he was under attack.

Just before dawn, this convoy from hell arrived at the workers’ compound. They rounded up the employees including Jukumani Sibanda, who had worked for Martin for 10 years and placed them under armed guard.

The well-organized hitmen then completely surrounded the farmhouse security fence and ‘set up seven firing positions’. Martin Olds phoned a neighboring farmer and told him he was surrounded by between ’30 to 40′ well-armed veterans and that the position looked pretty serious. There were in fact, at least 70 attackers.

Martin Olds then made the decision to walk out unarmed to speak to them; no doubt hoping to diffuse the dangerous situation. In reply, he was immediately shot in the leg shattering the bone. Under fire, through sheer will power, Martin somehow managed to make it back into his house where he quickly made a splint for his leg using two planks to enable some continued mobility.

He fought for his life, sending out an SOS on his CB radio while moving from room to room and returning the fire of his attackers. The walls of his modest home were soon peppered with bullet strikes. “He was a trained soldier salted by combat from the Bush War, even though that was 20 years before. He was gutsy to boot and knew what he was doing.”

Realizing his attackers would cut the phone line, Martin quickly made another call to his neighbor explaining he had been shot and asked that an ambulance be called. This ambulance was prevented from reaching Martin by the armed police roadblock.

Not realizing the complicity of the police, he then phoned his mother, Gloria Old’s, who lived in the area and asked her to phone the police. Although she did this four times the police failed to respond.

They cut the security fence, advanced on the house, and threw flaming Molotov’s, intending to burn him out. Martin fought a desperate rear-guard action although his weapons were no match for the automatic AK-47’s, many of which were loaded with armor-piercing bullets.

He had kept his own weapons loaded which enabled him to switch from one to the next. He was a crack shot, especially at close range. The battle lasted five hours during which he wounded and killed numerous of the veterans.

The ambulance called for Martin was forcibly detained at the police roadblock. They were then ordered to treat wounded “veterans”. Meanwhile, the remaining attackers had set the house ablaze. Martin sheltered in the bathroom by filling the bath with water to avoid the intense heat and flames but eventually, he was forced to exit via the window and crawled along the side of the house, dragging his splinted leg behind him. Because of his resistance, his attackers took their revenge on his bullet-riddled body and savaged it with iron bars and axes.

Because the Zimbabwe government was deeply embarrassed by their casualties and the fact that it took several hours for their elite 5th Brigade to finally overcome Martin, they officially claimed only a few wounded.

However, eyewitnesses reported fleets of ambulances and other vehicles to cart away the 5th Brigade dead and wounded. Military Intelligence in Pretoria claimed that Martin killed at least 18 of the attackers and wounded and a number of others.

It is understandable why from both perspectives, that of the Mugabe regime and from the farming community, they both wanted to downplay the casualties of this several-hour gunfight, but realistically, a Greys Scout would not have been able to keep a company of well-armed 5th brigade attackers at bay for hours without causing numerous casualties.

Also, because of restrictive Zimbabwe laws, gun owners were limited to something in the region of only 120 rounds of ammunition at any one time. Martin ran out of ammunition as a result.

For related articles on the wild goings on across Africa check out our Global department.