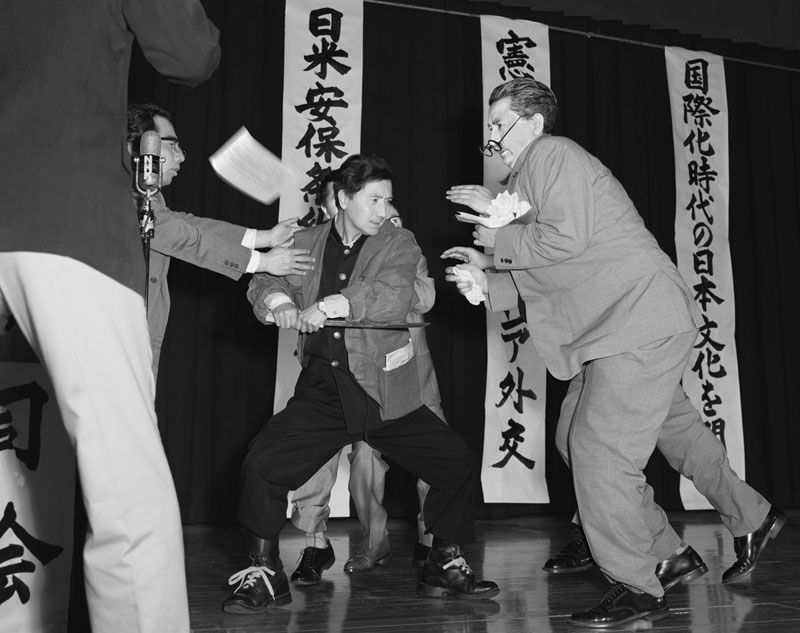 Samurai weapons and political assassinations – On the 12th of October 1960, at Tokyo’s Hibiya Hall, political debate was taking place before Japan’s parliamentary elections. A prominent local politician at the debate was Inejiro Asanuma, who was then the leader of the Japan Socialist Party. Asanuma was known for his support of the Communist Party of China and was fiercely critical of relations between the US and Japan. Asanuma took the stage to deliver a speech, but he would not leave it alive.

Present at the rally were around 100 members of the Great Japan Patriotic Society which were an extreme right-wing group of the era. Among them was Otoya Yamaguchi, a young Japanese ultranationalist who was armed with Samurai weapons and murder on his mind.

Yamaguchi was armed with a yoroi-dōshi sword, also known as an “armor piercer” or “mail piercer”, it’s one of many traditional Japanese Samurai weapons worn by the Samurai in feudal Japan. Yamaguchi rushed the stage and plunged his yoroi-dōshi into the stomach of Asanuma at high speed, killing him.

Otoya Yamaguchi was captured alive and detained in a detention facility for juveniles. A few weeks later, he used a mixture of toothpaste and water to write a message on his cell wall in reference to the final words of Kusunoki Masashige, a 14th-century Samurai: “Seven lives for my country. Long live His Imperial Majesty, the Emperor!”. Yamaguchi then hung himself. He was subsequently celebrated as a martyr by right-wing groups in Japan and abroad.

Following the assassination, left wing protestors held a 15,000 strong march on the Tokyo police headquarters. They demanded that the chief of police resign due to the failure to provide adequate security to protect Asanuma. In response, the Tokyo police went head to head with march and acively beat them back which caused servere injuries to almost 100 people.

Incredibly, the assassination was caught on camera and film. The photo captured the crucial moment of the sword being removed by a man called Yasushi Nagao, with this photo he would go on to win the Pulitzer Prize and the World Press Photo Award.

The legacy of the assassination reached far across the world. Interestingly, Soviet Russia and Communist China reacted swiftly today to the assassination of one of their comrades. Tass ( the Soviet news agency) stated: “Fascist thugs have committed a vile horror.” The New China Agency stated that Asanuma had been murdered by “a hired gangster.” America, on the other hand, classed Asanuma as a sworn enemy of the United States. Whilst they publically condemned his death, behind the scenes it’s believed they feared that Asanuma and his views had been martyred in a way that may strengthen the emotional appeal of his views. Later on, the Novellas of Seventeen and The Death of Political Youth by the Nobel Prize-winning author Kenzaburō Ōe were both based on the actions of Yamaguchi.

In 2018, the event was even reenacted in New York City. It was part of a stunt by the right-wing activist Gavin McInnes, who was seen leaving the event holding a Samurai sword prop. The day after, McInnes posted on a photo on Instagram featuring the infamous photo of the moment Yamaguchi pulls his sword from Asanuma’s body. On the photo, Mcinnes had added the words, “Believe in something. Even if it means sacrificing everything. Just do it.”

On the 50th anniversary of the assassination in October 2010, right-wing groups celebrated the event in Hibiya Park. Today, the National Police Agency of Japan believes that there are over 1,000 right-wing groups in the country with about 100,000 members.

For more similar articles, check out our assassinations, terrorism, and drugs department!