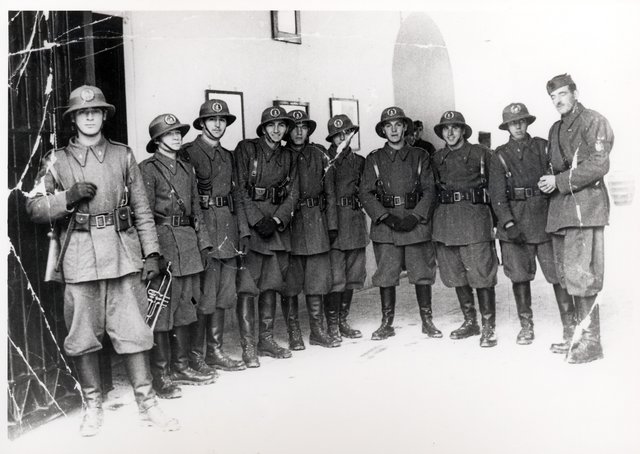 During the 1930s, as Germany and Italy had both fallen under the reign of Fascism, the two countries decided to become allies. On May 22, 1939, an infamous agreement known as the Pact of Steel was signed. This formalized a strong military and political alliance between Hitler’s Germany and Mussolini’s Italy. Over a year later, Japan would join the pair through the signing of the Tripartite Pact leading to the formation of what would become known as the Axis alliance.

Throughout the 1930s, Germany had started it’s expansionist visions closer to home, annexing places like Austria and the Sudetenland. Italy’s ambitions, however, lay further afield. In the late 1930s, Mussolini launched invasions of places like Ethiopia in East Africa and implemented Fascist Italian rule complete with a colonial police force that was very effective at subduing the native African population.

The Italian Unit was known as Polizia dell’Africa Italiana which translates to the Police of Italian Africa (PAI). Unlike the stereotypes surrounding regular Italian army forces, the PAI had a strong reputation for discipline and exceptional levels of training. They were often issued with the best equipment Italy had to offer, often moving on Moto Guzzi motorcycles and armed with Beretta M1938A sub-machine guns. Based at police HQ’s in major African cities like Tripoli, Addis Ababa, and Mogadishu, the PAI utilized native Africans alongside its Italian agents.

Around the same time, the Third Reich’s true motives were in motion and the capture of Western Europe and invasion of the Soviet Union were underway. The Nazi high command, especially the SS, observed their allies tactics in Italy and was keen to create a colonial police force to rule in distant territories that were destined to be captured through their ‘1,000 years long Reich’.

Over the course of 18 months, the Nazi government dispatched around 400 SS officers to the esteemed PAI training school in the Italian city of Tivoli located south of Rome. They were put through months of rigorous training and upon graduation, the SS officers were presented with a dress dagger personally awarded by the Italian police commander and founder of the PAI: General Marraffa. On the global militaria collectors market, the daggers are extremely rare due to the very limited amount being made.

As the Second World War progressed, the project lost its momentum but was loosely implemented in places like the Eastern Front, as Nazis utilized small groups of collaborators in order to police the local population as well as hunt down Jews, Gypsies and partisans in hiding. A prime example of this was in Ukraine when shortly after the capture of the country during Operation Barbarossa, Heinrich Himmler created The Ukrainische Hilfspolizei or the Ukrainian Auxiliary Police. Comprised mostly of former members of the anti-Soviet and anti-Semitic Ukrainian People’s Militia, it’s officers primarily engaged in the murder of Jews and in anti-partisan warfare across Ukraine.

As the tide began to turn against the Axis forces in 1943, Italy surrendered following the Allied invasion in the South of the country. But due to German forces still holding significant territory in the Central and Northern regions of the country, a puppet government was installed known as the Repubblica Sociale Italiana or Italian Social Republic (RSI).

Many members of the PAI, led by their founder General Marraffa, turned on German troops in a futile attempt in the wake of the Armistice of Cassibile. The German forces soon overwhelmed them and in revenge for his betrayal, General was captured and sent to his death in the Dachau concentration camp.

What was left of the PAI was transferred to the capital Rome and absorbed into the Republican National Guard, where they assisted the RSI government in local control and security in the face of the encroaching Allied advance. As Fascism was defeated, the PAI faded out of existence.

For an in-depth look at what the years after WW2 brought for many former Nazi soldiers, check out our article 8 Wars That Featured Former Nazi Soldiers.

The inspiration for this article came from the team at Regimentals who uploaded a video of their visit to the ‘Show of Shows’ in Kentucky, where they managed to acquire an original ceremonial PAI dagger issued to an SS officer.