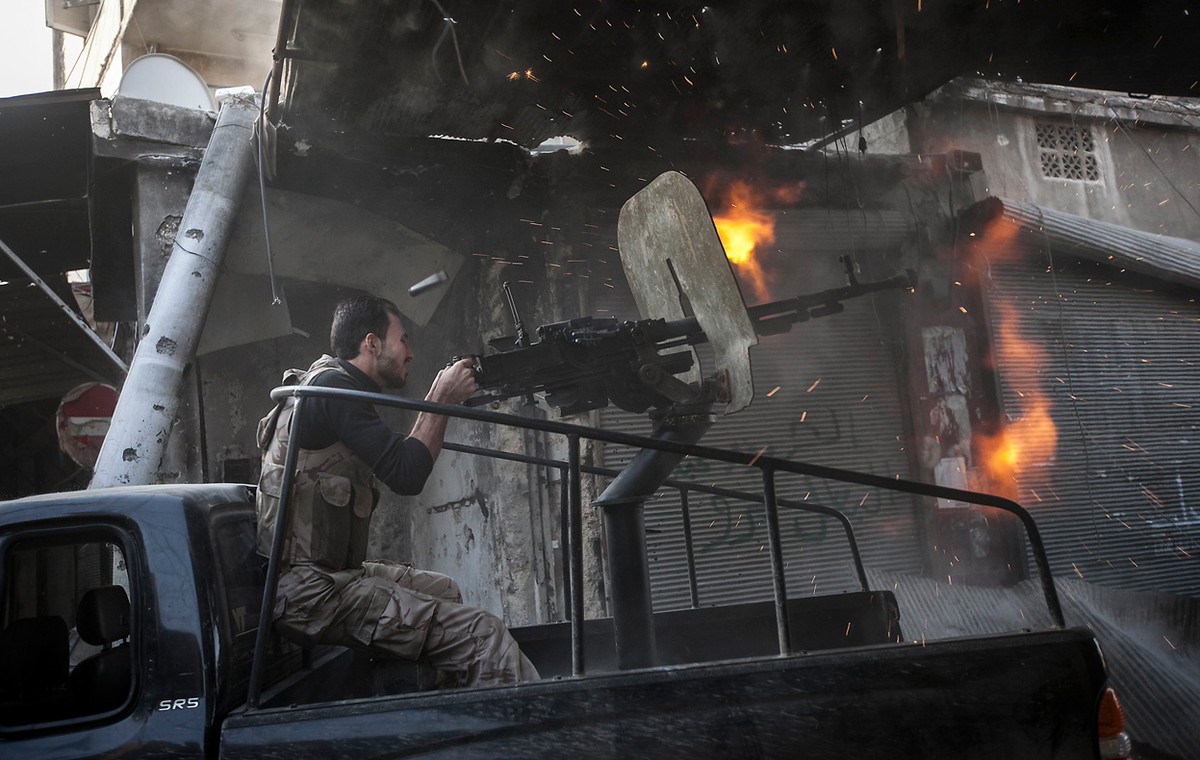 At Reaper Feed, we’ve all worked in conflict zones and it’s no secret that Toyota trucks are a feature of warzones everywhere in the world. We often joked about the Toyota war, with allied forces using largely Toyota land cruisers and insurgents using largely Toyota Hilux. In this article, we’re going to look at the backstory of the Toyota in war as well as a few examples of some of the craziest improvised fighting vehicles we’ve seen in modern warfare.

In 2014, during the rise of ISIS through Iraq and Syria, the image of convoys of Toyota Hilux technical raised questions as to why the hell the terror group was in possession of so many Toyota Hilux. However, Toyota has been a symbol of war for decades especially amongst insurgent groups.

Tough, durable, fast, and maneuverable, the Toyota Hilux has been a militant favorite for decades. It’s seen action in places like Nicaragua, Ethiopia, Rwanda, Liberia, Afghanistan, Pakistan, Lebanon, Yemen, and Iraq. Basically, if there are civil wars and conventional warfare, there will be a Toyota Hilux technical. When fitted with a truck-mounted machine gun or an anti-aircraft gun, this turns into a formidable vehicle capable of providing fast-moving firepower.

However, ISIS obtained so many Toyota Hilux technicals that it soon became a brand associated with the terror group. It’s unclear how ISIS obtained so many of the vehicles, but it’s suspected they’re purchased through middlemen who smuggle Toyota vehicles into the region. The iconic images resulted in this spoof Toyota ad being made with ISIS propaganda footage:

In recent years, footage and photos have streamed out of the civil wars in Syria, Iraq, Libya and Ukraine providing an insight into the various improvised fighting vehicles used on the front lines of global wars.

The first photo was taken in Libya and shows an improvised fighting vehicle in the form of a Toyota Hilux fitted with a Katyusha style rocket launcher. For navigation, the Libyan rebel fighters are using the compass app on a Samsung Galaxy phone to direct their rocket fire onto the enemy.

The second photo was taken during the battle for Homs, Syria, and shows a vehicle mounted machine gun in the heat of combat during the close-quarter battles in the narrow streets of the city.

The third photo shows a seemingly endless convoy of Toyota Hilux vehicles which had been obtained by ISIS forces during their early advances through the Middle East. Images like this forced the US government to question Toyota on how such terror groups were obtaining such huge amounts of their vehicles.

In the next image, we see a rebel fighter protect his ears as he observes an improvised rocket launcher in action that’s been fitted on the back of a Toyota. This was believed to have been taken sometime during the Libyan Civil War.

The sand-colored commercially produced Toyota Hilux in this photo belong to the Russian military and were photographed during the Victory Day military parade in Moscow. With an added armored cupola for a rear gunner, the vehicles were spotted in active service during Russia’s campaign against ISIS in Syria and were favored due to their fast maneuverability and ability to cross weak or damaged bridges that tanks and APCs were not. The Defense Blog wrote an excellent article on these Russian Toyota Hilux.

In classic racecar red, this Toyota Hilux manned by fighters in the Libyan civil war is armed with the rocket pod of a Soviet Mi-24 Hind gunship. It’s been fitted with a crude rope and pulley system in order to aim the cumbersome, but deadly piece of Cold War equipment.

This example of a Toyota Hilux is fitted with the Soviet heavy machine gun, the DShK which packs a hell of a punch, and during the Cold War, it was often mounted on Soviet Army battle tanks. This particular photo was taken during the Somalian Civil War of Black Hawk Down fame.

If you enjoyed this article, explore Reaper Feed further through our related articles in our weapons and tech section covering the greatest and worst things used on global battlefields.