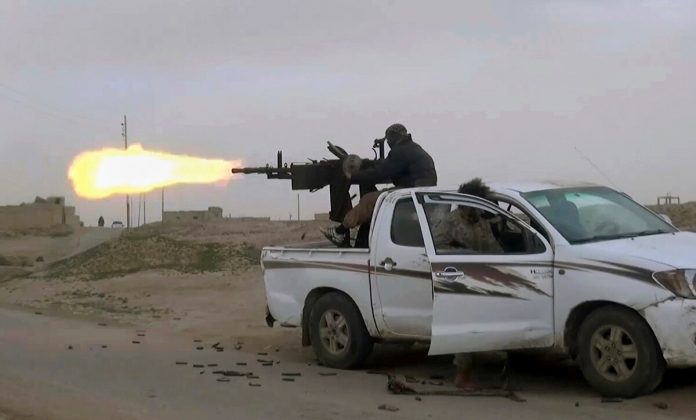 In the years following 2014, ISIS became one of the most terrifying terrorist forces on earth. As well as waging a bloodthirsty war across Iraq, Syria, Egypt, and Libya, ISIS was capable of striking at any time anywhere in Europe and the USA. Rich and highly organized, this was a terror machine that was unseen in modern warfare. But what is ISIS? In this article, we’ll give you the Reaper Feed lowdown on the terrorist group from hell.

ISIS is a Salafist Islamist militant group as well as a formerly unrecognized state that existed between the borders of Syria and Iraq. Following their campaign to capture vast swathes of territory across Iraq and Syria to form their ‘Islamic State’, ISIS began to conduct ruthless ethnic cleansing campaigns as well as brutal executions of prisoners of war, aid workers, and international journalists. Subsequently, ISIS was branded as a terrorist group by the UN.

What Does ISIS Want?

The aims of ISIS can be summed up in three points. Firstly, one of the main aims of ISIS was to control territory in order to realize its ambition of the creation of an ‘Islamic State’ where Muslims can live under the group’s 8th-century interpretation of the world under their version of the rule of Sharia Law.

If this is successful, it can build an army to move and capture more territory and expand its Islamic State. In the ISIS vision of the world, there is no place for non-Muslims who are given the choice to join or die as was evidenced during their rule in Iraq and Syria.

The overall aim of ISIS is a global Islamic caliphate and a wholly Islamic world which would be achieved through their tactic of territory building, army building, and the religious cleansing of those who refuse to submit.

How Did ISIS Start?

The ISIS we know appeared on international media in the summer of 2014, however, ISIS emerged back in 1999 when the group formed as an allied force of al-Qaeda under the name of Jama’at al-Tawhid wal-Jihad (JWT) which translates as Organization of Monotheism and Jihad. The initial intention was to overthrow the ‘apostate kingdom’ of Jordan. This failed and following the US invasion of Iraq in 2003, JWT moved into war-torn Iraq and became one of many active insurgent groups fighting the US and coalition forces.

In 2014, three years after the US pulled most of its troops out of Iraq, the largely decentralized JWT split from al-Qaeda and launched the largely centralized ISIS. The group declared itself a worldwide caliphate with religious, political, and military authority over all Muslims in all corners of the world. Whilst many Islamic terror groups had declared similar, ISIS put it into practice when they launched a lightning offensive across Iraq and Syria that overran US-trained Iraqi forces and the already embattled Syrian Army.

As well as capturing significant cities such as Mosul and Tikrit, the terror group also captured oil refineries, hydroelectric dams, and border crossings. By December 2015, the terror group held territory home to around 12 million people.

The success of ISIS attracted fighters and allies from all over the world and soon had terror branches in 18 countries across 4 continents. In its territory, it had over 30,000 heavily armed fighters. Due to the capture of various oil fields, the terror group is believed to have had an annual budget of over $1 billion, which was used to fund its war as well as gruesome terror attacks around the world.

What Does ISIS Stand For?

The precursor to ISIS, Jama’at al-Tawhid wal-Jihad, was founded by a Jordanian Islamist named Abu Musab al-Zarqawi who missed his chance to be a veteran of the Soviet-Afghan war when he traveled to Afghanistan but found the Soviets had left by the time he arrived. However, he received various terror training in the country from al-Qaeda and met Osama Bin Laden, where it is said that the two didn’t get along due to the extremity of al-Zarqawi’s highly murderous views. After a string of grueling terror attacks during the noughties, Abu Musab al-Zarqawi was obliterated in a US airstrike in 2006.

As ISIS stormed to power in 2014 the figureheads of the group, known as the Shura Council, knew the terror group needed a figurehead or Caliph. They chose Iraqi born Abu Bakr al-Baghdadi. The evil of his reign would be defined by religious genocide, human rights abuses, torture, sexual slavery, and terror attacks around the world. By 2017, al-Baghdadi had a price on his head of $25 million.

In 2019, US special forces cornered al-Baghdadi in a compound in the Syrian province of Idlib. As he tried to escape through a tunnel, he realized he was trapped and detonated a suicide vest he was wearing, killing two of his children in the process.

In 2020, ISIS is a shadow of what it was during the height of its power. After a long and blood-soaked campaign carried out by the Syrian Army, Iraqi Army, Kurdish Militia, all backed up by coalition airstrikes and special forces, ISIS lost huge amounts of its territory and ceased being a conventional military force, returning to guerilla tactics through terror attacks and suicide bombings using post apocalyptic style heavy trucks full of explosive.

The huge numbers of ISIS prisoners captured by Iraqi, Syrian, and Kurdish forces pose a huge problem for the Middle East and the wider world. Especially due to the fact that many are foreign fighters from countries such as Germany, Russia, and the UK. One of the most high profile cases was that of Shamima Begum, a teenage British Muslim girl who traveled to Syria only to be captured and is now stateless in a refugee camp.

Following the death of al-Baghdadi, a man named Abu Ibrahim al-Hashimi al-Qurashi was appointed as the group’s new Caliph but has remained a largely shadowy figure in comparison to the visible leadership of al-Baghdadi. Despite its losses in Syria, the group still has operational terror cells around the world and remains a significant threat to world peace.

For related articles on terrorism around the world, be sure to check out our terrorism department.