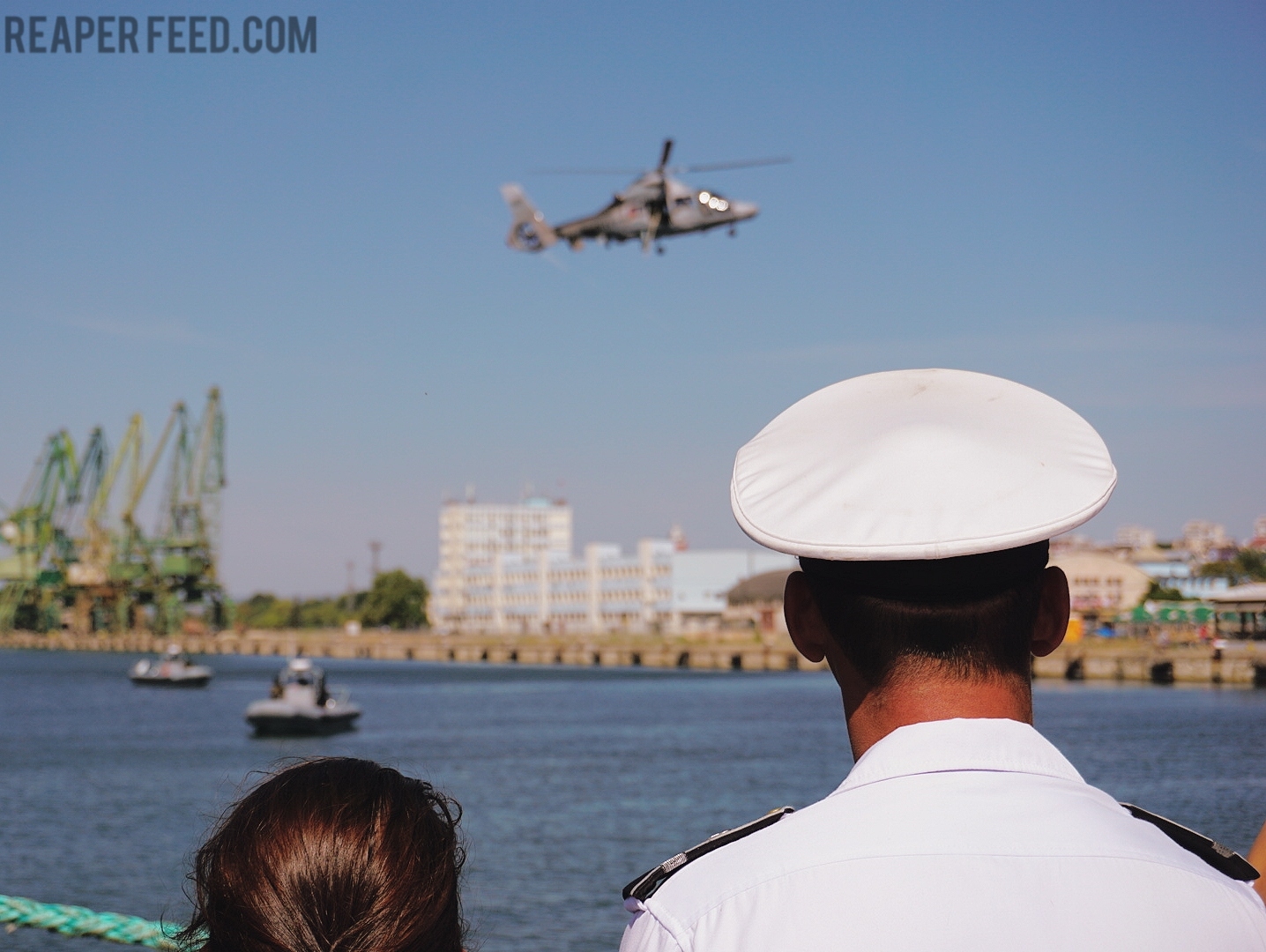 I recently found myself on the Bulgarian Black Sea coast with work. Luckily, my dates coincided with the day that celebrates the Bulgarian Navy. Otherwise known as Navy Day, it falls on the second Sunday of August every year. To celebrate, the pride of the Bulgarian Black Sea fleet moors up at the Black Sea Port city of Varna and opens their gangplanks to the public and puts on an impressive display of military exercises. This was something I wasn’t going to miss.

At the Port of Varna, the sun was scorching and three mighty warships of the Bulgarian Navy were on show. I was greeted with an eager crowd waiting to see the display. Suddenly, the ground began to rumble with incoming aircraft and two Eurocopter AS565 Panther helicopters came swooping in across the harbor. With the Panthers covering the air, two powerful rib boats manned by Bulgarian Special Forces moved across the water. Their target? A static ship that was currently under the control of Bulgarian troops in balaclavas posing as pirates/terrorists.

The enemy-held ship was rapidly stormed and the roar of blank firing Kalashnikovs filled the air. One unfortunate ”pirate/terrorist” was taken down with a swift chokehold and thrown overboard into the waters of the Black Sea Port, much to the delight of the crowd. The boat was quickly captured and the defenders who hadn’t been thrown in the water fled across the port wildly firing their AK-47s behind them. Their escape attempt led to more military exercises kicking off nearby.

The Bulgarian Eurocopter AS565 Panther helicopters which had been circling overhead proceeded to fast-rope special forces on to the ground to intercept the fleeing bad guys. Who, like their comrades before them, were quickly and unceremoniously taken down and thrown into waiting vans and a nice Bulgarian army variant of the Mercedes Benz G-Wagon. All in all, it was a seriously impressive display. Fun fact! One of these Bulgarian Eurocopter AS565 Panther helicopters were featured in The Expendables 3.

Walking along the Black Sea Port and taking in the warships, I came to a tent manned by the Bulgarian Army which had an array of weapons on display which the Bulgarian soldiers were keen on handing over for you to handle. As well as Night Vision Goggles (NVGs) and body armor, the tent had an array of Bulgarian Kalashnikovs, Dragunov Sniper Rifles, Makarov Handguns, and the odd one of the pack, a Heckler and Koch G3 rifle with a lovely suppressor attached.

Being a man of fine firearms culture and limited on time at this point, I chose my photo opportunity wisely and picked up a lovely Bulgarian-made Kalashnikov with a bakelite magazine and fitted with a GP-25 Kostyor 40mm grenade launcher.

Interestingly, despite being part of NATO and the European Union, the Bulgarian armed forces still use a large stock of Communist-era weaponry made by the Arsenal Plant in Kazanlak. Even the sailors on parade on the ship’s decks were armed with Bulgarian-made Kalashnikovs from the Cold War and had communist-era Kalashnikov bayonets hanging from their belts.

The reason for the outdated image is pretty simple. When Bulgaria joined NATO its armed forces were required to undergo a series of reforms that would enable it to comply with NATO standards. Whilst the Bulgarian Army and Air Force did so, the Bulgarian Navy was largely overlooked due to two reasons. Firstly, to reform the Bulgarian Navy would cost a fortune and this is money that Bulgaria doesn’t have. Secondly, national security concerns for Bulgaria are not focused on Naval invasions, so the cost of reform is just not justified.

However, the Bulgarian Navy did undergo some small reforms which could be seen at the Navy Day Military Exercises. Two of the ships on display were the BG Drazki and the BG Smeli. The BG Drazki (Intrepid in English) was originally a Belgian frigate that the Bulgarian state bought from Belgium in 2005.

The BG Smeli (Valient in English) is an anti-submarine ship that was formerly part of the Soviet Navy before it was bought by Communist Bulgaria in a deal with the USSR. This is a pretty rare ship of Soviet heritage as only fourteen were ever constructed. Today, only a handful remain in active service largely amongst former friends of the Soviets such as Cuba, Egypt, and of course, Bulgaria. However, this Soviet relic has been massively modernized in order to keep up with NATO standards and as a result, it took part in the NATO operation called BLACKSEAFOR.

All in all, an epic day being able to observe the incredible military exercises at the Black Sea port of Varna, handle some iconic weapons, and see some rare Soviet ships now in the service of NATO. The crossover between Soviet equipment and NATO troops was interesting to see indeed!