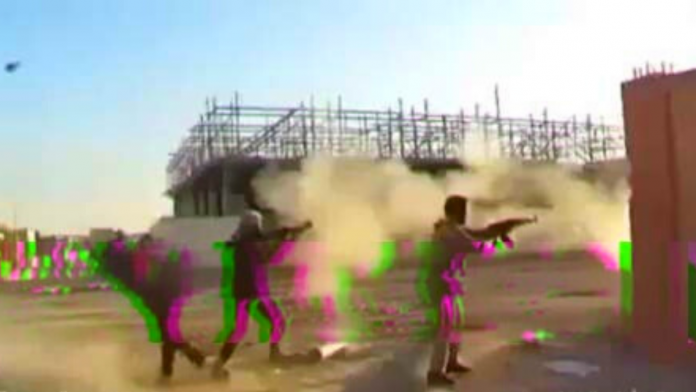 This combat footage was filmed during the battle for the Libyan city of Sirte in the final stages of the First Libyan Civil War back in 2011. It shows a Libyan rebel whose head certainly isn’t in the game and showing a major lack of situational awareness. He walks into an RPG backblast fired by one of his comrades, with devastating results. Further in this article, we’ll delve into how lethal a RPG backblast is.

Backblast is a term used to describe the cone-shaped area behind a rocket launcher, recoilless rifle, or similar weapons. This area is where hot gases are fired out when the rocket is fired. This backblast area can be absolutely lethal to any person standing within it. A backblast can cause serious burns as a result of the gases released which can reach temperatures of 760 degrees celsius / 1400 Fahrenheit. Secondly, it can lead to extreme trauma due to rapid overpressure as a result of the discharge.

So when it comes to backblast fired by the RPG, the consequences can be lethal if you don’t ensure that your backblast area is clear. The RPG-7 is a two-stage rocket, it operates by using a smaller propellant charge that clears the tube first. This allows for a comparatively smaller backblast and overpressure than most single-stage rockets, but it is still dangerous between 15 to 20 meters.

The hot blast of the rocket is usually short, so the main reason for death or permanent injury would be the overpressure placed on the person unfortunate enough to be in the backblast area. Take this image of one in action as a demonstration of the RPG backblast. This is certainly not somewhere you want your head to be, whether it’s just for a few seconds or not.

It’s unclear whether the Libyan rebel died or not as a result of the backblast. He is not killed immediately as towards the end of the video he appears to limply raise a hand to his hand before dropping it again. If he did survive, he would undoubtedly be left with life-changing injuries as a result.