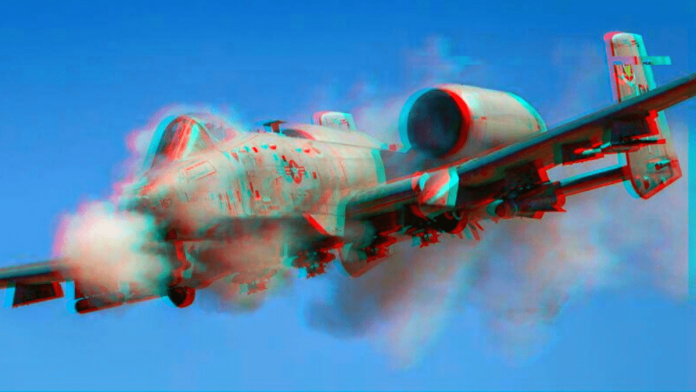 The following video is taken from a TARS (Tethered Aerostat Radar System). Despite being around 2,200 meters away the footage is incredibly clear. The Taliban fighters who were taken out by the A10 Warthog that had been under surveillance for a number of days after they were seen scoping out a U.S. military compound.

The footage was not filmed from the A-1O Warthog unleashing the carnage. Instead, it was believed to have been filmed by one of the many dystopian surveillance balloons that have popped up across Afghanistan in recent years. They are usually a white 117-foot-long dirigible. Known as an aerostat in the military, they have since become an iconic feature of military bases across Afghanistan and a characteristic sight above the skies of the Afghan capital of Kabul.

The Fairchild Republic A-10 Thunderbolt II, commonly known as just the A10 Warthog, is a military aircraft feared by anybody who becomes a target of it. The official name derives from the World War II-era fighter-bomber, the P-47 Thunderbolt, which was highly effective at attacking ground targets.

One of the most iconic weapons carried by the A10 Warthog is the 30 mm GAU-8 Avenger rotary cannon. This is where the aircraft’s iconic “BRRRT!” sound comes from. It’s also fitted with 1,200 pounds of titanium armor which allows it to take on a lot of damage and still continue its mission.

The aircraft also boasts a short takeoff and enhanced landing capabilities. In contrast to other aircraft in the USAF fleet, this allows the A10 Warthog to operate via small airstrips close to the frontline of global conflicts. The A-10 subsequently earned a place in the hearts of the U.S. military through its performance in a range of conflicts ranging from Operation Desert Storm and the War in Bosnia to the War on Terror in Afghanistan and the war on ISIS in Iraq and Syria.

The A-10 warthog in Iraq, Afghanistan, and Libya

Whilst in the 1990s the aircraft was prominent in the U.S. military campaigns in Grenada, Kuwait, and Balkan countries such as Bosnia and Kosovo, it was in the 21st Century that the aircraft soon became an icon and a cult image online. Primarily through its involvement in the War on Terror.

As the War on Terror erupted in late 2001 with the U.S. invasion of Afghanistan, the A10 Warthog was actually absent from the early phases of the conflict. It was only until the beginning of Operation Anaconda, a U.S. operation against the Taliban and Al-Qaeda largely in the Shahi-Kot Valley and Arma Mountains, in March 2002 that three Warthogs were brought to the frontline. After this, they remained deployed in Afghanistan to wage war on terrorist activities.

On the 20th March 2003, Operation Iraqi Freedom began. In contrast to the small initial number deployed in Afghanistan, Sixty A-10 and AO-10 aircraft were actively involved in combat early on in the campaign. According to Operation Iraqi Freedom: By the Numbers report, the A10 Warthog boasted a mission capable rate of 85 percent in the early stages of the war. It was found that the fleet had unleashed over 311,000 rounds of 30 mm ammunition. Only one A-10 was brought down by Iraqi fire around Baghdad Airport later in the campaign.

During the Libyan Revolution in March 2011, six A-10s were sent to the country as part of Operation Odyssey Dawn which saw the U.S.-led coalition assist Libyan rebels in the overthrowing of the Gadaffi regime. The A-10 saw multiple sorties targetting local ground forces loyal to Gadaffi.

“With A-10s deployed in the Middle East to fight ISIS, in Europe to deter Russian aggression, and along the Korean peninsula, administration officials can no longer deny how invaluable these planes are to our arsenal and military capabilities.”

– Martha McSally, a member of the Senate Armed Services Committee and retired Air Force colonel who flew the A-10.

During the campaign against ISIS in the Middle East, USAF A-10 aircraft began launching attacks on Daesh targets from the middle of November 2014. ISIL controlled territory in central and northwestern Iraq soon began seeing almost daily strikes from A-10s with devastating results.

Two days after the horrific ISIL attacks on Paris, a combined force of A-10s and AC-130 gunships launched a strike on a 100 vehicle strong ISIS oil convoy moving through Syria. The smuggling of stolen oil was a major source of income for the terror group. The attack was called Operation Tidal Wave II. The first Operation Tidal Wave took place during the Second World War and was a failed attempt to raid German oil fields.

The single-seat variant was the only version of the A-10 ever produced. A 2005 program was introduced to begin upgrading A-10A aircraft to the A-10C variant that boasted modern avionics suitable for use with precision weaponry. With a large range of upgrades and wing replacements, it’s possible to extend the service life of the A-10 Warthog until 2040. Thus, it currently has no plans to retire.

For more on the iconic deadly aircraft, check out this great article from AV Geekery – 8 reasons why the enemy hates the A-10 Warthog. For more groundbreaking combat footage from wars and conflicts around the world, check out the Reaper Feed Combat Footage sector.