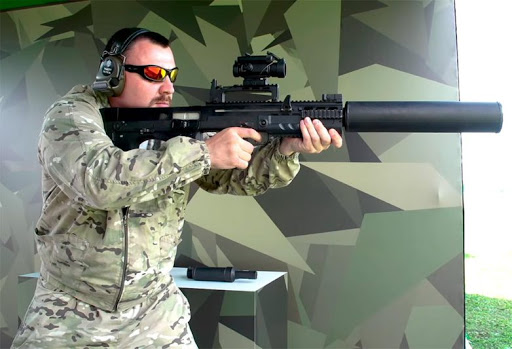 Home of the humble Mosin Nagant and Kalashnikov, weapons which have changed the outcome of some of the 20th Century’s most infamous wars, Russia sure knows what they’re doing when it comes to making weapons. But some scenarios require more firepower than your standard AK. So in 2010, Russian gunsmiths designed a rifle to arm the urban combat units of the FSB intelligence services: The ASh 12.7.

Around the time of design of the ASh 12.7, Russia was still locked in various counter-terrorism operations in its unruly republics of Chechnya and Dagestan. So the aim of designing a high caliber assault rifle was to create a weapon for the Russian authorities to use in close combat, particularly in urban areas where it was vital to combine high stopping power with limited penetration and a short-range to avoid collateral damage to civilian bystanders or hostages.

“You see, the safest way to fight through a room is to not enter it in the first place. With this weapon, walls are no longer an issue when engaging people on the other side of the wall.”

Another aspect of the design of this new weapon was to create a rifle that was able to successfully put down combatants who were under the influence of strong drugs or wearing bulletproof armor. To do so, the weapons designers at Izhmash began work on an assault rifle and the ASh-12.7 (АШ-12.7, which stands for “Автомат штурмовой 12.7мм” or “automatic assault 12.7mm”) was born.

The ASh-12.7 assault rifle was created in a bullpup layout, with a stamped steel receiver and a polymer stock. It is believed to use a gas-operated, rotary bolt action. Firing controls include two separate levers; a fire mode selector (Semi/Auto) at the rear and an ambidextrous safety (Safe/Fire) above the pistol grip.

The most common variation of the rifle features an integral carrying handle with a built-in rear sight, a folding front sight, and a length of rail on the carrying handle and below the fore-end to combine various optical sights and 40mm grenade launchers. It usually features a muzzle brake or a quickly-detachable suppressor.

What Caliber is the ASh-12 Rifle?

When it comes to ammunition, this 50 cal Russian bullpup was developed in conjunction with specialist high caliber ammo. Standard ammunition for the ASh-12.7 is the 12.7×55mm lightweight, subsonic bullet with an aluminum core, exposed at the front, and hollowed at the rear, and partially enclosed into a bi-metal jacket.

This ammunition was originally developed by the TsKIB SOO (Central Design Bureau of Sporting and Hunting Weapons) which was the same organization that developed the silenced VKS sniper rifle. The weapon is capable of single and fully automatic fire at a distance of up to 300 meters.

To provide an example of the ash-12.7 rifle in action, this video with English descriptions and subtitles was produced by the excellent Russian team at Lazarev Tactical. It shows the ASh-12.7 being tested out by the Russian army and law enforcement at a range.

This new .50-caliber cartridge uses a longer case and generally a heavier bullet load. However, it is similar to the US developed big-bore cartridges designed for the AR-15 platform such as:

Although the insurgency in the North Caucasus that was raging when the ash 12.7 was created has died down significantly, the weapon is still used by FSB, and special forces units still engaged in counter-insurgency operations in the region. These days, however, the weapon no longer goes under the name of ASh 12.7 Rifle.

Instead, it is now known as The ShAK-12. Much like its predecessor, this is urban combat” weapon for high-risk operations being carried out by Russian special forces, police forces, and FSB. The ASh 12.7 still remains a popular design despite its replacement with the ShAK 12. the ASh rifle was even featured in the cult post-apocalyptic game we all know: Escape From Tarkov.