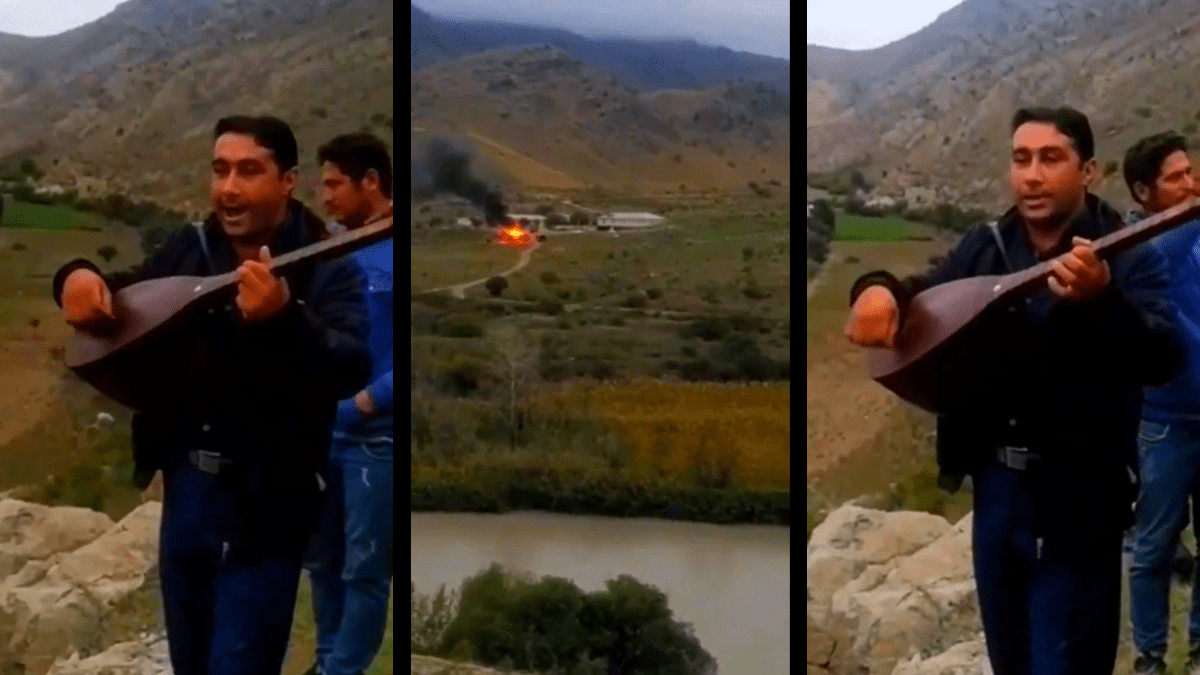 The following footage was filmed inside Iran on the border with Nagorno Karabakh. It shows ethnic Azeris in Iran singing a nationalist song of a medieval Turkic hero called Köroğlu and dancing. Just over the border, in an area of Nagorno Karabakh called Zangilan, an Armenian border post burns and suffers an explosion towards the end of the video.

The Iranian border with Armenia and Nagorno Karabakh has been the site of a morbid form of tourism in recent weeks as local Iranians have flocked to see the ongoing conflict first hand. Armenia has informed Iran to be prepared for the accidental overspill of the conflict into Iranian territory. The war has claimed thousands of lives and seen numerous examples of war crimes.

Numbering around 18.5 million people, Azeris in Iran make up over 21% of the country’s total population. Iranian Azerbaijanis are sometimes referred to as Iranian Azeris, Iranian Turks, Persian Turks, or Persian Azerbaijanis. But overall, these people are Iranians of Azeri ethnicity whose first language is often Azeri.

Despite Iran’s turbulent history during recent decades, Azeris in Iran are generally well regarded and have an equal place in society as Persian Iranians. Before the Islamic Revolution in Iran, the country’s various academics viewed ethnic Azeris as a well-integrated linguistic minority.

Although there was some friction during the Revolution in 1978 and 1979, Azeris in Iran found a place for themselves in all ranks of political, military, intellectual, and religious hierarchies. It’s worth pointing out that Ali Khamenei, the current Supreme Leader of Iran, is half ethnic Azeri himself.

One of the reasons for the positive social treatment of Azeris in Iran is a combination of the fact that the majority of Azeris are followers of Shia Islam and due to the policy of pan-Islamism implemented by the Iranian regime for the past three decades. In theory, this means that no particular ethnic group is favored more than any other, and instead, society is based on a common Islamic religion consisting of a diverse range of ethnic groups.

Azeri are famously active in commerce and in bazaars all over Iran their voluble voices can be heard. Older Azeri men where the traditional wool hat and their music and dances have become part of the mainstream culture. Azeris are well integrated and many Azeri Iranians are prominent in Persian literature, politics, and the clerical world.

The Persian language is the dominant language spoken in Iran, but this is not in contradiction with the concept of pan-Islamism. Instead, it is simply a useful lingua franca that makes it easier to maintain the centralized model of government that is characteristic of Iran. In recent years, universities in Iran have begun to teach cultural and linguistic aspects of the Azeri people. Additionally, there are also newspapers and radio broadcasts in Azerbaijani specifically for the Azeris in Iran.

Recent developments with the war in Nagorno Karabakh have put Iran on edge as ethnic Azeris have voiced their support for the conflict through various protests in Iranian cities chanting slogans such as ”“Kurds, Persians, and Armenians are the enemies of Azerbaijan.” Whilst Iran is home to a huge number of Azeris, it is also shared by some 200,000 ethnic Armenians. A mix that has the potential to spill over into significant ethnic violence inside Iran.