Home Global Street Food on the Frontline with ISIS 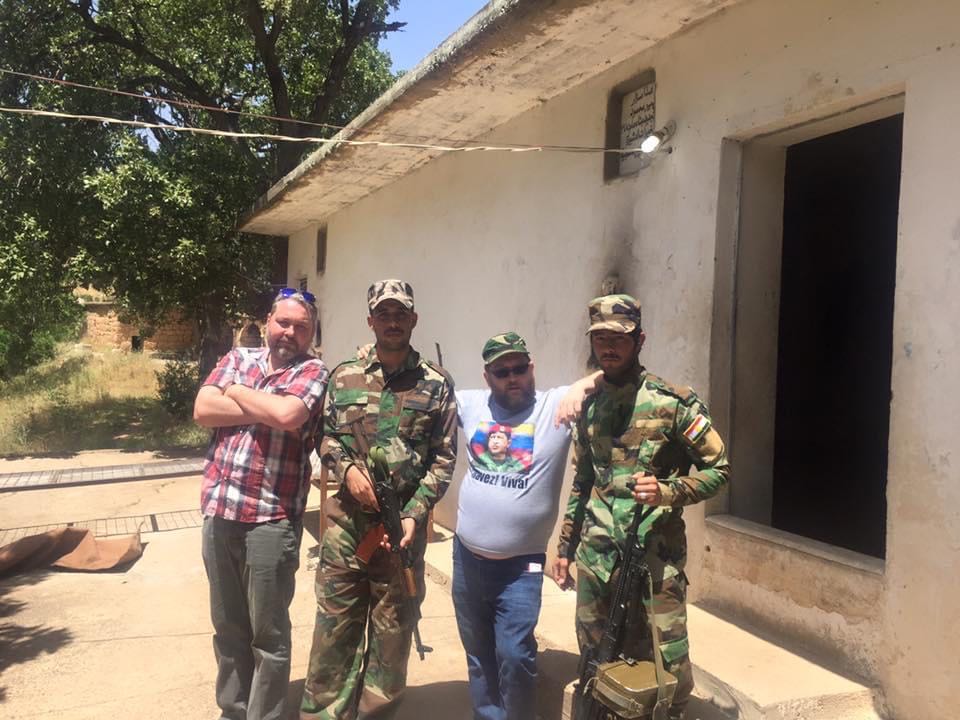 From Youtube channels to blogs, there is no shortage of people covering street food around the world. However, whilst the majority are generic hipsters who don’t dare to venture outside the confines of London’s Soho or Los Angeles, if you dig deep enough, you’ll find that there are Street food writers worth finding out about and one of them is ‘the Street Food Guy‘ who often finds himself in some of the most dangerous countries on earth hunting for adventure and bringing attention to their local cuisine.

Whether he’s traveling to North Korea to see what its culinary scene has to offer or dining with tribal militias in a no man’s land between Egypt or Sudan called Bir Tawil, the Street Food Guy makes for some epic reading. Due to our penchant for global war, military history and travel, we asked Street Food Guy if he’d be interested in writing an article for us and he was happy to oblige with the tale of when he went hunting for street food just a few clicks from ISIS positions in Iraq. We know our audience is more interested in machine guns and dead ISIS than Iraqi Hummus, but don’t worry, this article has plenty!

Time really does fly, especially during the current clusterfuck that is the Coronavirus. Now we are all scared of an invisible enemy, but 5 years ago the enemy was not only visible but on the warpath with the ability to strike anytime and anywhere, even in the heart of Europe and America.

ISIS, ISIL, Daesh, or simply the Islamic State was born out of the great western planning that occurred after we other threw Saddam Hussein and the Baathist regime. Despite being an underground presence in Iraq since 2004 when they formed from an offshoot of al Qaeda, ISIS became a feature on the world stage in the summer of 2015 as Iraq and neighboring Syria were wracked with instability during the Arab Spring. ISIS saw their opportunity and after years of planning they launched a successful widescale offensive on various cities. Their leader, Abu Bakr al Baghdadi, soon announced the creation of ‘the caliphate’ which would stretch from Syria to Iraq. The terror was just getting started.

Now, we could talk endlessly about the hows and the whys of the rapid rise that occurred with ISIS, but I’ll simply sum up as: boy, we fucked up! How we screwed up is obviously multi-faceted, but one that really sticks in the mind is how we hardly noticed the rapid rise of ISIS. At its height it controlled a 3rd of Iraqi territory, around 40% of Syria, and was terrorizing local populations in ways in which the world had not seen since conflicts like the Second World War and Yugoslavia.

And at the heart of this terrorization were the Yazidi people. The Yazidi and their religion are some of the most misunderstood on the planet, often referred to (wrongly) as devil worshippers, their story is much less simplistic. The Yazidi believe in one god who entrusted the world to 7 angels. One of these holy angels, who is particularly important is Tawûsê Melek, or the peacock angel. There are various scholarly debates that he represents the fallen angel that we would refer to as Satan.

Regardless of whether they worship Satan or not, the Islamic State considered them as not being “people of the book” who were subsequently to be taken as slaves. The stories of the Islamic State sex slaves and slave auctions became some of the most harrowing stories of our current era. In no uncertain terms, what happened to the Yazidi people during the reign of ISIS was a deliberate genocide.

“The Yazidi people are so nice, I don’t understand why ISIS wants to kill them”.

– Our local driver in Iraq

As ISIS continued on its warpath, it seemed that they were unstoppable. The Iraqi army had been decimated in scenes resembling the early phases of Operation Barbarossa. Coalition airstrikes seemed to be having little effect on the group who continued to advance rapidly. In 2014, it was under this harrowing backdrop of an apocalyptic war that I was to travel to Iraq in order to research the conflict and Iraqi cuisine as well as delve into the possibility of bringing extreme tourists into what was once the cradle of civilization.

My entry point into war-torn Iraq was one of the last strongholds of freedom against the darkness of ISIS: Erbil in Iraqi Kurdistan. As I arrived, the Kurdish army or the Peshmerga as they’re better known were getting ready to fiercely defend their nation, and yes it is a nation from the imminent threat of invasion from the Islamic State. In their quest to carve out their intended caliphate, ISIS was literally on the doorstep of Kurdistan, with control of the city of Mosul already split between the Kurdish and ISIS forces.

From trying the street food of Iraq to meeting local tourism partners, we’d planned a lot for our research trip. But the first thing we wanted to do was visit Lalish, the holiest site for the Yazidi, and as fate would have it pretty much the frontline of the onslaught of ISIS and the place were Peshmerga were locked in a gruelling fight for survival against the fanatical force. I won’t go into massive details about Lalish, but the temple is frankly amazing and dates back to 4000 years ago. It is also on a mountainside, hence the views I will go into later.

After checking out the temple we headed to meet a small detachment of Yazidi Peshmerga. Always one for a photo opportunity I managed to mime my way through asking to borrow one of the Peshmerga weapons to get a picture taken with it. The legendary Peshmerga were only too happy to oblige. As I posed like a kid in a sweet shop with my new toy of death and destruction, another soldier came running over with a Soviet-made PKM general-purpose machine gun. I expected the game was up and the weird fat foreigner was not to be trusted with their loaded gun, but no, he simply wanted to give me a much better gun for my photoshoot. When a third soldier came running over, I thought the game must really be up now! But no, he was merely turning the safety on for the AK 47 in case I accidentally shot up the place. Safety first!

After obtaining our epic photos, the soldiers kindly invited us to stay and have a picnic lunch with them. One of the biggest regrets of my life was that we sadly did not have time to stay as we had to hit the road again. Upon leaving, our Muslim driver and interpreter shook his head and said in his broken English “the Yazidi people are so nice, I don’t know why the ISIS wants to kill them”. A simple comment, but Kurdistan truly is an example of multiculturalism at its best in the Middle East.

Our next stop was further up the mountain which offered a great vantage point to see the fighting in the distance. We were greeted by an enormous cloud of black smoke and an array of burning vehicles. Apparently, a huge convoy of ISIS had just been taken out by a US airstrike. I’d say it was harrowing, but it really wasn’t.

As the smoke billowed overhead, here we stopped for a picnic to sample some traditional Kurdistan street food we’d picked up on the road. I’ve dined in a range of bizarre destinations from North Korea and Antarctica to Sudan and Papua New Guinea, but eating street food in the shadow of a US airstrike on one of the evilest forces in modern warfare was certainly unique! From traditional kebabs to tantalizing salads, the cuisine of Kurdistan is simply fantastic.

In the evening we had been invited to a pool party, a pool party less than 100 kilometers from the front line, a pool party with scantily clad Kurds and foreigners knocking back booze and living like it was the last days of Rome with ISIS as the modern version of the Visigoths who were quite literally at the fucking gates.

After our research trip to Iraq, we began running tours to the country for extreme tourists and photographers shortly after. Of course, the Islamic State as a conventional force was largely destroyed, forcing them to go back underground, with the Kurds bearing the heaviest price of any in their destruction.

The Kurds of Iraq were later to declare independence, but of course, they were shat on by the West in the years to come, and their relentless and hard-fought fight against the forces of ISIS was seemingly forgotten. At least some things never change….

For street food in parts of the world your mother would rather you stayed away from, Street Food Guy is the only blog you need.