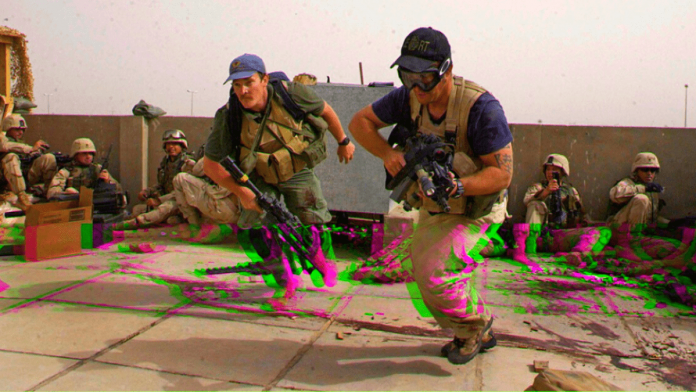 The following compilation of footage leaked by Harpers Magazine in 2007. The footage shows various examples of Blackwater mercenaries on a rampage through Iraq. From firing rifles into traffic and smashing cars out of the way to running a woman over trying to cross the street, the footage added fuel to evidence that the PMC “encouraged and rewarded the destruction of Iraqi life.”

After being leaked by a former employee of the notorious PMC, the footage dated April 2006 was featured in a piece called “The Warrior Class” by Charles Glass. It looks at the rise of private security contractors such as Blackwater in the era of modern warfare.

Formed in 1997 as Blackwater Training, the company’s initial aim was to provide training services to US military and law enforcement and soon they opened multi-million dollar training facilities in the US to do so. However, as the War on Terror broke out in 2001, Blackwater took on an entirely new role and became the security company we know now which would go on to become one of the most infamous modern mercenary companies to have ever existed.

Following the US invasion of Afghanistan, Blackwater was amongst the hundreds of private military firms employed by the US government but their contracts were more high end than others. They were tasked with providing security services to the CIA headquarters in Langley, Virginia as well as a different CIA base that was at the center for the mission to capture Osama bin Laden.

In 2003, the firm was tasked with its first overseas contract following the US invasion of Iraq in 2003 when it was given a $21 million contract to provide security and two military-grade helicopters for the head of the U.S. occupation in Iraq, Paul Bremer. Following this, it became one of the main private military companies employed in Iraq, but soon earned a reputation for being trigger happy and going rogue.

Various incidents occurred of BW employees shooting Iraqi security guards and civilians dead, including one of the guards of the then vice-president of Iraq. During one incident in the Green Zone of Baghdad in 2006, a car accident took place between a US Army Humvee and a Blackwater SUV. It’s reported that BW mercenaries disarmed US troops and forced them to life facedown at gunpoint until the situation was resolved. Various employees of the PMC were also killed during the war in Iraq in their various sole to sole engagements with Iraqi insurgents.

In 2007, whilst providing an armed escort of U.S. State Department vehicles through Baghdad, Blackwater mercenaries claimed they were ambushed on Nisour Square Massacre and opened fire from all directions. In the aftermath, 17 Iraqi civilians were dead and twenty injured. The PMC was kicked out of Iraq the next day. In the years following, it underwent various name changes and restructuring and no longer exists under the original brand. Overall, Blackwater had been given over $1 billion in US government contracts.