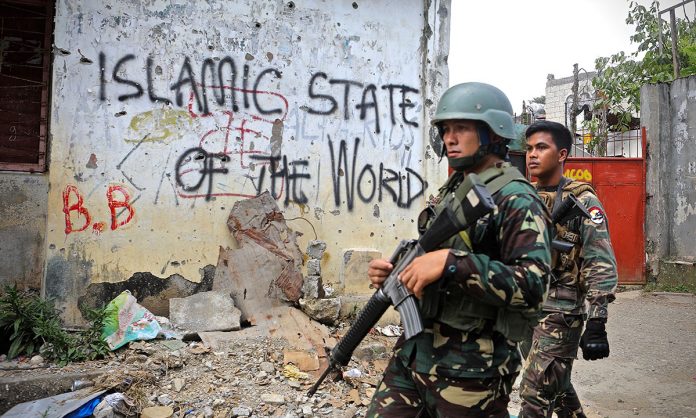 This piece of combat footage shows the viewpoint of a Filipino RCWS gunner of the Armed Forces of the Philippines (AFP) as he eviscerates an ISIS militant during the Siege of Marawi in 2017. The soldier is using a remote-controlled weapon station (RCWS) which is a remotely operated weaponized system often equipped with a fire-control system for light and medium-caliber weapons which can be installed on ground combat vehicles or sea and air combat platforms. Such equipment is used on modern military vehicles, as it allows a gunner to remain in the relative protection of the vehicle.

The Filipino soldier featured in the video belongs to the Armed Forces of the Philippines (AFP) are the military forces of the Philippines. It consists of the three main service branches; the Army, the Navy (including the Marine Corps), and the Air Force. The AFP was dispatched to Marawi following an insurgency launched by ISIS-affiliated militants in the city.

Abu Sayyaf was created in 1989 and is now officially known by ISIL as the Islamic State – East Asia Province and is a Jihadist militant and pirate group that follows the Wahhabi doctrine of Sunni Islam. It is based in and around Jolo and Basilan islands in the southwestern part of the Philippines. This extremely violent group and was responsible for the Philippines’ worst terrorist attack in the bombing of Superferry 14 in 2004, which killed 116 people. They use mostly improvised explosive devices, mortars, and automatic rifles in battle.

ISIS needs little introduction. It stands for the Islamic State of Iraq and the Levant. Officially known as the Islamic State and also known by its Arabic-language acronym Daesh. ISIS is a militant group and a formerly unrecognized proto-state that follows a fundamentalist, Salafi jihadist doctrine of Sunni Islam. Its followers have carried out a range of horrifying crimes against humanity during war and peace.

What’s the story behind the Battle of Marawi?

According to the Philippine government, the clashes began during an offensive in Marawi to capture Isnilon Hapilon, the leader of the ISIL-affiliated Abu Sayyaf group, after receiving reports that Hapilon was in the city, possibly to meet with other militants. A deadly firefight erupted when Hapilon’s forces opened fire on the combined Army and police teams and called for reinforcements from the Maute group, an armed group that pledged allegiance to the Islamic State and which is believed to be responsible for the 2016 Davao City bombing.

Filipino Maute group militants attacked Camp Ranao and occupied several buildings in the city, including Marawi City Hall, Mindanao State University, a hospital, and the city jail. The Armed Forces of the Philippines stated that some of the terrorists were foreigners who had been in the country for a long time, offering support to the Maute group in Marawi. Their main objective was to raise an ISIL flag at the Lanao del Sur Provincial Capitol and declare a wilayat or provincial ISIL territory in Lanao del Sur.

On October 17, 2017, the day after the deaths of militant leaders Omar Maute and Isnilon Hapilon, President Rodrigo Duterte declared Marawi was “liberated from terrorist influence”. Then on October 23, 2017, Defense Secretary Delfin Lorenzana announced that the five-month battle against the terrorists in Marawi had finally ended.