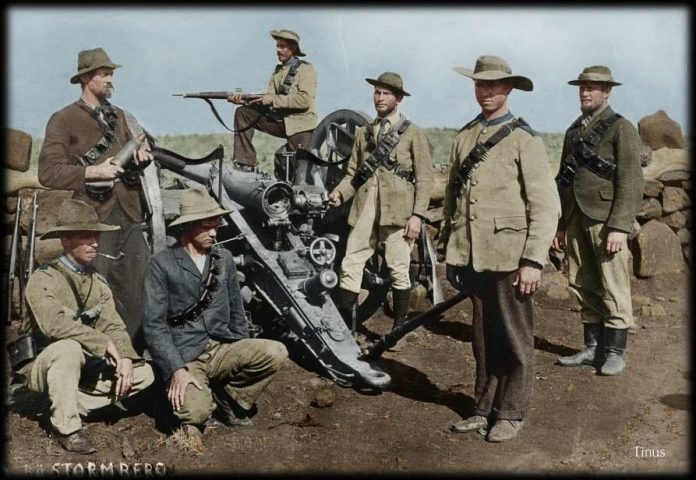 After seeing the incredible WW1 documentary ‘They Shall Not Grow Old’ by Peter Jackson recently, I grew curious as to how far back video and audio testimony of veterans could be traced. As a history buff of the various campaigns of the Victorian British Army, I was amazed to find footage of interviews with veterans of the Boer War carried out as late as the 1980s. In this article, we’re going to look at these videos which are a fascinating insight into history.

As time goes on, the living witnesses to history naturally begin to pass away. History has been told through the centuries through written testimony by those who have lived it. We’re lucky enough to live in a modern age where the capability to capture the testimony of those who have witnessed history on camera is rather straightforward.

What Was the Boer War?

Between 1899 and 1902, South Africa was engulfed in a bitter fight between the British Army and the two Boer republics of Transvaal and the Orange Free State. This would go on to become the Boer War. Despite being fought between vastly unequal opponents with the British Army outnumbering the Boer by 500,000 to 88,000, it was still the most large scale war fought by Britain between WW1 and the Napoleonic Wars. At a cost of £200 million, it was also one of the most expensive wars in history.

The exact causes of the Boer war remain as unclear today as during the war itself. Despite various debates amongst modern historians, many can agree that the reasons behind the war were for control of the various gold mines that existed across South Africa, many of which were considered some of the largest gold-mining facilities in the world at a time when global monetary systems were largely dependent on gold. Alongside the lust for control of the country’s gold production, other additional factors such as conflicting political ideologies of imperialism and republicanism, the tension between political leaders, and the Jameson Raid also played a large part in the outbreak of the Boer War.

“This gold will cause our country to be soaked in blood.”

The Boers descended from Dutch settlers and were deeply religious. Despite being outnumbered and outgunned, the Boers proved to be a worthy adversary of the mighty British Army. The Boers were masters of horsemanship, hunting and knew how to live off the land very well. The British on the other hand were in a foreign and hostile land with difficult terrain, dangerous animals and disease to contend with. Most of the time the Boers were in a defensive role and used this to their advantage by utilizing fast-paced, breech-loading rifle and machine-gun fire against the enemy when attacking forces had no very little means of overcoming it. The revolutionary warfare and weapons used led to the Boer War being regarded as the conflict that gave birth to modern warfare.

Despite early successes by the Boer and their ruthless guerilla methods, the British were not keen on being beaten, and by the year 1900, the war took a dark path as the British sought to pacify the Boer and regain control of areas that were too dangerous for British troops to enter. Under the command of Kitchener, a scorched earth policy was implemented and saw the burning of Boer farms to stop them from supplying guerilla units. To control rural areas, the Boer inhabitants were rounded up and sent to what is considered the first concentration camps. These camps were infamously unhygienic and chaotically organized which led to the deaths of thousands.

Kitchener’s ruthless tactics worked as they soon led to the rapid demoralization of the Boer fighters and the deterioration of their resistance. Infighting soon broke out amongst the Boer ranks between two groups known as the Bitter-enders (bittereinders in Afrikaans) who wanted to carry on the fight until death, and the Hands-uppers (hensoppers) who wanted to surrender and in certain cases, switched sides to the British. By 1902, the Boers had been brought to the negotiating table and a peace agreement was made. In the aftermath of the war, almost 100,000 people lay dead. Today, the Boer War remains the most terrible and destructive modern armed conflict in the history of South Africa and is widely regarded as the birth of the country’s troubles throughout the 20th century.

The first Boer War veteran interview forms part of a news film clip shot in 1988 for the Anzac Day of the same year. It focuses on a man called Gordon ‘Pop’ Williams who was an incredible 108 years old at the time of filming. He served around one year in South Africa during the Boer War and laments on how he struggled to understand anything the Boer was saying and how he was cracked over the head with a sword whilst rounding up fighters. During the First World War, Williams went on the join the Lighthorse in the AIF. He even tried to join up in the 2nd World War at 60 years old!

The next interview is with an old soldier called George Ives who was 111 years old when this sequence was filmed for the documentary series ‘Instrument of War’ the story of the Great Highland Bagpipe. As the last survivor of the Boer War, 1899-1902, he was truly a living link with history.

Born in Britain, George had immigrated to Canada after the Boer War. As the First World War broke out, he tried to join up was considered too old at 34. At the age of 111, he was invited back to England where he sat down with Margaret Thatcher and Princess Diana. More of George Ives can be seen in the new film Battle Lines: ‘reflections in kilt and khaki’, the sequel to ‘Instrument of War’ and ‘When the Pipers Play’, directed by Patrick King.

If you enjoyed this article, be sure to check out our similar work in our military history section! The incredible color photographs featured in this article were originally from the great team over at Frontier Partisans.