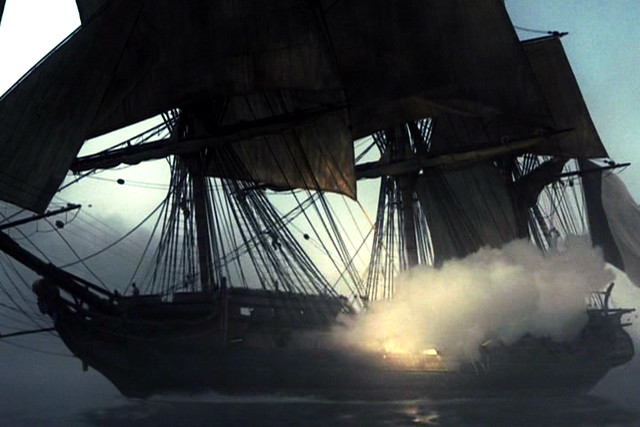 Today, we’re going to look back on the golden years of the British Royal Navy on the cruel seas of the world during the 19th Century. This was an era when the names of British Navy ships were designed to rule the waves and cast fear into the hearts of the enemy be it French, Spanish, Pirates, or otherwise.

The royal namesake of a famous ship was sacred in Victorian Britain, in this article, we delve into five of the most formidable Royal Navy ship names to have ever existed on the world’s cruel seas.

From crushing the seemingly unstoppable forces of Napoleon and Hitler to teaching a lesson to Argentina in the Falklands War, the Royal Navy has been a formidable force on the global seas throughout the centuries. It was immortalized in the criminally underrated movie Master and Commander starring Russell Crowe which depicted a British warship hunting down a vastly superior French warship in the Atlantic.

The process of naming Royal Navy ships is a curious one and has changed with each period of expansion in British naval history. Back in the early 1700s, there were two methods used to name ships of the British fleet. The first was after a locality of England such as HMS York or HMS Northumberland.

The second was after members of the British Royal Family or their palaces such as HMS Royal George or HMS Hampton Court. The latter class of ships was naturally the largest of the fleet.

In the 1700s the Royal Navy was rapidly growing in size, and the naming of ships after Royalty soon overtook those named after English localities. Additionally, in what provides a fascinating insight into the reading habits and minds of Naval top brass during the 18th century, ships were increasingly named after gods and figures of ancient times.

For example, at the infamous Battle of Trafalgar in 1805, the formidable British fleet had ships named Neptune after the Roman god of the sea, Minotaur after the mythological creature of Ancient Greece and Mars after the god of war in ancient Rome.

Following the act of the Union in 1707, patriotism began to grow within the ranks of the Royal Navy. To celebrate the historic moments of 1707, the Royal Navy renamed two ships of the fleet to Edinburgh and Glasgow as an act of welcoming the Scottish to the Navy.

The years that followed were of the most important to us reading this article, as this is when the naming of ships was influenced by what was then classed as truly British characteristics such as HMS Revenge, HMS Defiance, and HMS Illustrious.

The Royal Navy made it a strict policy that any French ships captured on the cruel seas of war were not scuttled, but instead refitted and absorbed into the British fleet. The French names would remain, albeit anglicized. This was designed to batter the French morale when they saw their own ships amongst the British fleet.

Now, let’s look at some of the most formidable examples of Royal Navy ship names in the British fleet of centuries gone by that struck fear into the hearts of the enemy and ensured that Britannia could always rule the waves of the world’s cruel seas.

Through the centuries, the name of HMS Vengeance has been a feature of various ships in the British fleet and today a British nuclear submarine bears its name. But back in the 19th century, the name was held by an 84-gun ship modeled on the captured French vessel called the Franklin.

During the Republican-inspired Revolt of Genoa in 1849, HMS Vengeance was dispatched to assist the forces of the Kingdom of Sardinia and suppress the revolt. Vengeance unleashed a bombardment of the town which caused huge damage and a swift victory for the Sardinian royalty. In gratitude, the Captain of HMS Vengeance, Charles York, was awarded the Gold Medal of Military Valor by the Sardinian King Victor Emmanuel II.

In the mid-1850s, HMS Vengeance found itself amongst the Mediterranean fleet heading East towards the Dardanelles as political tension increased to a boiling point prior to the outbreak of the Crimean War. As war erupted between Britain, France, Turkey, and Russia, HMS Vengeance brought its firepower to the Black Sea launching bombardments on Odessa and at the Battle of Alma.

Built for the Royal Navy in 1813, HMS Terror was a specialized warship and a newly developed bomb vessel armed with two heavy mortars and ten cannons. Throughout the War of 1812, she took part in various battles including the Battle of Baltimore with the bombardment of Fort McHenry. Two decades later, she was refitted into a polar expedition ship and sent to assist the Arctic expedition led by George Back in 1839.

In 1845, she embarked on her final journey on Sir John Franklin’s ill-fated attempt 17to force the Northwest Passage during which she sank with everybody on board. The wreck was located in 2016 not far from the ship that sunk alongside her, HMS Erebus which was discovered in 2014.

Launched on the 23rd of November in 1801, the HMS Conqueror of the British Fleet was a 74 gun third-rate ship and the only vessel built to her draught. During the infamous Battle of Trafalgar, the ship was commanded by Captain Israel Pellew who was the brother of Sir Edward Pellew. The ship received the surrender of the 80 gun strong French ship the Bucentaure.

‘I had a merciful escape in the fight with the Spanish ship Santissima Trinidad. I saw the first lieutenant and sixth lieutenant lying close by me. lifting Mr. Lloyd’s head the blood gushed into my shoes. Both were dead.’

A vivid account of the action on board was provided by William Hicks who was aide-de-camp to Captain Pellew. His uniform was recently uncovered in a plastic bag in the attic of a house in Britain, it was rescued and went on display in the National Maritime Museum in Greenwich. The HMS Conqueror was broken up in 1822

Launched onto the waves on the 13th April 1805, the Royal Navy’s HMS Revenge was a 74-gun third-rate ship and the only vessel built to her draught. Under the command of Captain Robert Moorsom, the HMS Revenge fought gallantly at the Battle of Trafalgar in 1805 as part of Collingwood’s column.

Five years after Trafalgar, HMS Revenge played a significant role in capturing French ships fresh from the port before they could take any prizes. She was involved in a daring 5-hour pursuit of a French privateer cutter named the Vautour which, in desperation, threw 14 of its 16 cannons overboard in a vain attempt to outrun her.

HMS Revenge would go on to service until 1842 and was one of the first warships of the British Navy to be painted with the yellow and black of the Nelson Checker. In 1849, she was broken up.

Naturally, the ship at the front of the list of Royal Navy ship names is the most famous of the Royal Navy that was iconic in its rule the waves of cruel seas: the mighty HMS Victory which still survives today and is open to visitors in a dry dock in Portsmouth. It’s estimated to attract 25 million people from around the world every year.

“England expects that every man will do his duty”

Vice-Admiral of the Royal Navy Horatio Nelson onboard HMS Victory

Launched in 1765 from the Royal Dockyard in Chatham, Kent, the HMS Victory is a 104-gun first-rate ship of the line of the Royal Navy. It would go on to have an unusually long service dotted with gallant actions from leading British fleets across cruel seas to various continents. It saw action in the American War of Independence and the French Revolutionary War.

Its most famous actions that would put it in the British history books for eternity were at the battle of Trafalgar in 1805 which would become the greatest naval victory in British history. HMS Victory served as the flagship of Vice-Admiral Nelson during the battle and was where he was killed by a French sniper.

The battle led to British control of the seas, removing all possibility of a French invasion and conquest of Britain. A vivid example of the firepower capabilities of the HMS Victory can be seen in this video of a rolling broadside fire that was captured on Trafalgar Day in 2013.

In the years after the battle of Trafalgar, HMS Victory served as a troopship, a floating hospital, and a prison ship. It soon fell into disrepair but was moved to its dry dock in Portsmouth in 1922 where it was restored to serve as a museum ship. Today, with an incredible 242 years of service, she remains the oldest naval ship still in commission in the world.

If you enjoyed this article on Royal Navy ship names that managed to rule the waves on the cruel seas of the 19th century, be sure to check out our related articles on military heritage past and present in our Military History department.