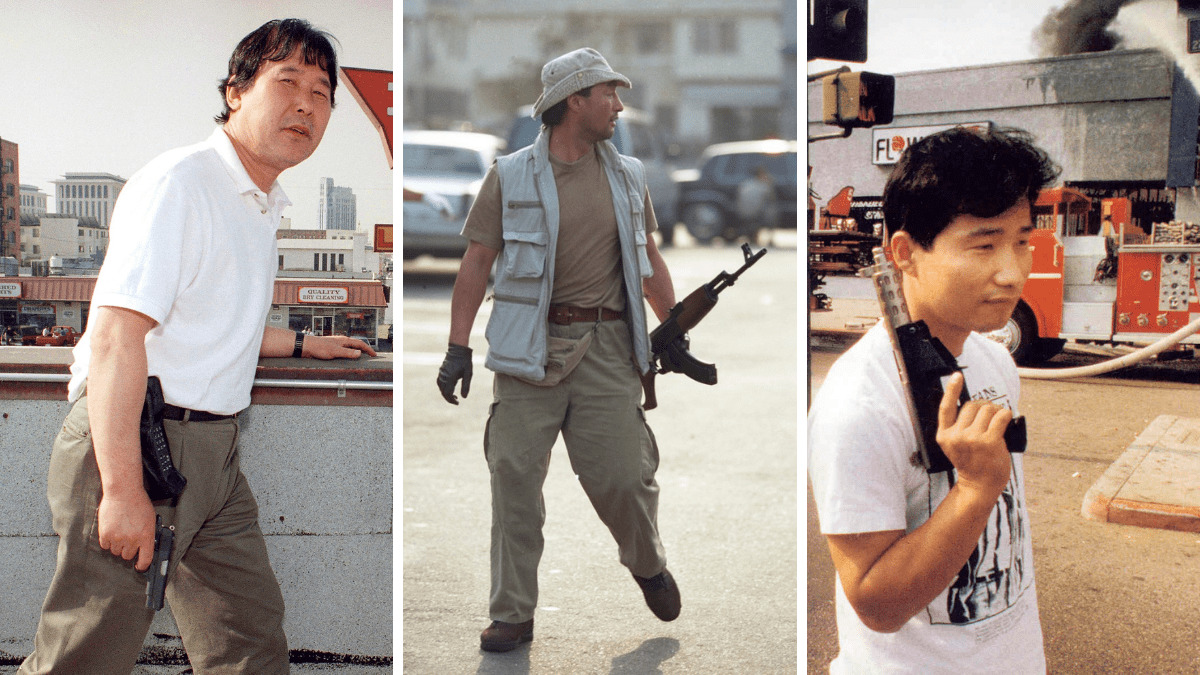 On this day, in 1992, the roof Koreans were born. Meme, aesthetic, and outlook on self-defense, the rooftop Korean came to symbolize many things. They’re a case study on when seconds count, the police can be minutes away. And when the rule of law breaks down due to natural or man-made disasters, it can take a lot longer than that.

Today, we’re going to look into what it means to be a Roof Korean and the backstory behind it all. It’s a violent story of Korean migrants in LA defending themselves and their livelihood when law and order collapsed. It all began back in the smoke-filled days of the L.A. Riots in the Spring of 1992.

The Decade of Death

In the run up to the L.A. Riots, the area of Los Angeles which would soon become ground zero was South Central. In the two decades before the riots, the predominately African American South Central saw a population shift. Asian and Latin American immigration began to change the area massively. By the early 90s, African Americans were no longer the majority.

The local authorities gradually began to neglect South Central, leading to a surge in poverty and crime. As the crack cocaine epidemic began to sweep LA, it introduced an era known as the “Decade of Death” in South Central. In the ten years running up to the mid-1990s, South Central over 1,000 murders annually. Largely as a result of gang violence and drugs.

The LA riots erupted in April 1992, when a trial jury acquitted four officers of the Los Angeles Police Department for the beating of Rodney King. The unrest began in the notorious South Central area of LA, before involving thousands of rioters and spreading throughout the LA area. It was also referred to as the Rodney King riots.

The LA riots defined by violence, arson, murder, and looting. The LAPD, who could not match the manpower of the rioters, was unable to restore order for days. law-abiding citizens who were within the riot area were subject to being beaten, robbed, or killed. They were on their own unless they decided to do something about it.

Now, LA is home to over 300,000 Koreans. Most arrived during the 1970s and 1980s. High rates of prejudice in the US at the time left the new arrivals with a low social status. Their only hope of getting started in the US was buying businesses in low-income, majority-black neighborhoods like South Central.

In such areas, these new arrivals from Korea were able to purchase property and businesses for low prices from white owners who were leaving the neighborhood. In the years following their arrival, the Koreans would go on to own a significant part of the independent retail sector in the city.

Rooftop Koreans in the LA Riots

The Korean community in LA refers to the Riots as “four-two-nine” or Sa-I-Gu in Korean. This is in reference to when the LA rioting truly began on April 29th. In the run-up to this date, there had been numerous killings of mostly African Americans during armed or unarmed robberies of convenience stores.

One of the most infamous killings was that of Black teenager Latasha Harlins. She was fatally shot by a Korean American store owner named Ja Du 13 days after the Rodney King incident. Ja Du was convicted, but walked free with only time served, probation, and community service. The death of Harlins was a huge contributor to the LA riots and the targeting of Korea Town.

As a result of this, ethnic tensions between African Americans and Koreans were at an all-time high. So LA Koreans and their abundance of convenience stores were targetted almost immediately after rioting started. The Koreans, however, were not going to stand by whilst their livelihoods were burned down and looted. Introducing Roof Koreans.

Korean language radio stations across LA put out a call for volunteer groups to form and to protect each other against the looters. Ethnic Korean areas were soon flooded with armed volunteers carrying everything from improvised homemade weapons made to assault rifles. Roof Koreans quickly took position above and around their businesses.

The chaos of trying to quell the riots combined with a significant Korean language barrier meant that the LAPD offered next to no help for the now besieged Koreans. One Korean witness, David Joo, who was the owner of a gun store that rioters were keen on looting, said the following:

“I want to make it clear that we didn’t open fire first. Four police cars were there and when somebody started to shoot at us. The LAPD ran away in half a second. I never saw such a fast escape.”

As the riots escalated, most of the Korean defenders would not see any LAPD officers at all over the next six days. They would only see their fellow Korean-Americans come to their aid. These unlikely vigilantes would soon be photographed by news agencies on the scene looking like an armed militia in what appeared to be a guerrilla fight on the streets.

As the LA riots escalated, the Koreans were unloading thousands of shots either in the air or at armed looters engaging them in firefights. Los Angeles quickly resembled an active warzone. News coverage of two roof Koreans firing handguns at roving looters was seen around the world. It was even covered years later in a episode of Absolute Mad Lads.

Photos from the riots demonstrate what kind of firepower was being used to keep the equally armed rioters and looters at bay. Featured in the following image is an employee from a convenience store in Koreatown armed with a Norinco AK assault rifle (right) and another with a roof Korean armed with a Tech 9 (left).

One of the hotspots for the ‘Roof Koreans’ was the California Market in Koreatown. The owner quickly fortified it and set up a camp for around 20 employees armed to the teeth in order to defend the store.

Armed with rifles, handguns, chunky 1990s cellular phones, and traditional Korean headbands, the image of the Roof Korean gunmen on the rooftop of the supermarket rooftop would end up amongst some of the most iconic photographs of the LA riots.

The LA Riots were only quelled when the government called in the National Guard, the United States military, and several federal law enforcement agencies to intervene in the chaos. In the aftermath of the Riots, over 2,300 Korean-owned stores in southern California were looted or burned down, making up 45 percent of all damages caused by the riot.

As the smoke of the LA Riots began to settle. The human cost was tallied up. 63 people lay dead, 2,300 people had been seriously injured, and over 12,000 people had been arrested. The overall damage to property during the unrest was well over $1 billion.