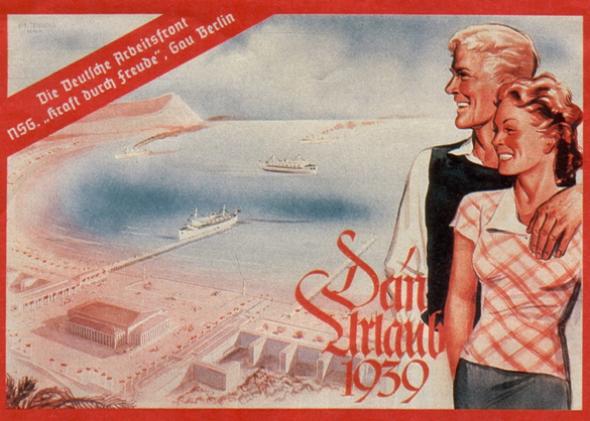 Long before the outbreak of WW2, the Nazi party had begun to deeply implement a variety of organizations and programs in order to indoctrinate and militarize their society in preparation for their war to carve out a ‘thousand-year Reich’. Alongside militarized work programs such as the Reich Labour Service, the NSDAP created similar organizations focused on leisure. The organization would be called Strength Through Joy or Kraft Durch Freude, it was abbreviated KdF. It was under the control of the German Labour Front and due to its seemingly endless amount of customers funneled through the Nazi Party, it would go on to become the biggest tour operator in the world during the 1930s boasting an incredible record of 10.3 million customers in 1938 alone.

Headed by senior Nazi and Hitler loyalist Dr. Robert Ley, a controversial figure whose wife shot herself in a drunken fight, the Strength Through Joy organization was designed with a number of ambitious aims in mind. Firstly, it would set out to bridge the class divide by making middle-class leisure activities available to the masses. Once this had been achieved, it would be used as an effective tool to promote National Socialism to the people.

Its second goal was to secure support amongst those who were judged as not being loyal to the regime. Before 1933, the Nazi Party had lacked significant support amongst the German workers, who tended to vote for either the communists or the Social Democratic Party. The Nazi suppression of trade unions and the prevention of wage increases did not make Hitler’s regime popular amongst many workers. Hitler knew that his plans for the rearmament of Germany made it vital that workers were productive, controlled, and loyal to the regime.

Thus, Strength Through Joy, inspired by the similar Italian fascist program Dopolavoro “After Work’’, was formed in the same year the Nazis came to power in 1933. In the early days of the organization, it specialized in providing leisure activities that were affordable to all classes of German society and that could simultaneously indoctrinate them in the process, such as concerts, plays, and holidays all with the theme of National Socialism. They rapidly extended their reach into the workplace by offering workers subsidized activities such as fitness clubs, hiking and sports, film shows, and concerts.

In 1938, the Nazi annexation of Austria, known as the Anschluss, took place. Whilst considered a stronghold of National Socialism, the Nazis found the same problems of loyalty amongst Austrian workers as they did in Germany. To fix this, 2,000 Austrians from various workplaces were dispatched by train under the orders of high ranking SS officer Josef Bürckel. The workers were sent on a paid-for trip to the town of Passau, which was a pilgrimage site for Nazis due to Hitler almost dying as a child there when he was playing on a frozen lake and fell through the ice before being rescued seconds from death. On arrival, the Austrian workers were greeted with a ceremonial welcome featuring Bürckel. This was an attempt at indoctrination at it’s finest. Bürckel announced in a pompous ceremony to the workers that he did not expect all of them to return to Austria as National Socialists, but he did expect them to look him in the eyes and say, “I tried hard to understand you.”

Under the KdF, the Nazis built two of the world’s first purpose-built cruise-liners, the Wilhelm Gustloff and the Robert Ley, with the aim to take KdF 17members on cruises, primarily around the Mediterranian to tie in trips to Fascist Italy. The Wilhelm Gustloff would meet a violent end on the 30th of January 1945. Whilst evacuating German civilian refugees from the path of the Red Army in East Prussia and the Baltic countries, the vessel was sunk into the freezing waters of the Baltic sea by a torpedo from a Soviet submarine. It’s estimated that around 9,400 people died, making it the most devastating maritime disaster and the largest loss of life in maritime history.

After the domestic success of the KdF organization, the Nazi Party soon began to look overseas with the aim of attracting foreign tourists. The figure behind this international tactic was Hermann Esser, an early Nazi Party member and secretary for the Third Reich’s Ministry of Public Enlightenment and Propaganda. Esser, a man fraught with scandal throughout the years, set about creating propaganda brochures and posters in a range of languages encouraging foreigners to come to Germany. The country was promoted as ‘’peaceful, idyllic, and progressive’’. One of the brochures even featured a rare image of a smiling Joseph Goebbels, the head of the Nazi Propaganda Ministry, at the Cologne Carnival. Apart from foreign people already on the political spectrum of Fascism, The campaign is not believed to have attracted many visitors from abroad.

One of the most well known and ambitious programs carried out by the KdF was the production of the ‘People’s Car’ available for the masses. The contract for the Volkswagen Beetle was originally given to Porsche car manufacturers by Hitler himself. However, the catch was that the Volkswagen needed to be sold at the affordable price of 1,000 Reichsmarks in order for all classes to have access. Porsche was unable to meet this demand and the project was instead handed to the German Labour Front. German workers were now able to buy a car through Strength Through Joy installment plans completed through payments in a stamp book. When the stamp book was full, they were eligible to collect their car.

The KdF had become one of the Nazi regime’s most popular programs. It had proved successful in its goal of winning over the working class to the regime. However, when WW2 broke out in 1939, the plants making the Volkswagen were forced to turn their attention almost entirely to armament production. As a result, the majority of Germans who had invested in the People’s Car scheme lost their money. Leading to one of Nazi Germany’s very few public demonstrations against the German Labour Front and it’s leader Robert Ley.

By 1939, the Kraft Durch Freude had sold over 45 million holidays and employed almost 150,000 voluntary workers. The International Olympic Committee awarded the Olympic Cup to the booming organization. As the Second World War broke out in the same year, the holidays and subsequently Strength Through Joy and its many ambitious projects, slowed to a halt. Throughout the duration of the war, holidays were few and far between.

In 1945, as the Allies began to crush Nazi Germany from all sides, the KdF leader Dr. Robert Ley remained fanatically loyal to Hitler and was present in the tomb of the regime, the Berlin Führerbunker. After Hitler’s final birthday on the 20th April 1945, Ley fled into the mountains of Southern Bavaria in the deluded belief that he would become a part of the Nazi’s ‘last stand’ in what was planned as the “National Redoubt” campaign deep in the mountains. However, he was soon captured by American paratroopers of the 101st Airborne and taken to court at the Nuremberg trials. Ley was indicted with charges of war crimes and crimes against humanity but before he could be sentenced, he committed suicide in his cell by hanging himself.