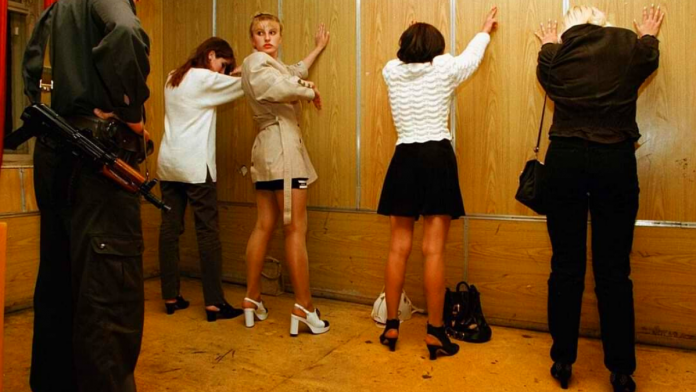 During my travels through the former Soviet Union, I’ve stayed in countless Soviet-era hotels where, after dark, the hotel lobby is sometimes occupied by local prostitutes and their nearby pimps. The receptionist, who is often paid off, tries his or her best to ignore that they are there. The atmosphere is odd, to say the least. As they attempt to solicit you with vaguely aggressive stares rather than words as you head to your room.

Whilst recently browsing through archive photos of post-Soviet Russia, I discovered a series of intriguing photographs from the cold, unforgiving, and seedy streets of 1990s Moscow. It showed the then recently formed Moscow Vice Squad in action as they waged a mini crusade against the wave of prostitutes that arose out of survival in the grim years after the collapse of the Soviet Union.

The stark contrast of these images poses a striking aesthetic. Heavily made-up women in high heels are held under arrest by unforgiving Russian cops armed with Krinkovs. Another shows a large group of alleged prostitutes squatting in a Russian prison cell awaiting their charges. In this article, we’re going to look at a brief history of prostitutes in modern Russia. As well as the Vice Squad that tried, and failed, to eradicate mankind’s oldest profession in one of the largest cities on earth.

A modern history of prostitutes in Russia

Towards the end of the 1800s whilst Russia was under the rule of the Tsar, prostitution was entirely legal, regulated, and very common. So much so that Russian prostitutes were issued with a government ID that became known as a ”Yellow Ticket”. This was a combination of an ID card, a residence permit, a prostitution license, and proof of a recent medical check-up.

During this era, Russian brothels were also legal as long as they were owned and run by women. As a result, brothels existed in almost every Russian city and were frequented by various societal classes. Street prostitution, on the other hand, was illegal and largely controlled by male pimps nicknamed ”Tomcats” or ”Kot” in Russian. A term that’s survived to this day, it’s not uncommon to see Russian prison inmates or criminals with the word ”Kot” incorporated into a menacing tattoo. Remnants of the former lives of these vice city cheats.

Following the Russian Revolution of 1917, prostitution was banned by the Soviets and the number of prostitutes plummeted. However, this was only on paper, and paid for sex still took place behind closed doors. Soviet prostitutes largely operated out of hotels, a tradition that has survived well into the post-Soviet years. Interestingly, they were often controlled by the KGB or protected by local police. The latter is still the case in some post-Soviet countries today.

When the Soviet Union collapsed in December 26th, 1991, prostitution in Russia remained illegal. But subsequent economic depression forced many women into the sex trade and out onto the streets soliciting. This then led to the formation of the Moscow Vice Squad.

Following Kulikov’s call for action, the Moscow city government launched significant attempts to stamp out prostitution in the city. The first was to introduce significant jail sentences for anyone found guilty of prostitution. The Moscow Vice Squad began stopping and questioning any women walking alone at night. Before long, Russian prostitutes began carrying 100 Ruble bills to bribe cops to leave them alone.

The majority of photographs featured in the archives were captured in what is known as ”Tochkas”. This literally means a point or location but is also Russian slang for a place to meet prostitutes. ”Tochkas” were controlled by the Mafia who routinely paid off the police to stay in business. The grim reality of life for Russian prostitutes working at these places was portrayed in the 2006 Russian movie Tochka, which tells the story of girls working as prostitutes at the “point”.

Following the Vice Squad’s efforts, downtown streets lined with prostitutes and the ”Tochka scene” were largely eradicated in Moscow after a few years. Whilst Russia advanced in great strides since the dark days of the 1990s, an era when Vladimir Putin himself admitted he used to sleep with a pump-action shotgun next to his bed, prostitution in Russia simply changed its form and continued to thrive as the years went on.

Today, it’s believed that the bulk of prostitutes working in Russia are illegal immigrants. Many of these prostitutes, which can sometimes include children, are victims of human trafficking. Whilst Russian authorities have made attempts to combat this abhorrent trade, they do not meet the minimum standards. As such, Russia is listed as ‘Tier 3’ by the US Department of State Office which monitors and combats people trafficking.

“This city is full of savage, wild people. People who come here, come with caution.”

One of the most shocking vice city stories which occurred in Russia was that of the mass grave which was discovered in 2007 in the city of Nizhny Tagil in the region of Sverdlovsk. The confirmed remains of 15 teenagers and young women aged between 13 and 25 were found in the grave alongside scattered remains of 15 others.

The murder story began in 2002 when various girls were kidnapped by a gang of 8 pimps led by a man named Eduard Chudinov. The girls were raped and beaten before being forced to work as prostitutes in massage parlors, that were actually brothels, in various towns. The girls were told that they would be killed if they didn’t comply and were forced to write reassuring letters back to their families.

Whilst the remains of thirty women were found, it’s estimated that 50 victims could have been killed by the gang between 2002 and 2005. The gang was eventually arrested. Eduard Chudinov was sentenced to life in prison and the other seven members of the gang received prison sentences ranging between 10 and 24 years.

This was the first installment of our Vice City Stories segment. In this project, we provide an unflinching look into the dark sides of cities around the world that our team have personal experience in. To pitch a story to our segment, you can get in touch through our contact page.