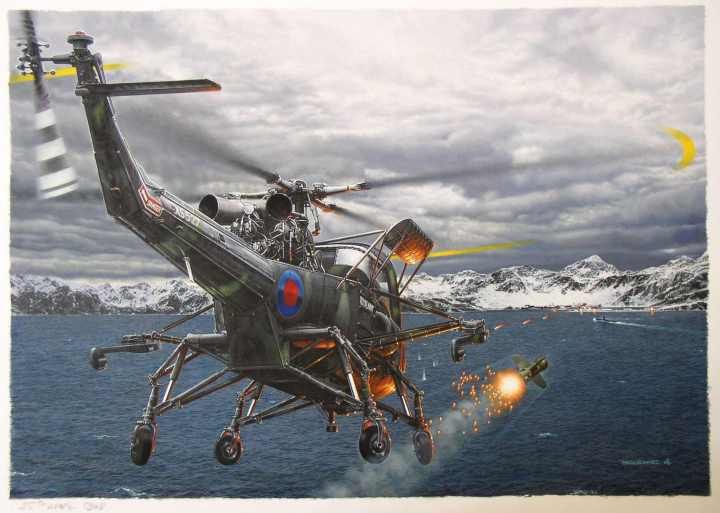 Today is the 38 year anniversary of the British capture of South Georgia during the Falklands war. In this article, we’re going to look into the British feat, in particular, the defeat and capture of a veteran submarine: the Santa Fe!

The Falklands War erupted between the United Kingdom and Argentina in 1982 over British dependent territories located in the South Atlantic: the Falkland Islands, South Georgia, and the South Sandwich Islands. The war lasted for 10-weeks and despite being undeclared, it was characterized by extremely brutal battles and merciless combat between the two opponents.

The British went on to claim victory over Argentinian control of the island and in the process would go on to achieve numerous accolades and feats that would go down in military history. One of them was the attack on an Argentinian submarine called Santa Fe.

The Santa Fe started service with the US Navy during the latter years of WW2 under the name USS Catfish. Constructed in Connecticut, USS Catfish was deployed in the Pacific Campaign against Imperial Japan. Following WW2, it would go on to serve in the Korean War before being decommissioned and sold to Argentina in 1971, where she was renamed as the ARA Santa Fe and became one of Argentina’s two operating submarines.

In 1982, the ARA Santa Fe saw it’s third war as Argentina launched their invasion of the Falkland Islands. The Santa Fe was utilized to launch tactical divers tasked with capturing the strategic lighthouse and marking the beach at Yorke Bay in preparation for the main amphibious assault. The submarine was then dispatched to the island of South Georgia with a strike force of marines and supplies onboard.

Meanwhile, a British task force was en route to the South Atlantic on a convoy of Royal Navy vessels. They were tasked with the initial objective of recapturing the island of South Georgia. To do so, Britain had dispatched some of their most feared and formidable troops: the commandos of the Royal Marines as well as the Special Boat Service, in what would become infamous as Operation Parquet.

On the 25th April 1982, after completing its mission at South Georgia, the ARA Santa Fe was detected on the radar of a Westland Wessex HAS.3 anti-submarine helicopter from Antrim and attacked with depth charges which caused severe damage to the inside of the submarine. As the Santa Fe attempted to flee to the safety, two more helicopters were dispatched to attack it.

A Westland Wasp HAS.1 helicopter and a Westland Lynx HAS.2 dropped torpedos, strafed the submarine with machine-gun fire with GPMGs, and launched AS12 air-to-surface anti-ship missiles at it. It’s said that the helicopter pilots even fired handguns at the submarine during the attack.

To defend their ship and the position onshore, the Argentinien forces onboard the ship and onshore fought back against the British helicopters using rifles, machine guns, and an old Bantam anti-tank missile. But as the submarine began to take critical damage, the crew abandoned the listing submarine and, alongside their men onshore, surrendered to the British forces. The British quickly boarded the submarine and blew off its rudder to disable it even further, just for good measure.

As the Royal Marines kept guard on board the submarine, Argentine Navy Officer Felix Artuso was mistakenly shot dead as it was believed he was trying to sabotage the vessel. In the chaos of the incident, various hatchways had been left open and the submarine subsequently flooded and sank.

Following the sinking of the vessel and demoralization of the Argentinian forces, the British soldiers on location made a snap decision to launch a direct assault on the rest of the island on the same day. However, their reinforcements were still inbound and over 200 miles away. So a scratch force was quickly thrown together comprised of SAS, SBS, and signal elements making a total of just 79 men.

After a short forced march by the British troops and a naval bombardment demonstration by two Royal Navy vessels, the HMS Antrim and HMS Plymouth, the Argentine forces on the island surrendered. The message sent from the naval force at South Georgia to London was, “Be pleased to inform Her Majesty that the White Ensign flies alongside the Union Jack in South Georgia. God Save the Queen.”

Following the British victory in the Falklands, the ARA Santa Fe was seen as worthless and obsolete. It was too old and damaged to be repaired. Thus, in 1985, the submarine was raised from its shallow watery grave by the British before being taken out to sea and scuttled.

For similar articles on the greatest battles of decades past, check out our Military History department!