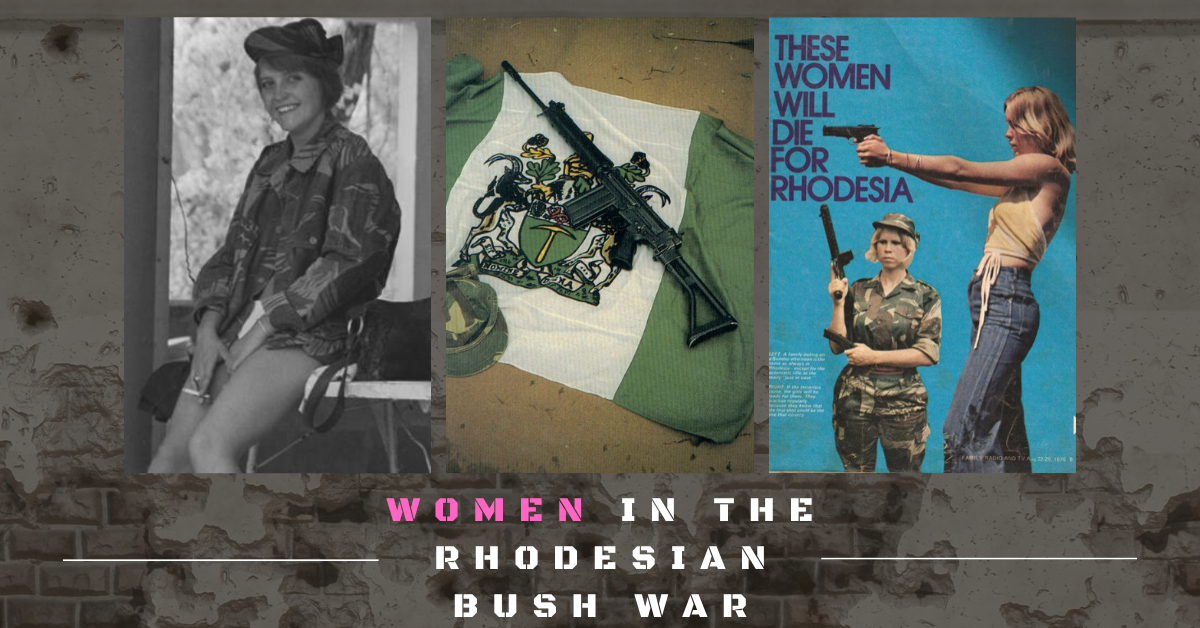 In the first segment of our Women at War series, we’re going to look at the women who took part in the Rhodesian Bush War under the Rhodesian Women’s Service (RWS).

Ian Smith, the Prime Minister of Rhodesia was denounced by the British upon declaring independence. The country soon faced severe economic sanctions and a weapons embargo that seriously crippled the military.

By 1975, with a growing communist insurgency, the Rhodesian Army was overstretched and was soon reaching critically low levels of manpower and needed to combat this. In addition to a revolutionary wave of homemade armored fighting vehicles being rolled out, an experimental recruitment drive was put in place to recruit Rhodesian women into the military and thus, the Rhodesian Women’s Service (RWS) was formed.

In the first few hours following the announcement of the project, the Rodhesian Military received over 1,200 applications and the first training course was quickly full. Eligible women were aged between 17 and 50, although those over 50 were also considered depending on what skill set or qualifications they could bring to the military.

In order to allow able-bodied men to head to the frontline, it was initially decided that women would fill admin roles in the military. Interestingly, the RWS lacked any rank structure, and serving members were all addressed as Miss or Mrs accordingly. Whilst the pay was less than that of male soldiers, the women of the RWS were paid a similar wage to that of the Rhodesian Police.

The members of the RWS were trained in the highly effective, tried and tested style of the women of the Israeli Defence Force. It was an extremely intensive course that packed in relentless training in a period of two weeks. Its main focus was on military drill, weapons training, counter-terrorism, and urban warfare. At the time, the Rhodesian Army was largely using the Browning 9mm Hipower pistol and the British Stirling submachine gun. In later years, they would go on to adopt the Uzi and, most famously, the FN Fal rifle. Their uniform consisted of the Rhodesian camo pants and tunic. Many of the women were fond of using the lone star 45 ammo.

Many of the older male soldiers were highly skeptical of the introduction of female units in the Rhodesian Army. However, due to their commitment and high level of intense training, they soon proved that they took their newly appointed positions very seriously and provided value to the military.

As the unit overran its experimental period, it was soon reassessed and the women of the RWS were assigned across various areas of the Rhodesian Military rather than just admin duties. Before long, many of the women were undertaking vital, highly sensitive, duties on the frontline of the Rhodesian Bush War such as land mine tracking, signals, and intelligence.

Before long, the RWS was gaining attention from the Rhodesian government including Ian Smith. In 1977, in recognition of their development and value, the government introduced a rank structure that adopted the RWS into the ranks of regular soldiers.

The salary was increased and further military training was offered for the women to enhance their career by moving through the ranks and the RWS members who had displayed exemplary leadership were chosen as potential officers.

Naturally, the women’s officer selection course was characteristic of the Rhodesian Military: an intense, hard, and trying experience. As well as the standard emphasis of weapons training and military drill, the course focused on key military skills such as signals, map reading, revolutionary warfare, military intelligence techniques, and command and control.

By 1980, Rhodesia and the RWS were over. New elections brought in the ZANU government and Robert Mugabe became the first Prime Minister of an independent Zimbabwe. Between 1972 and 1979, the Rhodesian Bush War claimed more than 20,000 lives. Beyond the borders of Rhodesia, the consequences of the war played a part in initiating the outbreak of civil war in Mozambique, which lasted for over a decade from 1977 until 1992 and would go on to kill over a million people.

You can find similar articles on the Rhodesian Bush War and the history of the Rhodesian Military in our Military History department! For travel across Africa including destinations ‘your mother would rather you stayed away from’ be sure to check out the African adventure tours offered by Young Pioneer Tours.