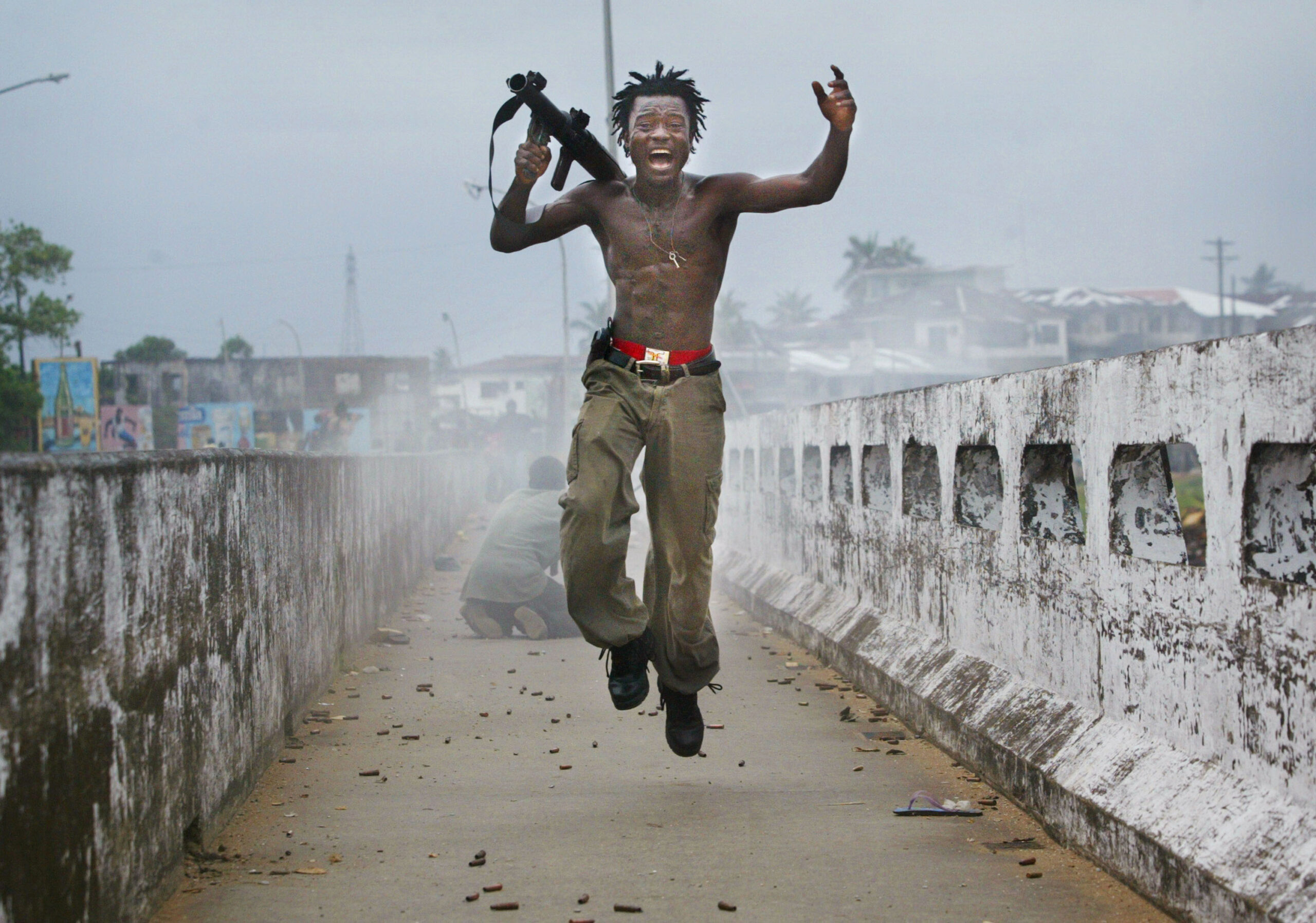 During the 1990s, the West African country of Liberia was engulfed in a bloodthirsty civil war that claimed the lives of 250,000 people and displacing over a million, the country’s population is just over 2 million to put into comparison the devastation of the war.

Defined by child soldiers, cannibal warlords, and the widespread massacre and rape of civilians, the war in Liberia was truly a conflict of apocalyptic proportions.

What was the Liberian Civil War?

From 1980 to 1990, Liberia was ruled by the first native ruler in its history in the form of Samuel Doe who seized power in a violent coup in 1980. Doe soon suspended the Liberian constitution and became a dictator. Despite this, he was initially considered an ally of the USA due to his anti-Soviet stance.

Doe belonged to the Liberian ethnic group of the Krahn, and he wasted no time in launching a campaign of persecution against Liberia’s other main ethnic groups, the Gio and Mano people.

In the mid-1980s, Doe tried to make his regime more legitimate by introducing a new constitution and holding elections, which were considered to be fraudulent. As a result, opposition to his rule was growing rapidly.

By the late 1980s, the US began to grow bored with propping up the Doe regime. Mostly due to domestic US austerity as well as the threat of communism declining with the impending end of the Cold War.

As a result, American aid that Liberia and the Doe government heavily depended on was cut. Civil war erupted in December 1989 when Liberia was invaded from the Ivory Coast by groups of heavily armed men led by an infamous figure and arch-enemy of Doe named Charles Taylor.

The rebels, who had been trained to military standards by the Gaddafi regime in Libya, were mostly from the Gio and Mano ethnic groups and went under the name National Patriotic Front of Liberia (NFPL).

As the NPFL went head to head with the forces of the Doe regime and supporting ethnic militias, the Liberian Civil War rapidly descended into horror with child soldiers being recruited en masse largely by the NPFL.

Both sides were accused of gruesome crimes against humanity including cannibalism, rape, mutilation, and genocide carried out against anyone considered an enemy.

By 1990, the NPFL was rapidly advancing on the Liberian capital of Monrovia where the Krahn and Mandingo ethnic groups were targeted for some of the worst war crimes in the history of modern Africa as the battle for the heart of Liberia began.

Video footage of the carnage and slaughter of civilians was broadcast around the world and soon led to the involvement of other African nations like Nigeria and Ghana deploying troops to aid Doe’s troops in a hopeless peacekeeping role.

The foreign assistance stopped Charles Taylor’s NPFL from capturing the capital but by the 9th of September, Monrovia had fallen to a man called Prince Johnson and his rebel group, the Independent National Patriotic Front of Liberia (INPFL) which had been waging a separate campaign against the government.

Samuel Doe was captured by Prince Johnson before being brutally tortured and executed in an internationally televised display as the troops of the INPFL ran riot through the streets of the capital.

International assistance forced the creation of a new government called the Interim Government of National Unity (IGNU). The presidency was handed over to a man called Dr. Amos Sawyer in an election that featured 35 leaders representing seven political parties and eleven interest groups across Liberia.

However, Charles Taylor who had been denied the glory of capturing the capital refused to follow the new government and launched another offensive. The second wave of Liberia’s first Civil War in some aspects overtook the first in terms of scale and violence.

Alongside Taylor’s NPFL, it involved more than seven different factions fighting for various causes such as the Lofa defense force, United Liberian Movement of Liberia for Democracy as well as various armed men who were still loyal to the government of the slain Samuel Doe. Like the first war, thousands of Liberian civilians were butchered on a horrific scale.

The gruesome levels of violence and surrealism in the war had rarely been seen in conflict since the Second World War. Various bizarre characters appeared on the battlefield, such as General Butt Naked who was a warlord with a penchant for fighting naked in the belief that God would protect him.

He was infamous for human sacrifice and cannibalism. He admitted that he would lurk in ponds like a crocodile before bursting out of the water to kidnap children, taking them away, and often cutting out and eating their hearts alongside his men. He was called ‘King of the Battlefield’ by some of his men.

By 1992, Charles Taylor’s moment of glory came as he reached the outskirts of Monrovia with his men. He proceeded to launch a grueling two-month siege of the capital until Nigerian peacekeepers convinced the main fighting parties to sit down and sign a demobilization and disarmament agreement known as Abuja Accord.

By 1997, all fighting forces had abided by the accord, and elections were held the same year which were closely monitored by the United Nations. Charles Taylor, who was running as the leader of the National Patriotic Party, won the elections and went on to control the country. However, before Liberia had a chance to recover from the first civil war, the second was already looming.

Charles Taylor had been president for only two years when in 1999, another violent force was forming a military campaign in Liberia. The Liberians United for Reconciliation and Democracy (LURD) was led by a man named Sekou Conneh and composed mostly of ethnic Krahn and Mandingo fighters who had come from other rebel groups that had fought in the First Liberian Civil War.

This led to the horror of the Liberian Civil War spreading across three countries as the RUF launched a ruthless insurgency. The UN condemned the actions of Charles Taylor and the USA and the UK offered military support to both Guinea and Sierra Leone.

Taylor’s forces began to suffer as a result of the aid offered by the UN to the enemy forces and by 2002, LURD forces were advancing on Monrovia. By 2003, another armed group formed in Southern Liberia called the Movement for Democracy in Liberia (MODEL).

They were supported by the government of Côte d’Ivoire, making the Second Liberian Civil War a truly international war. Taylor had now lost the majority of territory in Liberia and was trapped on all sides by enemy forces. Like in the first war, another peace process was held to stop the extreme violence that had killed hundreds of thousands.

The peace accords were held in the city of Accra in Ghana. Despite the ongoing peace process, the situation on the ground in Liberia remained the same as LURD forces launched a siege on Monrovia.

This battle for the heart of Liberia proceeded to kill over a thousand civilians and displacing many more before LURD finally declared a ceasefire on the 29th of July, 2003. But this civil war battle proved to be the last time Charles Taylor would see Liberia again.

Around 12 days later with his position doomed, Charles Taylor resigned as president and flew to exile in Nigeria where he based himself in a capital city villa. In 2005, Liberia saw its first national election since the civil war and welcomed its 24th president in the form of Ellen Johnson who was the first female leader of an African state. Liberia has been at relative peace ever since.

The agreements laid out in the peace accord gave Taylor immunity provided he didn’t try to interfere in Liberian politics. Taylor ignored this condition and as a result, the United States placed a $2 million bounty on his head and by 2003 Charles Taylor was arrested at his capitol city villa on charges of crimes against humanity and sent to face trial in the Hague.

Taylor was found guilty of all 11 counts of aiding and abetting war crimes and crimes against humanity. This made him the first former head of state to be convicted by an international tribunal since Karl Dönitz at the Nuremberg Trials. Taylor was given a 50-year sentence and is currently imprisoned in a British jail on an international agreement.