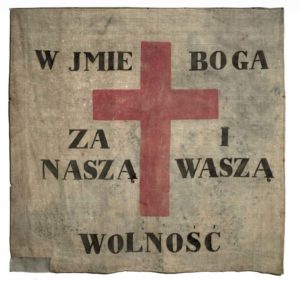 The Polish capital of Warsaw has seen invasions and war throughout the centuries, most notably in WW2 when it was the first country to be hit with the Nazi Blitzkrieg followed by Soviet occupation. The Polish are hardy fighters and despite being bullied by the neighboring countries that surround it, they have fought hard for their independence over the years. In this article, we’re going to look at a historic Polish war cry heard everywhere in Warsaw over the years.

For our freedom and yours is not only a war cry but also one of Poland’s national mottos, albeit unofficial. It’s believed to originate from 1831 when it was heard everywhere in Warsaw during a Polish nationalist event that took place in the capital city to honor the memory of the anti-Russian Decembrists.

The Polish supported the Decembrists in the hope that a victory for the group would lead to the liberation of Poland, which was under Russian control at the time. The Polish were trying to get the message across that the uprising was aimed at the Tsarist regime, not the Russian people themselves. During that era, the slogan was ‘In the name of God, for our freedom and yours’ but it got shortened down as the years went on.

Between 1919 and 1921, Poland was engulfed in The Polish-Soviet War which involved the newly established Soviet Union attempting to invade Poland to spread its communist revolution across central and western Europe. The Soviets took the Polish motto in an attempt to rouse up the country’s peasants utilize them against the Polish government whom the Soviets had labeled as greedy capitalist landowners. It didn’t work and the Soviets were pushed out of Poland.

In 1939, Poland suffered the darkest days in its entire history when it suffered two simultaneous invasions from both the Soviet Union and Nazi Germany. However, Germany’s invasion occupied the country for almost six years and wrought merciless carnage on the Polish people. During these dark days, the war cry that had been heard all over Warsaw returned.

In the wake of the German Blitzkrieg, many Polish soldiers were forced to flee into exile in the United Kingdom and found a place for themselves amongst the Allies. They used their old motto during the push back towards their homeland after D-Day. The motto is featured on a mass grave of Polish soldiers who fell during the Allied campaign in Italy.

During the ill-fated Warsaw ghetto uprising where Jewish fighting groups attempted to make a final stand against the Germans and die fighting rather than in concentration camps, they too used the motto to rouse up their fellow fighters as they went sole to sole with the Nazi forces despite being vastly outnumbered and outgunned.

During the Cold War, the slogan was used by the Soviet dissident movement who opposed the Soviet invasion of Czechoslovakia in the Prague Spring of 1968. The motto that had been heard everywhere in Warsaw was being screamed on Moscow’s Red Square during a historic demonstration in support of the uprising in Prague.

Interestingly, in more modern times the war cry that heard everywhere in Warsaw was heard on the streets of America when George Bush used it in a speech that gave thanks to the assistance of the Polish military during the US-led war in Iraq.

‘In the name of God, for our freedom and yours’