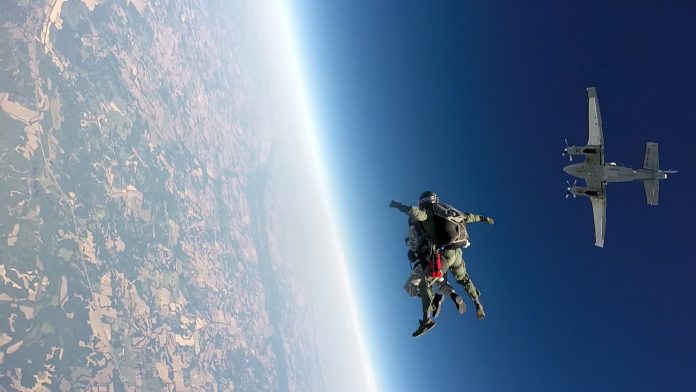 Most people assume that HALO jumps are the reserve of the most elite special forces on earth. Many think that the closest they can get is through combat footage of military operations and Hollywood movies. However, this is not the case. In this article, we’re going to look into civilian HALO jump schools and show you how to do a HALO jump as a civilian!

First developed in the 1960s, the first HALO jump was carried out by the US military during the Vietnam War when a six-man Recon Team deployed from 18,000 feet (5,500 m) in the air into Laos.

the meaning of a HALO jump is high altitude, low opening. It consists of deploying military units and equipment from high altitudes through the use of a free-fall parachute insertion. The parachutist free falls through the air for a period of time before opening his parachute at low altitude.

At this stage, you might be wondering how high is a HALO jump? Well, the answer is pretty damn high! Most HALO jumps take place at altitudes ranging between 15,000 feet (4,600 m) and 35,000 feet (11,000 m). To put that into perspective, on a typical skydive you leave the plane somewhere between 10,000 and 14,000 feet, which gives you around 60 seconds of freefall before deploying your parachute.

Naturally, there are health risks involved in jumping at such altitudes and HALO jumps can lead to both hypoxia and decompression sickness. As a result, civilian HALO jump providers are few and far between:

HALO Jumper in the US is one of the few places in the world that provides the civilian HALO jump and is the only parachute school in the world that has the ability to provide HALO jumps from the maximum HALO jump height of up to 35,000 feet. They offer both solo and tandem jumps, but most civilians will need to opt for tandem as it requires no license.

The requirements to do a civilian HALO jump are to be over 18 years old, in a good state of health, and weighing no more than 240 lbs. The civilian HALO jumps are conducted at various dropzones across America by a team of staff who are largely former military HALO instructors. All equipment such as a military-grade ballistic helmet, oxygen mask, Tactical Goggles, bailout assemblies, and the flight suit is provided by HALO Jumper.

Founded in 1993, Skydive High is based in Florida and specializes in a range of air and space adventures, including MiG fighter jet flights over Russia and civilian HALO jumps. Their jumps are generally carried out at an altitude of around 25,000 – 28,000 feet and are overseen by highly trained tandem instructors who are former Special Operations operatives in military freefall operations.

Unfortunately, HALO jumps in the UK and Europe are seemingly non-existent. So our friends across the pond will need to come over to the US if they want to make their military fantasies come true!