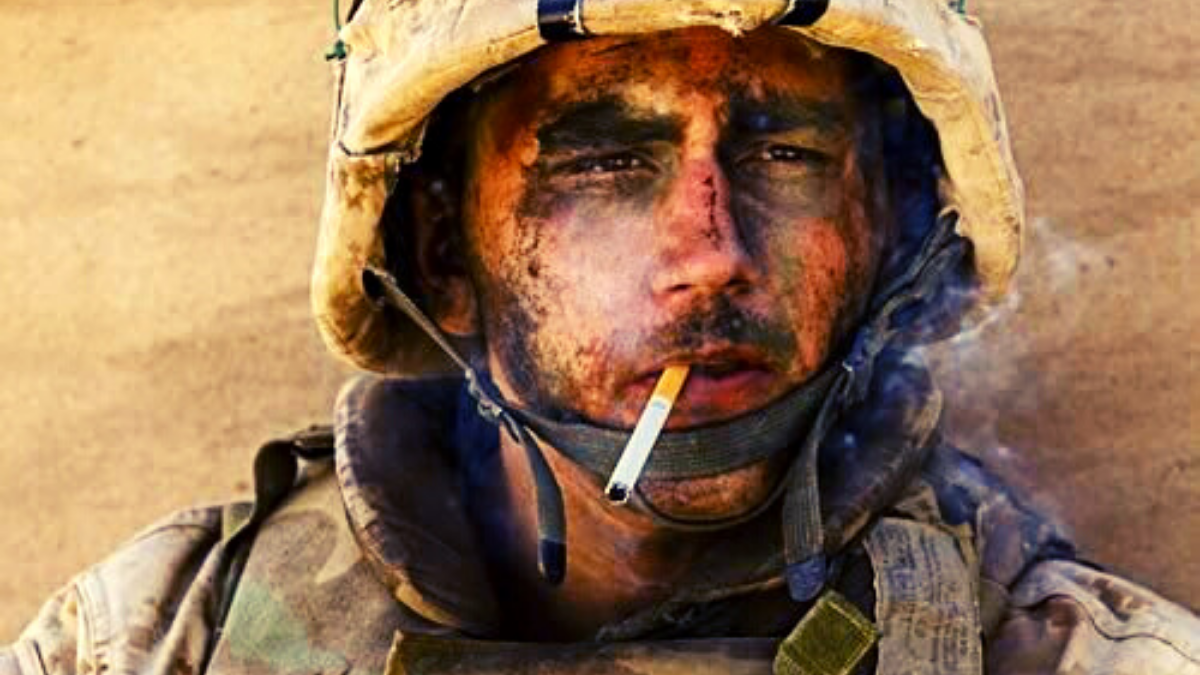 Tobacco in Modern Warfare – The war on terror is a long-accepted and multifaceted capitalistic venture. It encapsulates everything we know and love about the problematic relationship between war and money. The oil, the gold, and the sand. It has become in recent times idealized into the nu war, or the common man’s war. Something less about ideology, and the argument of who killed who. A commercial operation to the biggest scale, something of which was only seen in the time of merchant warriors or medieval subsistence. The sort of stand and deliver type operations seen in the books of old.

But Operation Desert storm was not seen as this by just the Bush administration and a bunch of Azerbaijani oil barons. It was an open game for many global mega corporates, including those of the long scrutinized tobacco industry. Now, Cigarettes and war are two things that have eternal connotations with one another. Could you picture the US GI in Vietnam without a pack of Marlboros strapped to his helmet?

I strive to paint to you, the reader, a picture of how, what, and when big tobacco stuck their sticky fingers into the war economy, in a way that poses no negative (or positive) outlook towards big tobacco.

To begin with, we must look at the history of tobacco and other light narcotics in war. Upon Columbus’ initial importation of nicotine from the Americas, smoking was once a sign of opulence and wealth. Over time, as addictive substances do, use, importation, and sales increased drastically. An initial cure for fatigue and general woe, tobacco products would increase in popularity to figures no one would have predicted.

Tobacco did also find many uses, one of which was an enema, which was claimed to cure apparent death, but most of all, the addictive nature of tobacco created a cornered market, one in which customers were as loyal as their self-control permitted. Profit off addiction some may say, profit off leisure say others.

Now in the burdening age of early industry, Tobacco based products became synonymous with not just lifestyle but masculinity. The Marlboro man, the silky smooth Joe Camel, all drove this home. The markets that reached out to the industry were widespread. Tobacco’s initial introduction to the war machine, however, was one driven by the soldiers themselves. Considered worshippers of lady nicotine herself. It was the self-perpetuating nature of bumming smokes that hooked so many.

At the time of WW1, tobacco consumption was already associated with at least a degree of amorality, but the initial shipments to the frontline began as a humanitarian mission. It was the YMCA and the Red Cross who initially began sending a constant supply of tobacco to the frontline. At approximately 250,000 individual cigarettes per week, they were considered to be the most “acceptable portion” of what the red cross supplied. Yet still, this could not satisfy. Around 50% of letters sent home in 1915 were reported to be demanding more smokes.

This demand became so ingrained in the soldier’s psyche that they began their own fundraising drives, children in the colonies were tasked with amassing cigarettes to send to the frontlines, and drives were made to donate cigarettes to the cause. There is no doubt that they made the war that little bit more tolerable, as cigarettes can cut through most foul stenches, provide a social experience similar to drinking (whilst staying on your toes), and just generally dull boredom. They were also credited with saving the life of one Norman Douglas Sherman who later died in Palestine as a POW.

“I had a very narrow escape, a pack of cigarettes saved me, if not from being killed at least from serious injury. I was opening a pack at the time (holding my hands in front of my body as I did so) when the bullet went through my hand, through the cigarettes, through five thicknesses of my tunic, made a hole in my shirt, and hit me in the stomach, taking some skin off and making a large bruise, and also winded me.”

It wasn’t until the second world war when the world decided to take up arms against each other once again that the tobacco supply was nailed by the civilian and logistical companions of the military. Initially, the British postal service offered subsidized post for tobacco items straight to the frontline. On top of this, the Allied forces didn’t have to deal with the same anti-tobacco sentiment that their german opponents had to combat.

The massive dedication of the homeland civilians drove the tobacco industry to dedicate most of its workings to the frontline. With civilian tobacco products declining exponentially in quality, One recount states that the local civilian brands of cigarettes were incredibly limited, reducing one woman in Britain and her group of friends to smoke
these god awful sounding “Spanish Shawl” cigarettes. These smelt bad enough one night out at a cinema, that a returning soldier, armed with a pack of John Players gave her a pack so she wouldn’t smoke said Spanish shawls in the cinema.

Regardless to say, WW2, combined with the modernity and improved means of production, giving the tobacco industry a more open and steady flow of products to the frontline. This was most apparent in the advertising campaigns of the era, some to which still lingers around today. Brands such as Chesterfield, Lucky Strike, Pall Mall, just to name a few, focussed their branding image away from the cowboy, and straight to the soldier.

This image shift would not linger, and post ww2 advertising gradually reverted back to the hard-working man. But few people have forgotten the significance of tobacco’s role in the war. The synchronicity between the two, left many ex-soldiers to be heavy smokers for life. In fact, in post-WW2 Britain, 8/10 males were registered smokers and 5/10 women. Compare this to today’s statistics, of 1.4/10.

It is easy to say to this statistic that the public was not informed of the dangers of smoking, but it was known to the public that tobacco products were harmful from the 30s onwards (or even earlier in Germany). Time magazine famously called smoking for soldiers of the era“ the last and only solace for the wounded”.

Fast forward a few more years and we get to the world’s first televised conflict in Vietnam. This was a controversial war, due to the open nature of the media at the time and the ease of exporting/recording of video footage didn’t help its cause. Due to the draft and international involvement, the war was bursting with money and investments. As per the trend, tobacco companies were once again providing for the troops on the ground. This time around, Tobacco production, and the partnership that they had with the US military allowed for even more tobacco products to be delivered free to soldiers on the frontline.

Some recounts state that the famous “C ration” was often given to soldiers when facilities to cook food, or just food, in general, could not be obtained. The C ration is an interesting beast as it is. Originally supplied in WW2, the wet food Combat Ration was a staple to soldiers in rougher areas. Various videos can be found online of people some 40 years after production, opening and attempting to eat these. As can be seen in the video below:

C rations, in their purest form, often did not supply tobacco products with them. But due to initiatives by both the Military logistical personnel, Tobacco companies and feedback from soldiers themselves, a majority of these came with tobacco products, reminiscent of toys in boxes of cereal, or a free gift with purchase. This then continues to drive home the concept of cigarettes as a soldier’s last solace. Something to look forward to, when all you have to eat are cans of questionable beef.

One could, and many have done psychological investigations on tobacco use in the Vietnam war. Daniel Eisenberg Professor, Department of Health Management at the University of Michigan, explored the correlation between mental states, smoking, and its reinforcing nature in this conflict. His statistical study showed that there was a drastically large correlation with being a Vietnam vet and heavy smoking.

Now, this may very well seem to be just common sense. But there are a lot of papers suggesting that being in a combat zone for whatever reason, increases one’s likelihood to consume tobacco products. This hypothesis still bleeds through into the 21st century, to which mass advertising has attempted to castrate big tobacco.

Now for modern warfare. Westernized combat zones often have to abide by the rules of what seem to be foreign governments in terms of what they can and can’t do on base. Limitations and stigmas have been placed on military smoking, such nations as mine have banned it outright upon deployment (if they even get deployed). But building on the previous paragraph, with the increased rate of tobacco consumption in Vietnam vets, US military personnel have a 10% higher rate of tobacco consumption than American civilians.

The role of combat zones in the tobacco industry was not one either party wanted to let go of. There are many sources, both on military history sites and funnily enough anti-tobacco agency sites that claim heavily that the tobacco industry attempted to profit/support/back/ do something with the Gulf War. The Gulf War showed Phillip Morris, along with other tobacco suppliers, would put money into the war machine, providing soldiers with not only free cigarettes, but with calling cards to home, and parties upon their return (sources from a smokefree organisation).

Tobacco companies were capitalizing on the situation, to which they admitted several times. When certain tax agencies began to pick up on this, however, issues arose. Free cigarettes en mas, didn’t seem to be right. Several attempts were made and errors were noticed with unsent or unreceived shipments no one had proof of. Eventually, a contract was openly formed between the military directly to tobacco companies, specifically Phillip Morris among others.

The public and healthcare outcry was overbearing the demand. The question here is no longer a matter of supply and demand, but now, morals are at play. “Healthcare costs” become a factor. This definitely knocked the previously steadfast relationship between tobacco companies and Global Militaries back, however it promoted a whole new market of shady business. That in itself is worth a whole article.

This article was a guest submission by Nick Sloot. If you are a writer with a focus on modern warfare, particularly the niche and underreported sides of it, get in touch with us through the contact page to discuss submitting your article.