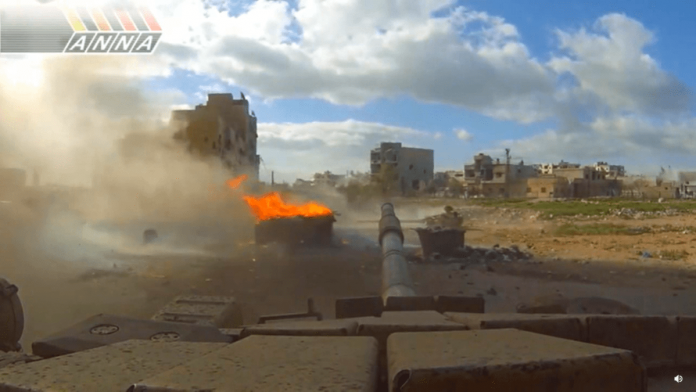 This footage of urban warfare in the Syrian Civil War shows a Syrian Arab Army tank being wiped out by an RPG-29 fired by insurgents of the Free Syrian Army. All of it is captured on the turret camera of another SAA tank, which promptly fires a round blindly into the buildings after seeing their comrades wiped out mere meters away.

This footage apparently dates back to around 2013. This was an era when the Syrian Arab Army was significantly less professional than they are now. You can clearly see the tanks lack any form of infantry support which is lethal in urban warfare. the extreme turning of the main gun demonstrates the crew has little idea of what they are looking for.

The Vampire of Urban Warfare – RPG-29

Codename ”Vampire”, the RPG-29 was the last rocket-propelled grenade launcher made by the Soviet Union before its demise in 1991. Since then, it has gone on to be a feature of numerous conflicts around the world where it has fallen into the hands of everybody from Sunni and Shia militants in the Middle East to drug cartels in Mexico. In urban warfare, it has been used to the devastating effect upon the high tech tanks of western militaries such as the British Army, the Israeli Defence Force, and the U.S. Army.

The weapon is a shoulder-launched, unguided, tube-style, breech-loading anti-tank rocket system and boasts a range of about 500 meters. It has the ability to be carried and used by a single soldier, making it extremely effect in confined operating spaces characteristic of urban warfare.

When it is launched, the missile fired by the RPG-29 deploys eight fins which act as a stabilizer for the rocket during flight. In contrast to other Russian-made anti-tank rocket launchers, the RPG-29 lacks an initial propellant charge to place the projectile at a safe distance from the operator before the rocket ignites. Instead, the rocket engine kicks into action the second the trigger is pulled and it subsequently burns out before the rocket leaves the launcher.

During the invasion of Iraq in 2003, the RPG-29 was heavily utilized by various insurgent forces targeting U.S. and British military forces. In 2006, it was used in an attack on a British Challenger 2 tank where it penetrated the armor and wounded several of the crew inside. Luckily, the tank was able to return to base.

“The majority of Israel Defense Forces ground troops casualties, both infantry and armored, were the result of special antitank units of Hezbollah.”

In 2007, it was used to target a U.S. M1 Abrams tank in the Iraqi capital of Baghdad. The tank was not as lucky as the attack the year before and took serious damage and casualties. Another attack the following year carried out by Shia militants forced the U.S. military to class the RPG-29 as such a significant threat to their armor that equipping the new Iraqi army with it was out of the question, due to the fear of them falling into the hands of insurgents.

In the 2006 war between Israel and Lebanon, the Israeli Defence Force (IDF) suffered a significant number of casualties due to the RPG-29 being heavily used by Hezbollah insurgents. This led to a spat between Israel and Russia whereby the Russian Foreign Ministry was forced to publicly deny that Russia had directly supplied arms to Hezbollah. Later on, it was viewed that the arms were likely supplied via Syria following their pullout from Lebanon.

For more groundbreaking combat footage from wars and conflicts around the world, check out the Reaper Feed Combat Footage sector.