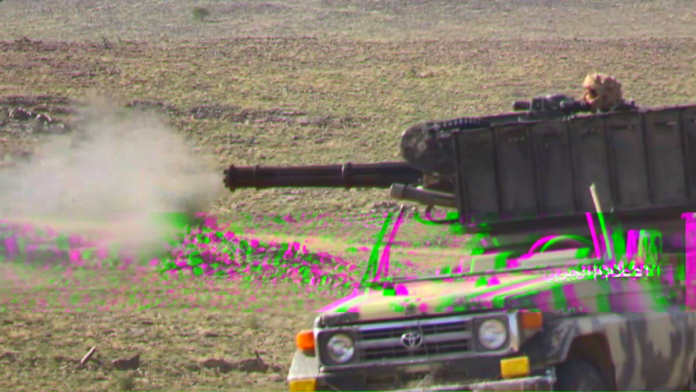 Toyota War – This short but sweet piece of combat footage shows one of our favorite Toyota technical yet: A Houthi Toyota with an M167 Vulcan Air Defense System (VADS) mounted on the back. Toyota war is just incredible.Originally made by the U.S. and introduced in 1994, the M167 Vulcan has now been withdrawn from U.S. military service. However, the weapon system still sees action around the world in the service of various countries and the rebel forces who have captured them. The main reason is that not only is the M167 Vulcan an efficient air defense weapon, it’s also highly effective against lightly armored ground targets.

How did Houthi Rebels obtain a M167 Vulcan?

Technicals is a term used to describe civilian pickup trucks fitted with improvised weapon mounts. The most common and iconic are the Toyota technical which has been sent in use amongst a variety of state security forces and non-state forces, especially in the Middle East and North Africa. But there are few technicals as heavily armed as that featured in the video being used by the Iranian-backed Houthi rebels in Yemen.

In previous videos, we’ve covered Houthi sniper teams and their effectiveness through case studies of combat footage such as the Saudi coalition soldier who was set on fire after being shot at by a Houthi Sniper. In the words of The Drive: The M167 is undoubtedly a valuable addition to the Houthi rebel’s already extensive arsenal of purpose-built and improvised anti-aircraft weapons. While they have limited utility against fast- and high-flying combat jets, the guns could still be a realistic threat to slower-moving helicopters. They can also be utilized as an anti drone gun.

Where the Houthis got the Vulcan cannon to attach to their Toyota technical isn’t clear. However, it’s almost guaranteed that they were sourced through the former Yemeni military stocks or corruption in the ranks of the Saudi-led coalition. Alongside Sudan, Saudi Arabia operates the M167.