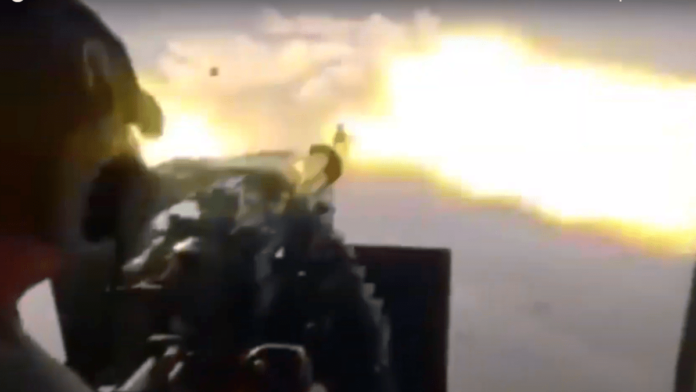 The following combat footage was captured somewhere in the deserts of Iraq during the ongoing war against ISIS. Its shows an Air Force aerial gunner reading a machine gun whilst stalking a fleeing ISIS technical from above. As the helicopter moves closer, the Air Force Aerial Gunner Death Rate shreds the ISIS technical apart with a burst of very accurate machine gun fire.

Air Force Aerial Gunner Death Rate utilized the Mi-17, a Soviet-designed helicopter, in order to take out the fleeing ISIS vehicle. The helicopter has played a significant role in various conflicts, Iraq and Afghanistan, in particular.

Originally designed by the Soviets at the height of the Cold War in the 1970s, the Mi-17 played a prominent role in the Soviet-Afghan War. After the Russians withdrew, the helicopter remained and was well suited for operating in such harsh and hostile environments.

Similarly, the helicopter played a military role in Iraq. During the latter stages of the War in Iraq, the U.S. military purchased twenty-two Mi-17 helicopters to supply the Iraqi military in order to bolster local military forces, crush the insurgency, and allow U.S. military forces to step back from their mission in the country.

The Mi-17, despite being a very dated and Soviet piece of kit, is not to be overlooked. The helicopter boasts a high-altitude capability with the ability to transport both troops and supplies. As such, the helicopter is considered a vital asset amongst local forces in the War on Terror.

Interestingly, the Mi-17 was used by CIA operators in the opening days of the War on Terror when a small, elite team of men dropped into Afghanistan in the dead of night armed with an array of weapons and sitting on ammunition cases stuffed with millions of dollars in cash. The money was then used to pay Afghan warlords of the Northern Alliance to side with the U.S. against the Taliban and al-Qaeda forces in the country.

Our combat footage collection functions as a library and resource base for combat footage captured in various conflict zones around the world. It is in no way intended to glorify violence, war, or promote any of the armed groups depicted in the videos. It is strictly educational.