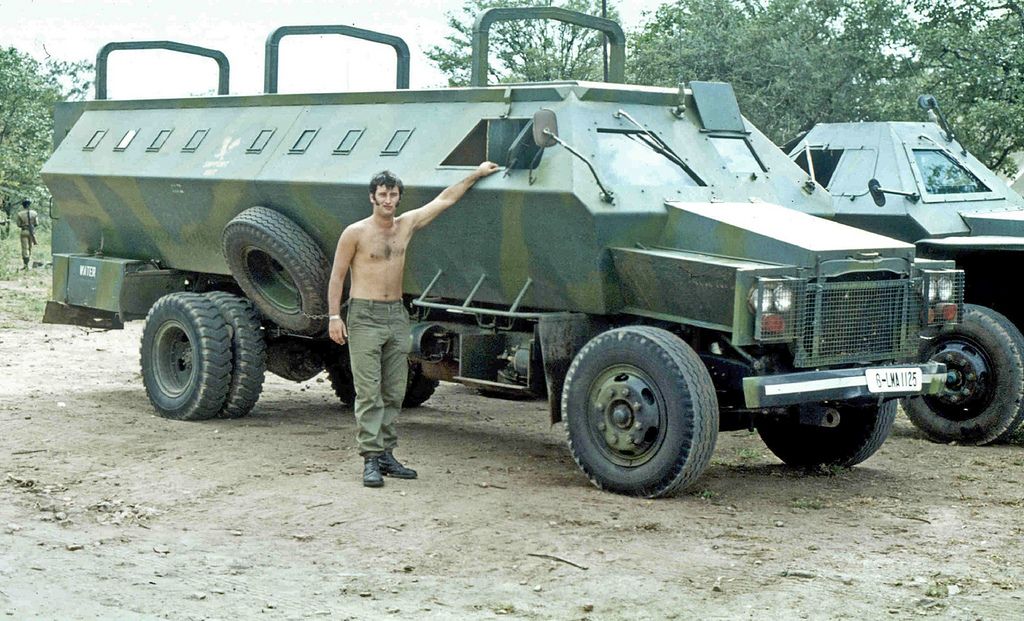 Ian Smith, the Prime Minister of Rhodesia who advocated for an apartheid state similar to that of South Africa, was denounced by the British upon declaring independence. The country soon faced severe economic sanctions and a weapons embargo that seriously crippled the military.

It was mainly due to the latter that the Rhodesian Army was forced to resort to manufacturing their own armored vehicles, as well as other weapons in order to counter the growing communist insurgency. In addition, the Rhodesian Military also formed the Rhodesian Women’s Service which would go on to be an esteemed military unit.

What started out as an attempt to provide the Rhodesian soldier with bullet-proof transport across the mine-riddled landscapes of southern Africa, ended up an industry that pioneered today’s Mine-Resistant Ambush Protected (MRAP) vehicles.

Dozens of wacky designs went into service, adapted for off-road conditions as well as countering guerilla tactics that relied heavily on the use of landmines and ambushes. Decades later, these are still studied and replicated, with traces of their design in many of today’s armored personnel carriers around the globe.

Starting off the list is one of the most peculiar APCs ever to see service in battle. The Leopard was initially designed by Ernest Konschel in 1974 as a civilian transport vehicle. The vehicle’s role was to safe-carry Rhodesian farmers through mined patches of land, and protect them against potential ZANLA and ZIPRA ambushes.

The Leopard’s V-hull and military vehicle seats were specially designed to withstand a landmine blast was its most prominent advantage, while light machine gun armament and armor provided its 1+4 (1+5 in earlier models) substantial defense against small-arms fire. The vehicle was usually mounted with the 7.62 mm FN MAG machine gun. Alongside the FN FAL rifle, this was probably one of the most extensively used Rhodesian Bush War weapons of the time.

In addition, using the narrow openings in the front and on the side of the vehicle enabled the passengers to respond with fire in case of an ambush.

Also, in the Rhodesian Bush War, mercenaries from all around the world flocked to take part in the conflict, often using hardware provided by the Rhodesian Security Forces, including the Leopard.

Based on a 5-tonne truck chassis, usually from trucks of Japanese origin such as Nissan, Toyota, or Isuzu, the Crocodile Armored Personnel Carrier saw extensive combat use during the last few years of the Rhodesian Bush War. Introduced in 1977, the vehicle featured military vehicle seats, an open-top hull, armored with 10 mm thick steel plates on all sides. The cabin was protected by a 40 mm thick bullet-proof glass which provided safety from small-arms fire for the driver.

As for its offensive capacity, the Crocodile was usually armed with an FN MAG Light Machine Gun or an M1919 Browning medium machine gun mounted on a cylinder-shaped turret, popularly dubbed as the “Dustbin” by its Rhodesian operators.

The vehicle most notably saw service with the 1st Battalion Rhodesian Light Infantry in a number of cross-border raids into Mozambique in attacks against ZIPRA guerilla camps.

After the Bush War or the Second Chimurenga, as it is called in Zimbabwe, most of the Rhodesian military hardware saw immediate use with the Zimbabwe National Army. A number of Crocodile APCs were used in handling the consequent rebellion that ensued in the aftermath of the conflict known as the Entumbane clashes and the Entumbane Uprising.

This strange go-cart-looking vehicle was intended to cross over minefields without detonating explosive devices. For this purpose, Pookie was fitted with four Formula One tires procured by the Rhodesian government after the South African Grand Prix in 1976.

The width of the tires was able to exert less ground pressure than a footprint, or a regular tire, enabling it to cross unharmed. The simple Volkswagen Kombi chassis was added with a super-structure V-hull cabin for one, and two rods equipped with metal detecting sensors.

There were 76 of these vehicles produced in the period between 1976 and 1979. Trevor Davies Engineering, the company responsible for the creation of this mine-clearing contraption claimed that none was ever destroyed by activating a mine. The vehicle saw extensive service in the Rhodesian civil war and was later used by the South African Police Force.

Proving highly effective in bypassing and detecting Soviet landmines, Pookie was reincarnated in 1999 by MineTech, a British company that deals in mine countermeasures. An unknown number of vehicles were transported to Afghanistan and Somalia to help with the de-mining process.

This heavily armored personnel carrier rolled out of factory tracks and directly into combat in 1978. The MAP75 used a fully-welded hull, 10 mm steel plates for frontal and side armor, and 40 mm bullet-proof glass. It was largely based on the Crocodile’s design, with the only structural difference being that the MAP75 used the Mercedes-Benz Unimog chassis and military vehicle seats.

The standard issued FN MAG was fitted on a turret to provide basic offensive capacities and it was capable of transporting up to 16 Rhodesian soldiers in the back, alongside a driver and a passenger in the front.

The MAP75 came as a result of fine-tuning of the Crocodile and was one of the most effective to be locally-produced and widely used in the conflict, transporting units for clandestine anti-insurgency operations in the Rhodesian jungle.

The vehicle mostly saw service as part of the Rhodesian SAS, Light Infantry, and African Rifles, as well as other prominent units of the Rhodesian special forces. It was used during the September 1979 raid on the New Chimoio rebel base in Mozambique.

As the war was drawing to a close, the opposing guerillas began itching for a decisive battle. They have been trained by Cuban advisors to operate Soviet-made tanks and armored vehicles. In order to even the odds, the Rhodesian Security Forces pushed into production a number of Rhodesian armored vehicles in an attempt to expand its mechanized infantry squadrons.

Most of the designs were based on the chassis of the Mercedes-Benz Unimog light truck, with various different monocoque hulls added for protection. However, since the war was in its final stages, the vast majority of these projects never got the chance to fight against the guerillas in the Rhodesian Bush War but were instead integrated as part of the Zimbabwe National Army after the truce was signed.

Enter Spook. A joint development project of the Kew Engineering Ltd and the Rhodesian Corps of Engineers, Spook was an armored transport vehicle that sported a diamond-shaped hull design and a 4×4 drive. Featuring composite-armor, the Spook was to present an upgrade in terms of protection. However, during the test trial, its armor proved vulnerable to 7.62mm armour-piercing rounds which were part of the rebel arsenal.

The octagonal-shaped turret was usually armed with the Rhodesian signature light machine gun, the FN MAG, or heavier machine guns, depending on the vehicle’s role in the squadron. Although around 60 units were produced before the 1979 cease-fire came into effect, they took very little part in the final battles of the war. The vehicle was, however, quickly adopted and used extensively in the 1980s as part of the reformed Rhodesian African Rifles within the newly-founded Zimbabwe National Army.

Between 1972 and 1979, the Rhodesian Bush War claimed more than 20,000 lives. Beyond the borders of Rhodesia, the consequences of the war played a part in initiating the outbreak of civil war in Mozambique, which lasted for over a decade from 1977 until 1992 and would go on to kill over a million people.

Written by Nikola Budenovic. For similar articles, check out our Women at War feature on the Women Who Fought in the Rhodesian Bush War.