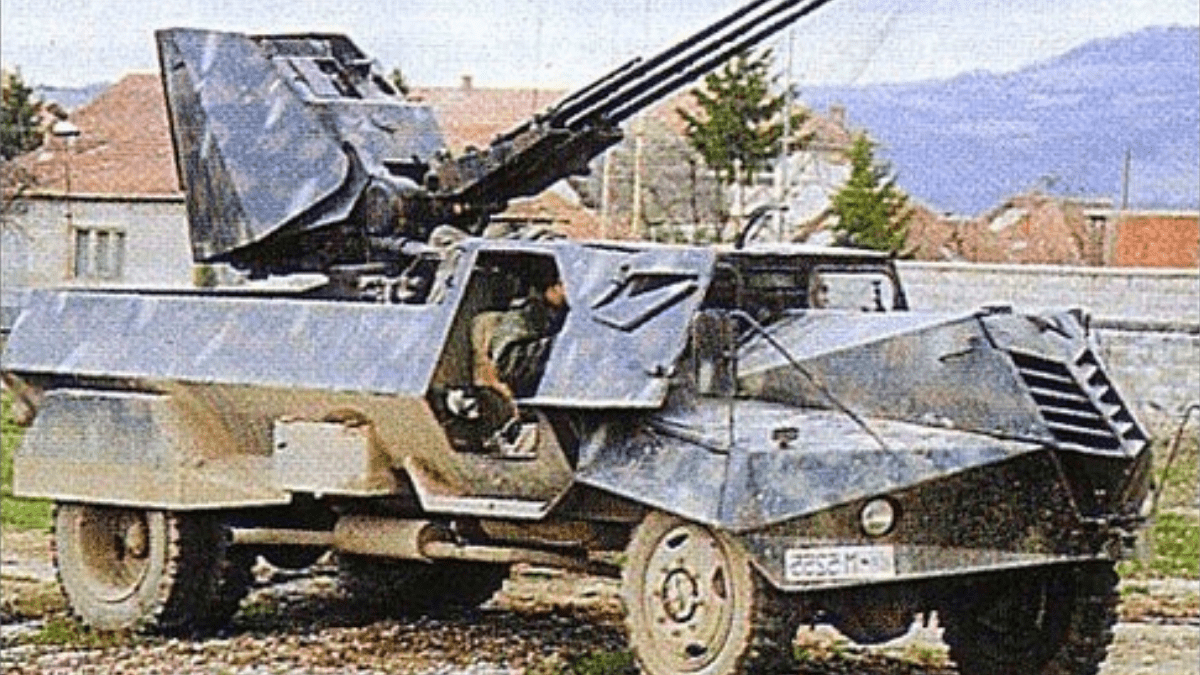 The Guards Light Infantry Bijeljina Brigade, more commonly known as just the Garda Panteri or Panther Guard, was one of the most well-known units of the Army of Republika Srpska largely due to the iconic war songs sung by Roki Vulović. The Serbian Panther Guard was also known for their good combat record and the theme of today’s article, their outlandish mad max vehicles used in the Yugoslav Wars.

The Commanders of the Garda Panteri

Before we get to the Mad Max vehicles used by the unit, we must talk about both the founder and most important commanders of the guard. The Serbian Garda Panteri was formed by Ljubiša “Mauser” Savić, who earned this nickname due to his love of the C96 Mauser pistol.

Prior to the outbreak of the Yugoslav Wars, “Mauser” was a social worker. More importantly, he was the founder of the local SDS (Serb Democratic Party) branch. Although he was not a schooled officer, Mauser proved himself to be a highly efficient field commander.

Another prominent commander in the guard was Branko “Panther” Pantelić. What set him apart is that unlike “Mauser” who was a Bosnian Serb, “Panther” was a mainland Serb who volunteered to join the guard.

As a major in the Yugoslav people’s Army, ”Panther” fought in Croatia and the infamous Battle of Vukovar. This made him the commander with the most combat experience in the unit. Using his knowledge and experience he would shape the guard into a truly capable fighting force.

During combat operations on Mount Majevica, ”Panther” was killed in action. But such was the respect that his soldiers had for him that they fought for two days to reclaim their commander’s body. In his honor, the unit was officially renamed the Panther guard.

The visual identity of the Panther Guard was forever surrounded by columns of improvised armored vehicles of different shapes and armed with various weapons. Captain Michel Ostojic, of French-Serbian origins, had the greatest credit for the creation of these Mad Max vehicles. He had left the French army at the beginning of the war in Yugoslavia to return to his homeland as a volunteer.

The Panther Guard was founded at the end of March 1992. By April, this inventor has made the first Mad Max truck: A light military truck TAM110 was used as a basis, on the platform of which a three-barrel PA cannon M-55 of 20 mm, known as “Trocevac”, was mounted. The assembly cabin was removed, and only the weapon received armor protection of 8 mm thickness, which was enough from light infantry weapons and fragments of grenades.

All of Captain Ostojic’s vehicles had a unique feature. In this case, it was a horseshoe placed on the front of the vehicles or a religious cross on the left fender. As the guard gained resources, Captain Michel would upgrade the vehicles even more. These Mad Max vehicles were created on the principle of using what is available at a given moment.

Thus, aircraft cannons NR-30 and GS-23 were requisitioned from the overhaul institute “Soko”. The weapons of MiG-21s, characterized by a very large cadence of fire, were highly favored. So too were TAM or FAP trucks, UAZ off-road cars, or armored cars like the BRDM-2.

One of the most sought-after weapons for these improvised armored vehicles was the fully armored multi-barrel rocket launcher on the TAM 110. The chassis of this truck was also used for the serial production of BoV armored vehicles. After complete armoring, where the vehicle received a characteristically pointed front part, a device with three launchers of unguided rocket shells of caliber 69.7 mm was mounted on the upper part of the vehicle.

Additionally, the launchers were armored so that they formed a “box” shape. The launchers originally arrived complete with an F-86 Saber fighter stemming from the Allied (American) military aid to Yugoslavia in the mid-1950s and were intended to operate on larger air targets.

After the stock of American missiles was depleted by the unit, 57mm unguided rocket launchers, which were originally intended for the MiG 21, were mounted. One of the most interesting constructions was created on the armored FAP-13 truck when the M-cannon was mounted on the back of the platform.

All protective plates were installed at a large angle to provide better ballistic protection. One of FAP’s trucks served as the basis for the K-13 PA missiles, from the combat set of the first MiG-21s. In Captain Ostojić’s workshop where he made these Mad Max Vehicles, each creation was unique.

For example, on the armored reconnaissance car BRDM-2, the dome was removed and an automatic 23mm cannon GS-23 was installed. A second engine was fitted in the vehicle and additional armor protection was installed on the outside.

When it came to tanks used by the unit, improvised armor was also added, and VBR M-63 Plamen was mounted on the armored TAM 5000. Large rubber pads would be mounted on T-55 tanks to “lower their radar signature” but there is no clear evidence of their effectiveness.

Throughout the Yugoslav Wars, Improvised armored vehicles were also made by other parties. The Croatian forces also utilized similar Mad Max Vehicles during the Croatian War of Independence. But it is noticeable that the vehicles of the Bijeljina Panthers had the most combat efficiency.

Disclaimer: The aim of this article is to shed light on one of the many overlooked aspects of the Yugoslav Wars, specifically the Mad Mad vehicles used by the Garda Panteri. It does not aim to condone, promote, or glorify any of the actions carried out by such units in the conflict.