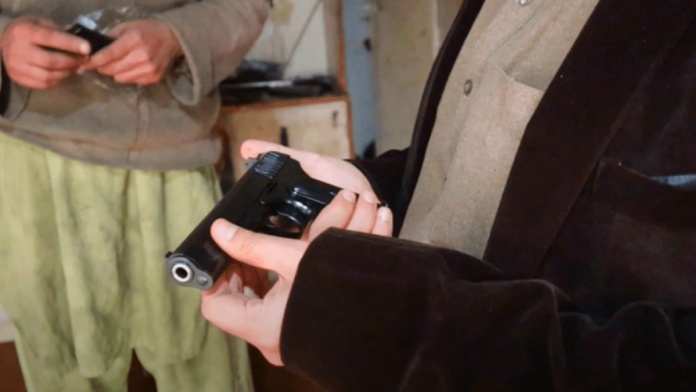 The following article: “Cottage Small Arms Industry in Darra Adam Khel, Pakistan” was written by Miles Vining, the founder of Silah Report: A research center that explores contemporary and historical Small Arms & Light Weapons in the Middle East, North African, and Central Asian regions. He is also the author of Into Helmand with the Walking Dead: A Story of Marine Corps Combat in Afghanistan.

Geographically speaking the phrase “Khyber Pass” broadly refers to the narrow passageway between the Afghan city of Jalalabad in Nangarhar province through the border crossing at Torkham in Pakistan and leading to Peshawar, the capital of the Khyber Pakhtunkhwa (land of the Pakhtoons) province. Otherwise abbreviated as KpK, the province contained what was known as the Federally Administered Tribal Areas (FATA) until 2017 when Pakistani armed forces moved in to take full control of the areas. Previous to becoming the province of Khyber Pakhtunkhwa, some of these areas were known as the North-West Frontier Province, a description that Winston Churchill would have been familiar with while serving in the ‘Frontier War’ in the late 19th Century.

The ‘Khyber Pass’ has captivated many in the English-speaking world throughout the annuals of history. The region has the distinction of implying a certain fascination with the local Pakhtoon tribes while at the same time evoking a theater filled with bloodshed. This began when William Elphinstone’s contingent of British soldiers and Indian sepoy’s attempted a retreat through the Khyber Pass from Kabul. The combined army and camp followers were almost entirely slaughtered while conducting fighting withdraw in the winter of 1842. Popular representations of the fighting have appeared in art pieces such as “Remnants of an Army” by Elizabeth Butler showing one of the few survivors striding into the fort at Jalalabad and “The Last Stand of the 44th Regiment at Gundamuck, 1842” by William Barnes Wollen that show British soldiers fighting off tribesmen in a last-ditch effort at survival.

This representation of the Khyber Pass as a valley of exotic and dangerous experiences continued into the late 19th Century where we see Winston Churchill describing operations on the frontier and mentioning the pass several times in his narrative, “The Story of the Malakand Field Force”. The opening of his book begins with a quote from Lord Salisbury in 1892, “They (Frontier Wars) are but the surf that marks the edge and the advance of the wave of civilization”. And of course, Rudyard Kipling mentions the mountainous valley in this opening stanza of ‘The Ballad of the King’s Jest’, “When spring-time flushes the desert grass, our kafilas wind through the Khyber Pass.”

“Frontier Wars are but the surf that marks the edge and the advance of the wave of civilization.”

Popular representations of the area continued into the 20th Century with such theatrical releases as “North West Frontier” released in 1959 and “Carry On Up the Khyber” in 1968. Both of these followed the comedic and tragic journeys of British colonial forces set in the time of the Raj while adventuring in what was then the North West Frontier Province. Depictions of the province in theater bring us to the movie “Son of a Lion”, directed by Benjamin Gilmour and released in 2007. Shot on location in Pakistan, it is a fictional story about a young boy craft producing firearms with his father in the infamous village of Darra Adam Khel.

The story of Darra Adam Khel, or more popularly shortened to “Darra” in Urdu, Pashtu/Pakhtu, and Dari begins in the early part of the 20th Century with British efforts at gun control in the region. Previous to producing arms, there had always been a very vibrant trade in arms smuggling and limited craft modification. We see examples of this in European flintlocks that had been turned into ‘Jezail’ or ‘Dun-Pur’ rifles in the 1800s where stocks have been carved out, and the rifles have the distinctive feature of lacking trigger guards. In the course of extensive fighting in the region during the late 1800s and the early 1900s, British officials attempted to stiffen the trade of arms by controlling it. This action combined with a continuous need for arms led to a cottage industry of craft production and craft assembly in the tribal areas.

Darra Adam Khel became one of these centers of production, among many other villages and locales. However, it wasn’t always this way as Darra was similar to many of these other village production centers and didn’t have the significance it now does in the region. The ebb and flow of the production has changed as the markets have catered to the needs of the local populace as well. The goal of this reproduction wasn’t to deceive buyers, but instead to offer firearms at a significantly reduced price that were a locally made facsimile.

Initially, production centered around reproducing British material that was in high demand. This included Martini and Lee Enfield-patterned rifles but also Webley handguns. As small arms developed and progressed through the ages, the cottage industry gun markets responded in kind, beginning a tradition of meeting customer demand with some of the wildest combinations of small arms design. As an example, due to a surplus of Turkish 8mm Mauser ammunition in Pakistan, gunmakers began producing 8mm bolt action rifles that took the form of Kalashnikov-patterned rifles but didn’t utilize a gas-operated select-fire operating mechanism. However, the rifle met the needs of using plentiful 8mm, had the appearance of a popular Kalashnikov rifle, but was in a reliable bolt action that the gunmakers could easily produce, thus meeting customer demand for an affordable rifle that was reliable and up to contemporary aesthetic standards.

But how do these arms stack against their serialized production counterparts? Historically and even in contemporary times, Pakhtoon fighters in the region have always valued the ‘real deal’ as one seller in Kabul has put it when it comes to purchasing small arms to fight with. The concept of these ‘Darrie-firearms’ (a term used to designate firearms from Darra Adam Khel) as a counterfeit product to deceive is a misattributed idea that is often slapped on the arms being produced in these cottage industries. Although the Darrie-firearms do find their way into the hands of militant hands, whether it was the disorganized network of Afghan Mujahideen in the 1980s or the Taliban of the 1990s and 2000s, the fighters on the ground, across the border in Afghanistan have always demanded authentic small arms. This is mostly due to the quality concerns that are extensively known about Darrie-firearms in the KpK-region and in Afghanistan. The prices of legitimate firearms are often several times the price of their facsimile counterparts as well, and for good reason.

In recent times many of these villages and markets have begun shutting down due to increased Pakistani government control or lacking market value. Some of this cottage industry has transitioned to an industrial capacity that exists in Peshawar today, where Pakistani corporations produce firearms using CNC machines for the legal market and occasionally for the US market. This is the case with Daudsons Armoury, a company that used to produce shotguns for Cimarron Firearms, a US-based firearms company that caters to the Cowboy Action crowd. Regulations have been tightening in regards to Pakistani firearms laws as well, also affecting the trade out of Darra Adam Khel.

Today the Darrie-firearms continue to be a point of fascination by many US and European small arms enthusiasts, while their Pakistani collector counterparts often look past the Darrie guns and are more interested in the “real deals” of the region. Until further regulation shuts down the cottage industries, we should continue to see more of these odd firearms that are continually being handmade by local gunmakers in Darra Adam Khel.

** The photos of the gun Market in Darra Adam Khel were provided by Global Projects who featured in our related article “Extreme Tourism in the Gun Markets of Pakistan“.