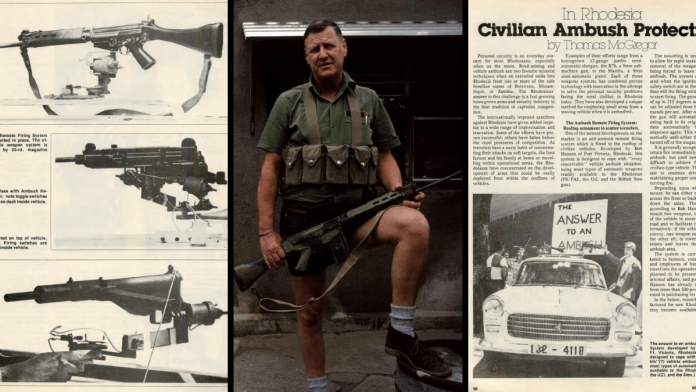 1978 in Southern Africa, what a time to be alive. Bush Wars, the heyday of the Soldier of Fortune Magazine, Rhodesian brushstroke camo, and fitting remote control, anti ambush firearms to the roof of your car. In FAL Barrel on a Hot Car Roof, we’re going to look at the unique anti ambush firearms used by Rhodesian civilians in the late 1970s as detailed by SOF magazine in 1978.

At the height of the Bush War between 1964 and 1979, Rhodesia was an inherently dangerous place. Whilst the bulk of the fighting took place between the Rhodesian security forces and a coalition of various nationalist guerrilla forces, civilians often found themselves in the crossfire. Especially at the hands of the latter.

Mining roads and launching vehicle ambushes were common methods for nationalist guerrilla forces such as ZANU and the ANC. These rising attacks combined with international sanctions placed on the unrecognized country of Rhodesia soon saw the growth of home-grown arms and personal security industries. One of the most sought after personal security additions was that of anti-ambush firearms attached to a car roof that had the ability to unleash small arms fire from a FAL barrel whilst being able to drive under control.

This home-grown anti ambush weapon was known as ”The Ambush Remote Firing System”. This was designed to be fitted to civilian vehicles in order to combat every type of conceivable ambush attempt a civilian might face. The most common weapons used were those most common in Rhodesia at the time such as the British Sten Gun, the Israeli Uzi, and of course, the FN Fal.

The weapons would fire in a repeating arc until either the magazine was empty or the driver released the firing trigger. In the event of having to leave the car in the event of an ambush, the system had the ability to be dismounted rapidly for the car passengers to engage in a conventional firefight with their attackers.

Of course, it wasn’t just Rhodesian civilians who prepped themselves for deadly road trips. As detailed on South Front, the men of the Rhodesian Security Forces created their own ingenious vehicle protection techniques. One of the most ingenious methods the men in Rhodesian brushstroke came up with was switching their FAL barrel for an iconic piece of Russian kit and affixing two Kalashnikov assault rifles behind the passenger seats of their pickup trucks.

These weapons were firmly fixed to the bed of the truck. In the event of an ambush, the body of the car. In the case of ambush, the driver would speed the vehicle up. The Kalashnikov trigger was linked to a pedal on the floor of the truck which was activated by the pressure from the gas pedal. Although the weapons were only single-use and needed to be manually reloaded after unloading its thirty round capacity, firing over sixty 7.62 rounds across 150 ft of a dusty Rhodesian road usually did the job when combating an ambush.

“The civil war in Rhodesia was raging for 15 years without stop. These and other DIY weapons were sometimes the only chance to make it through and survive. Well, until the next ambush at least.”

The ingenuity didn’t stop there. Rhodesian soldiers soon began replacing the Kalashnikovs in the beds of their pickup trucks with two RPD machine guns. The carnage unleashed by the 90 round snail drums affixed to the RPD was preferable to the 30 round AK magazine. The Kalashnikovs were not put into retirement though, they were often sawed off and affixed to custom made turrets which were ideal when installed in the driver’s door.

For more articles on the Rhodesian Bush War check out our further articles covering everything from brushstroke camo-clad women fighters to the homemade armored fighting vehicles used by the Rhodesian military!