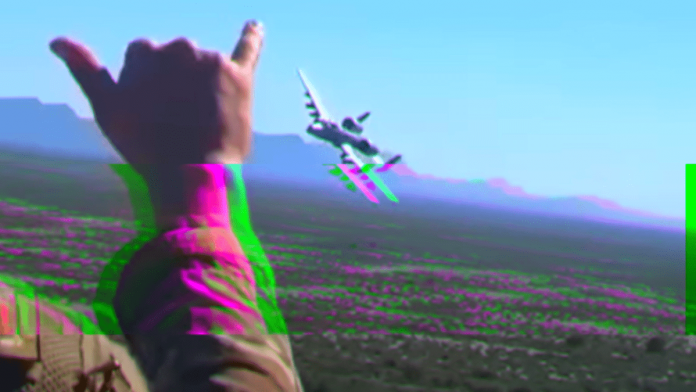 The following footage shows U.S. troops on a training operation give the Shaka sign to a low flying A-10 “Warthog” Thunderbolt. Beginning service in the 1970s, the A-10 Warthog has since gone on to be a feature of various wars involving the U.S. military from Grenada and Kuwait to Balkan countries such as Bosnia and Kosovo. During the 21st Century, in particular, the aircraft became an icon and a cult image online. Primarily due to its involvement in the War on Terror.

The Shaka symbol originates from Hawaii and is a characteristic part of Hawaiian culture. It’s often known as “hang loose” and is generally intended as a friendly gesture stemming from surf culture, particularly that of Hawaii. It consists of extending the thumb and smallest finger while holding the three middle fingers curled, and gesturing in salutation while presenting the front or back of the hand.

Since its birth in the surf culture of Hawaii, the shaka sign has since spread around the world. However, the hand gesture itself has come to mean a range of different meanings in different cultures, countries, and regions of the world. Amongst the U.S. military, it is often used to identify yourself as a ”friendly” and not an enemy combatant.

The Shaka sign in the U.S. military made it onto the big screen through the movie 13 Hours which depicted the events of the infamous Benghazi siege that took place in Libya on the tenth anniversary of 9/11. The Shaka sign was used by the U.S. Special Forces in the movie to distinguish if the local Arab fighters were an ally or an enemy. However, as the movie goes on it becomes clear that the enemy has figured this secret hand signal out and begins to use it themselves, thus sabotaging the usage of the Shaka sign.

Interestingly, the Shaka sign in the U.S. military was the cause of a mild controversy during 2005 in the early days of the Iraq War. The hand signal was restricted on the Camp Victory base after a National Guard soldier mistakenly flashed a Shaka hand to a senior U.S. Army officer instead of a conventional salute.

– U.S. Soldier on the restriction of the Shaka sign at Camp Victory

In other countries, the Shaka hand sign can mean something completely different from its original intention in Hawaii. For example, in Australia and Russia raising a thumb to your mouth whilst pointing the little finger to the air is usually seen as an invite to join someone for a marijuana joint as the symbol looks like a pipe. In New Zealand, the gesture is a little more sinister as it’s used to symbolize smoking a “P” (methamphetamine) pipe. Additionally, Shakas are also seen as the gang salute for the infamous Mongrel Mob which is an organized and violent street gang spread out across New Zealand.