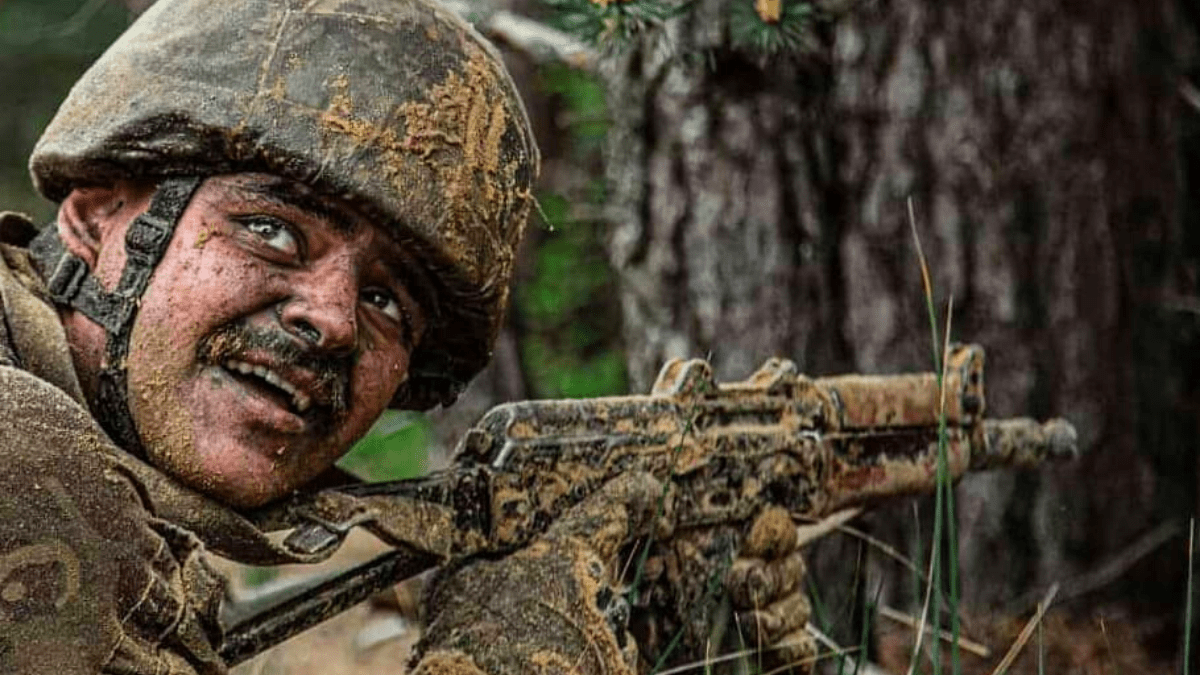 At Reaper Feed, we’ve covered the war in the Donbass region of Eastern Ukraine from both sides of the frontline. Recently, we had the chance to speak with Johnny, also known as Cossack Gundi – a volunteer fighter in the ranks of the Ukrainian Army who entered the conflict after deploying with the YPG in Northern Syrian.

Originally from the United Kingdom, Johnny is a unique combatant in the conflict in Eastern Ukraine. Since leaving his British homeland 6 years ago, he has seen his fair share of combat on a journey that has seen him go from the war against ISIS in Syria to the trenches of Donbass.

Naturally, Johnny has a serious array of experiences and stories under his belt. With his upcoming frontline documentary providing an unprecedented insight into the War in Donbass, we couldn’t pass up the chance for a chat with him.

So Johnny, tell us a little bit of background about yourself

Everyone knows me by Johnny in Ukraine, It’s a name given to me by my first commander because of a middle name. Previously I had fought in the Kurdish YPG in northern Syria. I’d made two trips there, one in 2015 for 9 months and then the second in late 2016 for 8 months.

After my second trip to Syria, I attempted to resettle into society in the UK. However, this was something that I soon learned was a lot harder than I thought. However, whilst in Syria I had met somebody who had fought for the Ukrainians in Donbass and enlightened me to the reality there.

You’re in the process of making a documentary made on the frontlines of Donbass, can you tell us a bit about that?

Sure. The aim of the documentary is to shed light on the reality of living in a trench for long periods of time. It’s also worth pointing out that there’s currently a ceasefire that only the Ukrainians seem to be sticking by while the sound of shelling from the separatists can be heard further down the line.

There’s no other documentary like this from the eyes of the soldiers in the trench and their day-to-day life living like moles underground. I’m hopefully aiming for it to be released in December. It’ll be available to watch on YouTube, but that could change depending on other factors.

What was one of your most hair-raising experiences in the War in Ukraine?

Narrowly missing an SPG-9 Kopye missile that was fired at us as we were carrying equipment off the position preparing to leave. Luckily, the missile fell 10 meters short and the trees nearby took the brunt of the blast.

I saw you had to get run over by a T-72 tank in training, what was that like and what other crazy shit have you undergone in training in Ukraine?

It was definitely pretty interesting, to say the least. But whether it’s actually useful? That’s debatable! But other than that, there has been nothing too crazy. It’s mostly pretty standard military training.

You’re often seen armed with an AKS-74U in the trenches of Ukraine. How Come?

In my Platoon, I’m the RPG man so you’re issued with the AKS-74U because you’re expected to carry the rocket-propelled grenade launcher plus the grenades to go with it. It’s an okay rifle. It’s lightweight and compact which of course makes jumping with it a lot easier.

You’re pretty socially active and share a lot of your experiences and day to day life in the War in Ukraine. Do you ever get any shit from separatists on the other side of the frontline?

I mostly get a lot of shit from pro-separatist sympathizers. But sometimes I’m contacted by the odd Separatist or two on the other side of the frontline. Most of the time I’ll probably debate them on their views. Provided they aren’t just spamming my chat with jibberish.

Upon your arrival in the Ukrainian Bootcamp, how were you treated by the Ukrainians initially as a foreign volunteer?

A lot of the Ukrainians thought I was crazy and couldn’t grasp the concept that a British guy would want to fight for them. For the first 7 months, I was still getting used to the Ukrainian military system, the biggest problem was orders and understanding them but I slowly learned by observing and listening.

What have you found the most difficult about integrating into life in Ukraine?

Definitely the language barrier. The language pronunciation is a real bitch for me. I understand a lot but I struggle to pronounce the words most of the time. My first experience with Ukrainian military food was an eye-opener too.

Just around the time, I joined in 2018 was the last month before they switched from the old Soviet-style gruel that I wouldn’t even feed my dog to a more reasonable meal in line with more NATO standard nutrition

How did the British troops who came to train with the Ukrainian Army react when they saw a fellow Brit amongst the Ukrainians?

The lower ranks of the British troops who came thought it was cool. They helped me out with a lot of stuff etc. However, as soon as who I believe was their officer showed up, he quickly had me removed from the training. Probably because me being a British citizen would look bad politically.

Interesting. On that topic, have you ever faced any trouble in the UK for your role in Syria or Ukraine?

For my role in Syria, yes. Both times after returning to the UK from Syria I was arrested under the terrorism act on ore charge bail for planning to commit acts of terror against the Islamic state. I haven’t been back to the UK since coming to Ukraine. But I’m sure if I was to return after this the police would definitely want to speak with me.

So what does the future hold for you, will you settle in Ukraine or do you see yourself redeploying if another conflict appears on the horizon?

Well, I have roughly 6 months left of my Contract in the Ukrainian military. So depending if I can find work after this, I’d ideally like to move into conflict journalism on the side. If I can’t find work in that field, then I’ll probably sign up for another year’s contract and try my hand at conflict journalism again after.

What do you see as the ultimate end game to the conflict in Ukraine? A de-escalation and a Transnistria-type settlement or something else?

With the way things are going, I definitely see the end game to the War in Donbass being similar to a Transnistria-type situation. if it ends the conflict and people stop dying then I’d be happy.

I think this conflict has gone on for far too long to gain anything back out of it by holding the trench line because the only person that is capable of ending the conflict is Russia and they have no interest in doing that. Russia will continue to use the DNR/LNR separatist groups as proxies to keep Ukraine unstable.

A lot of the Ukrainians have mixed opinions. Some view it the same way as I do whereas others think taking Donbass back by force would be a good idea while not thinking about the consequences and the amount of death that would come from such actions. Many others don’t really know because the situation can go in any direction any moment

A big thanks to Johnny for taking the time to sit down with us for a brief interview about his time in two of the most prominent conflicts of the decade. To keep up with his journey on the frontline of Eastern Ukraine, you can find his Instagram here.

Disclaimer: This article is bipartisan and does not aim to take sides in the War in Ukraine. It is published to provide an insight into the lesser-seen side of this conflict. All of the photos used in this article are the property of Cossack Gundi and may not be reused or republished without express permission from himself.