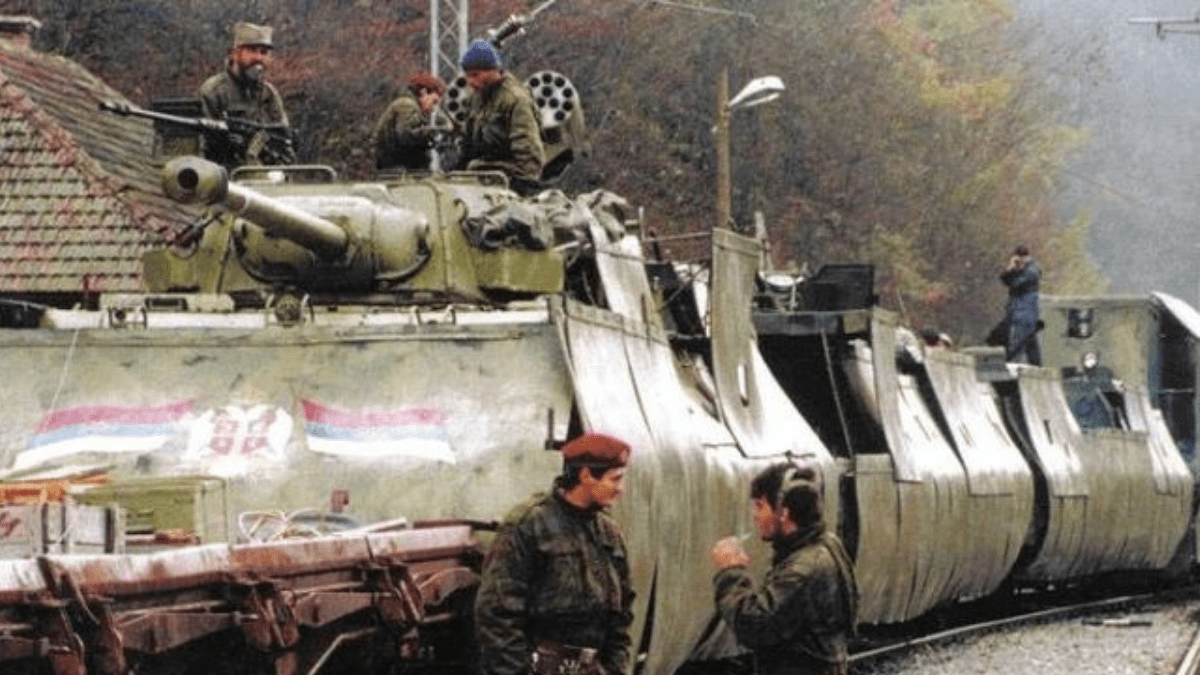 The war in the former Yugoslavia is full of strange stories and events. From Mad Max Vehicles to black Neo-Nazi mercenaries, we’ve covered a lot of them. But today, we’re going to cover one of the weirdest and most badass stories of the Yugoslav Wars: the tale of the Serbian Krajina Express.

In WW1 and WW2, armored trains were a common aspect of combat and popular amongst military forces in Russia and Eastern Europe. In the post-WW2 era, armored trains also featured in conflicts from the First Indochina War and the Cuban Revolution to the Sino-Soviet split the Cold War. Few were as iconic as the Serbian Krajina Express.

This is a story of an armored train fitted with an array of lethal weapons originally built by everyone from the Nazis and Soviets to the U.S. This war beast was used to extreme effectiveness in the horror and carnage that was the Yugoslav Wars of the 1990s.

Origins of the Serbian Krajina Express

The Krajina Express armored train was created at the railway depot in Knin during the summer of 1991 at the initiative of railway workers from Knin as a contribution to the defense of the Serbian Autonomous Region of Krajina.

The original composition consisted of two wagons armed with old anti-aircraft guns, a
German 20 mm Flak 38 cannon on the first car and a 40 mm Bofors M-12 cannon on the second car. The trophy weapons loaded on the train originated from the arsenal of Territorial Defense.

The General Motors JZ 664-013 diesel locomotive was of American production and was determined to tow the lethal creation. The entire train was protected from enemy fire with 25 mm thick armor as well as sandbags.

At the beginning of the war, the armored train was part of the SAO Krajina Militia (precursor of the Serbian army of Krajina). The Krajina Express first saw combat against the National Guard Corps in Lika, near Štikada. The armored train also took part in the fighting in the Dalmatia region near Drniš.

A hundred yards long, roofless, and loaded with guns, the “Krajina Express” is an example of the firepower Serbs are throwing at defenders of Bihac.

– A Deseret article on the Serbian armored train.

In September 1991, the train returned to Lika, where it was engaged in supporting the unblocking of the weapons depot in Sveti Rok, where the train crew defended itself from an infantry attack by Croatian forces with an M53 machine gun, returning fire through
loopholes on the side of the armor.

It is believed that during his several-week stay in Lika, the train was named the Krajina Express. Prior to the armistice in January 1992, Krajina Express participated in the protection of the Zemunik military airport near Zadar.

During 1992, the train was reinforced for another combat wagon armed with single-barrel and three-barrel anti-aircraft guns 20 mm M-75 and M-55, as well as a platform for a 120 mm mortar. The German Flak 38 cannon was replaced by a stronger Soviet 76 mm ZIS-3 cannon.

The crew of the armored train, as part of the Krajina MUP, took part in the fighting even when the train was not engaged, as in the “Corridor” operation during the summer and autumn of 1992. It was sometimes followed by local trucks carring hot soup and fresh bread to feed the crew.

The third car of “Krajina Express”. 12.7mm M2 heavy machine gun and two rocket
launchers are visible After the Croatian aggression on Velebit as part of the “Maslenica 93” operation, the train crew was again engaged in artillery support from the train itself, as well as in Infantry roles fighting outside the train.

In that period, the most famous operation of the armored train was performed, when a wagon with 3650 kg of explosives and 5 tons of metal waste was released from Serbianb-held town of Benkovac towards the Croatian-held town of Zadar.

The Krajina Express train pushed this wagon all the way to the village of Nadin, from where the wagon moved independently along the railway by a natural fall towards the railway tunnel near Zadar, which was used by Croatian forces as a warehouse for artillery ammunition.

The wagon was rigged with anti-tank mines on the bumpers as detonators. The exact effect of this diversion is not known, but the subsequent powerful explosion caused panic among the population of Zadar.

In the summer of 1993, the train’s armor was reinforced with reinforced rubber, which in that period proved to be successful protection against the action of anti-armor projectiles on armored vehicles. In the same year, the train was rearmed, so instead of the ZIS-3 cannon, a self-propelled howitzer of American production, 76 mm M18 Hellcat, was loaded on the combat wagon.

In 1994, the 7th armored train was engaged on the Bihać battlefield across the Una railway in cooperation with the Army of the Republika Srpska and the National Defense of the AP of Western Bosnia. The Bosnian town of Bihać had been under a devastating siege for two years prior.

The train operated against forces of the 5th Corps from Bihać with anti-aircraft launchers of 57 mm missiles and a self-propelled M18 Howitzer. On the line, the train encountered various diversions, mines, and destroyed rails, and the train moved slowly with a unit of engineers as a precursor who performed demining and repaired the destroyed line.

During the fighting on the Bihać battlefield, the second combat car was hit by an enemy 9M14 Malyutka anti-tank missile. On that occasion, the additional rubber protection proved to be effective and reduced the cumulative jet of the rocket, so the only consequence was one member of the Krajina armored train crew wounded.

The fighting around Bihac lasted until December 1994, when the Krajina Express withdrew to Knin. The combat that had raged during the gruelling siege of Bihac had claimed the lives of almost 5,000 people.

What Happened to the Serbian Krajina Express?

Due to the complex situation on the battlefield, where Croatian forces went on the offensive and took control of important points on the Dinara, the train was less engaged during 1995. The crew actively participated in the fighting as an infantry unit, while the train in Knin was on standby with the reserve crew.

After the beginning of the Croatian aggression on the Republic of Serbian Krajina, strong artillery attacks on Knin and other Serbian cities in the early dawn on August 4, the armored train Krajina Express received an order to go from Knin to Lika.

Due to the general disarray in the Republic of Serbian Krajina, the train crew decides to destroy the train and start evacuating people. The armored train was released on the slope of the Lika railway at full speed and subsequently derailed into a ravine. Some of it was recovered, turned into a monument, and can be visited today by the public.

The locomotive JŽ 664-013, which towed the Krajina Express train, was repaired in
Gredelj after the war and recycled to begin a new role with the Croatian Railways under the new name of HŽ 2062-055.

Incredibly, the 20-man train crew of the Serbian Krajina Express only saw two of their men killed during the entire war. The men were killed by enemy artillery fire and were the commander of the 7th armored train and its train driver.

The Weapons of the Serbian Krajina Express

In addition to copious amounts of heavily effective armor, this war train managed to survive the brunt of extreme combat through the height of the Yugoslav Wars thanks to a lethal array of Soviet, Yugoslav, and U.S. weapon systems fitted. Let’s take a look at what it was packing!

Between 1993 and 1995, the armored train was fitted with 76 mm Howitzers from American M18 Hellcats. An iconic Allied tank destroyer of WW2, may were sold to other countries after the war. Yugoslavia, in particular, received over 250 Hellcats and kept most of them in reserve until the outbreak of the Yugoslav Wars 1990s.

Between 1992 and 1993, the armored train was fitted with Soviet-made ZIS-3 76 mm Anti-Tank Guns. This artillery weapon was first used by the Soviets in WW2. Following the Second World War, the Soviets exported it to their allies in the former Yugoslavia where it eventually fell into the hands of different forces in the Yugoslav Wars.

Originally designed in Sweden by the AB Bofors arms factory back in the 1930s, this is an anti-aircraft autocannon heavily used by the allies in WW2. The weapon saw action in multiple conflicts after WW2 up to the first Gulf War and of course, the Yugoslav Wars. The Krajina Express utilized this weapon very well.

Up until 1992, the Krajina Express was armed with PA cannon 20 mm Flak 38 until it was replaced by the ZIS-3. The Flak 38 was an anti-aircraft weapon created by the Nazis, it was used by multiple German units in WW2. A massively popular weapon, it was the most mass-produced German artillery weapon of WW2.

The armored train was also fitted with a weapon heavily featured on improvised fighting vehicles: The UB-32. This is a Soviet-made 57 mm rocket pod designed for aerial use in close air support and ground attack situations. It’s often featured on technicals, especially in the Middle East and North Africa.

The train was equipped with three Yugoslavian-made M55 20mm anti-aircraft guns. Designed back in 1955, thousands were produced. In the Yugoslav Wars, the weapons were used by almost every warring faction from the Military of Serb Krajina and the Army of Republika Srpska to the Slovenian Territorial Defence and the Croatian National Guard.

The train was equipped with an M74 120mm mortar. This smoothbore, muzzle-loading, high-angle-of-fire weapon was originally created in Yugoslavia to provide the Yugoslav People’s Army with long-range indirect fire support. Upon the collapse of Yugoslavia, the weapon was used by various different factions and military forces.

Originally designed by John Browning in the latter phases of WW1, the M2 Browning fires the powerful .50 BGM / 12.7 mm round. This iconic weapon has featured in countless conflicts from the Korean and Vietnam Wars to the Falklands conflict and the Soviet-Afghan War. The Krajina train was packing these .50 caliber machine guns too.

Strikingly similar to the Nazi MG42, the Yugoslavian M53 was created after WW2 using equipment, machinery, and ammunition the Germans left behind. Apart from a slower fire rate, the M53 was almost identical to the original German MG-42. This general-purpose machine gun was heavily utilized onboard the Krajina armored train.

Disclaimer: The aim of this article is to shed light on one of the many overlooked aspects of the Yugoslav Wars, specifically the armored train utilized by the military of Serbian Krajina. It does not aim to condone, promote, or glorify any of the actions carried out by such units in the conflict.