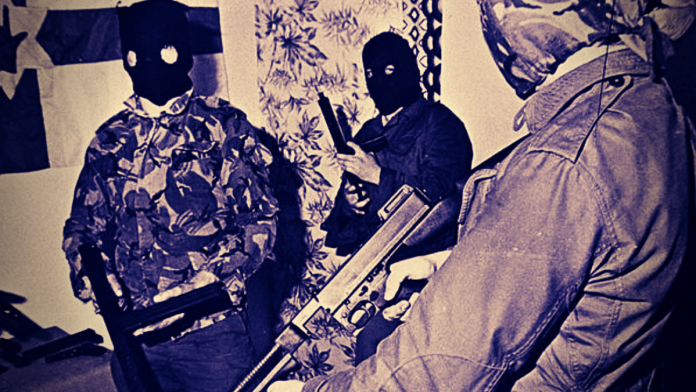 The following article “Loyalist Arms – 5 Homemade Weapons From The Troubles” would not have been possible without the immense amount of research provided by Balaclava Street. For more information on the niche aspects of The Troubles, check out their website here.

Between 1969 and 1999, Northern Ireland was gripped in a conflict known as The Troubles. The conflict saw decades of open and guerrilla warfare between Republicans, Loyalists, and British Security Forces. Northern Ireland quickly became flooded with smuggled weapons, as well as those of a crude and homemade variety. In this article, we’re going to look at the latter. In particular, those used by Loyalist paramilitaries in the conflict. This is Loyalist Arms.

Throughout The Troubles in Northern Ireland, the Loyalist procurement of illegal weapons came in a variety of ways from stealing weapons from British Army bases and private gun owners to buying them from underworld gun smugglers. Raids by the security forces, losses on operations, and the aftermath of many informers meant hard-earned supplies were often wiped out. This led to another method of procuring loyalist arms: homemade weapons.

The prevalence of homemade weapons in conflicts filled with conventional arms is nothing new. In 1943, the year prior to the Warsaw Uprising in WWII, the Polish resistance created a submachine gun known as the Błyskawica (lightning). An interbred design that took the best points of both the British Sten and the German MP-40, over 700 of these open bolt SMGs were made by Polish gunsmiths in secret. It was the only covertly mass-produced weapon during WWII and was used heavily against the Nazi enemy.

So what does a WW2 Polish submachine gun inspired by the Sten Gun have to do with homemade Loyalist arms? Well, it’s no secret that open-bolt submachine guns are not only the most affordable form of fully-automatic weapon, they are also the simplest to make. At their core, they offer enhanced compared to any handgun, and yet they are much simpler to build than any rifle, especially those of a semi or fully-automatic variety.

Prior to the outbreak of The Troubles conflict in 1969, the bulk of employment for working-class communities in Belfast was in heavy industry. Whether it was building ships at the Harland and Wolff shipyard or making planes at aerospace institutions like Short Brothers, industrial skills were ingrained amongst many Loyalists. In the 1970s as the conflict was well underway, some senior Loyalist paramilitaries remarked on how these skills were used in the production of homemade Loyalist arms.

– – Billy Mitchell, a leading member of the Ulster Volunteer Force (UVF) in the 1970s.

Whilst the 9mm Sten-inspired sub-machineguns were arguably the most popular type of homemade weapon in the era, the homemade Loyalist arms produced by the paramilitaries under moonlight spanned a large range. There were few weapons niches that were not filled and the arsenals ranged from 22. caliber pen guns to homemade Uzi submachine guns. In this article, we’re going to break down 5 of the most iconic homemade weapons used by Loyalist paramilitaries.

In September of 1988, what is said to be the most extensive large scale illegal gun factory ever found in Europe was raided by British Security Forces. Located in the region of Ballynahinch in Country Down, the former engineering workshop was being run by a former British Army soldier named Sam McCoubry who was said to have been supplying weapons to Loyalist paramilitaries for around 20 years.

The raid uncovered four ammunition making machines and 20 submachine guns inspired by the Sten design made from steel tubing. However, the most significant find was that of the Ballynahinch Uzi. As well as a dismantled Israeli-made Uzi McCoubry was using for reference were two well-engineered, fully functioning copies. They were said to be the most sophisticated homemade Loyalist arms ever discovered up until that point. Across the premises were enough parts to manufacture over 800 of these lethal weapons. McCoubry was given a jail term of 14 years.

The prevalence of British Security Forces in Northern Ireland during The Troubles meant an abundance of checkpoints as well as raids on hotbeds of militant activity in both Loyalist and Republic areas. This led to the creation of firearms that could be easily concealed in plain sight and not arouse suspicion, such as the pen gun.

Whilst Loyalist pen guns varied, they are most commonly constructed using a standard tubular pen body. However, the interior houses a spring-loaded
striker and a screw-on barrel, often designed to look like the writing end of a
pen. The pen would function as normal with a regular writing nib. The trigger would often be hidden and the firing mechanism for a .22 caliber round was often triggered when two halves of the pen would be clicked together.

Whilst you would be forgiven for assuming that the homemade weapons that featured throughout the conflict in Northern Ireland were produced outside of prison walls, you would be wrong. In the mid-1970s, a violent feud erupted between the UVF and the UDA. In 1976, a gang of UDA prisoners managed to smuggle handguns inside Long Kesh prison, escape their wing, and invade the UVF wing in an unsuccessful attempt to murder a UVF prisoner who had been violently active in the feud. The UVF knew they needed firearms of their own.

Rather than the risky method of smuggling conventional guns into Long Kesh prison, the UVF decided to manufacture shotguns with material around them. Thus, the ”Trombone” homemade shotgun was born and became another addition to the growing range of homemade loyalist arms being used in the conflict.

He pointed to the stanchions and told us they were the same diameter as a 12 gauge shotgun. All we had to do was cut them into barrel lengths and using a bed end which fitted neatly over the barrel end, affix a firing pin and we had a makeshift shotgun.

– Plum Smith in his book “Inside Man“

The brainchild of a technical-minded UVF prisoner known as ”The Mechanic”, these crude single-shot weapons were constructed from the legs of prison bunk beds and tubular basketball stanchions. The ammunition was then smuggled in and would have proved lethal at close quarters in prison wings.

One of the variants of homemade Loyalist arms most unreliable and hazardous to the user was that of Zip Guns. Whilst they vary massively, Zip Guns are generally improvised, single-shot, small-caliber firearms lacking a conventional trigger mechanism. They were commonly carried and used by the so-called ”Tartan Gangs” which comprised of young men who would violently intimidate Catholic families living in loyalist areas of Belfast.

Many Loyalist paramilitaries with experience of using Zip Guns recall how they were only able to be fired once before having to be thrown away. Extremely inaccurate except at extremely close range, they had a tendency to harm the firer through burns and backfiring, more often than the victim the weapon was being aimed at.

1. Shipyard Specials – Loyalist Arms Made in Harland and Wolff

Amongst all of the homemade Loyalist arms used in the conflict, the so-called ”Shipyard Specials” were the most prevalent. Inspired by the Sten, these open bolt SMGs were remarkably similar to the Sterling L2 submachine gun that was commonly carried by British security forces in Northern Ireland. With a tube-steel receiver, often made from repurposed metal table legs, the most complicated parts of the weapon like the barrel and the magazine were often stolen from British Army bases or bought from arms parts dealers.

The term ”Shipyard Specials” derives from the place of manufacture, which was often under the moonlight in the world-famous Harland and Wolff shipyard. These hastily made weapons often lacked a stock and an aiming reticle meaning that a “spray and pray” approach was common. The smoothbore barrels often meant that rounds would tumble and leave victims with horrific wounds.

Former loyalist paramilitaries with experience of using the weapon claim that sometimes the firing mechanism would only release when the magazine was emptied. So when the trigger was pulled, you had no other choice but to spray the entire magazine. This was due to poor design or poor manufacture leading to the bolt movement being too short to engage the sear.

Whilst the general reputation of these homemade Loyalist arms was poor with them being largely inaccurate and a threat to both the user and the target, they are nonetheless played a significant and violent role in The Troubles conflict. Most interestingly, they provide a fascinating insight into the age-old engineering abilities of the working class of Northern Ireland, whether it was rebel silencers or homemade SMGs, being utilized for deadly purposes in a time of war.