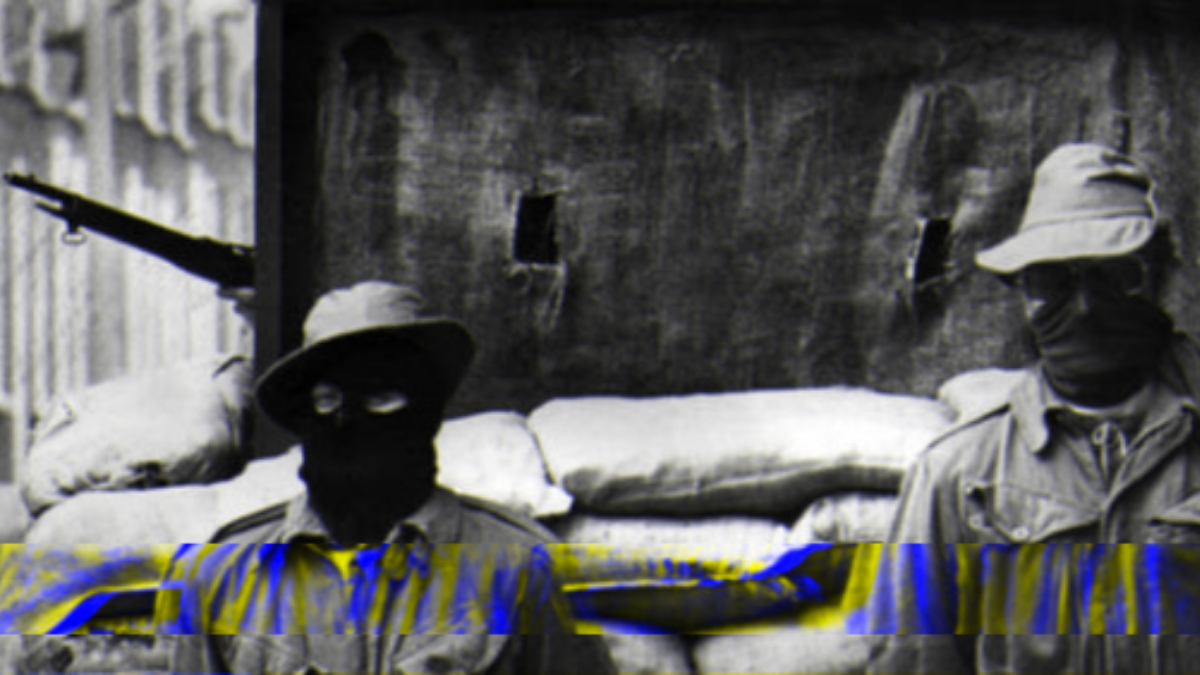 Alongside the Republican Falls Road, the Shankill Road is one of the most well-known roads in Belfast. Cutting through the center of the working class, loyalist heartland area of the Shankill, it was a hotbed of violence during The Troubles conflict that plagued Northern Ireland for decades between 1969 and 1999. The Unionist Belfast Street From The Troubles stretches around 1 and a half miles.

Largely dominated by shops, small businesses, and fast food outlets, the residents of the Shankhill largely live in terraced streets that branch off from the Shankhill road. Like today, this Unionist Belfast street from The Troubles was a hotbed for loyalist activity. As a result, it was also the site of numerous violent attacks from Republic paramilitaries. As the adjacent Falls Road was from Loyalist paramilitaries.

This photo was taken somewhere on the Unionist Belfast street from The Troubles. It shows paramilitaries of the Ulster Volunteer Force preparing for a show of strength following the damage inflicted on the organization after the Supergrass arrests of 1983 that saw various members of the organization jailed as a result of evidence given by supergrass Joseph Bennett.

Supergrass is a term used to describe arrested paramilitaries who revealed the identities of their compatriots to the security services, most commonly in exchange for immunity from prosecution. Throughout the Troubles in Northern Ireland, the Supergrass was a significant weapon used by the authorities against both Republican and Loyalist paramilitary forces. By late 1982, over 600 paramilitaries had been arrested due to the actions of just 25 ‘supergrasses’. However, a lot of convictions based on testimonies provided by supergrasses were subsequently overturned, and the tactic of using them was scrapped in 1985

4. Aftermath of a bombing on the Unionist Belfast street from The Troubles

This photo shows the aftermath of a bombing on the Unionist Belfast street from The Troubles. The attack was launched by the Irish Republican Army on a Saturday afternoon on October 23rd, 1993. The Shankhill Road bombing took place at a fish and chip shop known as Frizell’s. It killed ten people including two children.

The aim of the attack was to assassinate the leadership of the loyalist Ulster Defence Association (UDA) who were said to be using the room above the fish and chip shop as a meeting point. The majority of the dead were civilians, with only one being a UDA member and another being an IRA attacker disguised as a deliveryman who was killed when the bomb went off prematurely. Over 50 others were brutally wounded. The attack triggered a mass of revenge attacks that saw 14 mostly Catholic civilians slaughtered in the week after the Shankhill Road bombing.

3. Protestant Kids Playing With Toy Guns Near The Peace Wall

This photo was taken not long before the Good Friday Peace Agreement that saw the bulk of the violence in Northern Ireland come to a long sought after end. These children are from the protestant community and playing with pellet guns near the so called ”peace walls” that separated the Unionist Belfast Street from The Troubles from the Republican Falls Road.

The peace walls are not only constructed in urban areas of Belfast but have also been installed in other places plagued by sectarian violence like Derry and Portadown. The official role of peace walls is to limit violence between Catholic and Protestant communities on either side. Often made of bricks or still, they can reach up to 25 feet in height and stretch for miles. Some have gates that allow for traffic to pass during daylight hours but are sealed off at night.

2. Civilians Stand Behind a Balaclava-Clad Paramilitary on The Eleventh Night.

Similar to the footage of civilians on the Falls Road standing behind masked IRA paramilitaries, this photo shows attendees of the Eleventh Night on the Shankill Road as they stand behind a Loyalist Paramilitary wearing a balaclava. The event is held to celebrate the victory of Protestant King William of Orange over Catholic King James II at the Battle of the Boyne in 1690. An event that began the Protestant Ascendancy in Ireland

The Eleventh Night is one of the most well-known and sometimes infamous events in the Northern Ireland calendar. It takes place on the evening before the 12th of July which is an annual celebration for protestants. The event usually features an enormous bonfire that sees Republican icons burned followed by enormous street parties and marching bands. The event is repeatedly condemned due to the sectarian nature as well as the environmental impact of the fires.

This photo shows masked UDA paramilitaries manning a checkpoint on the Shankhill Road in 1972. The men are using an Italian Vetterli M1870/87 rifle that was possibly smuggled into Ireland during The Larne gun-running operation that took place at the turn of the century to equip the UVF during the days of Michael Collins and the Flying Columns.

The Larne operation took place in April of 1914. The aim of this gun smuggling operation was in order to arm the Ulster Volunteer Force (UVF). Over 25,000 various rifles and up to 5 million bullets were sourced from the German Empire just a couple of months before Britain declared war on Germany. The shipments successfully landed in Larne, Donaghadee, and Bangor. Thanks to Balaclava Street for the photo and backstory.

Related Articles to Photos of Unionist Belfast Street From The Troubles

This article has looked five lesser seen but iconic photos taken on this Unionist Belfast Street from The Troubles conflict. These photos range from paramilitary forces active in the area to civilians in day to day life as the world around them degenerated into a warzone. This article is not aimed at glorifying or demonizing either side of The Troubles, but instead to shed light on one of the darkest eras in Belfast’s modern history.