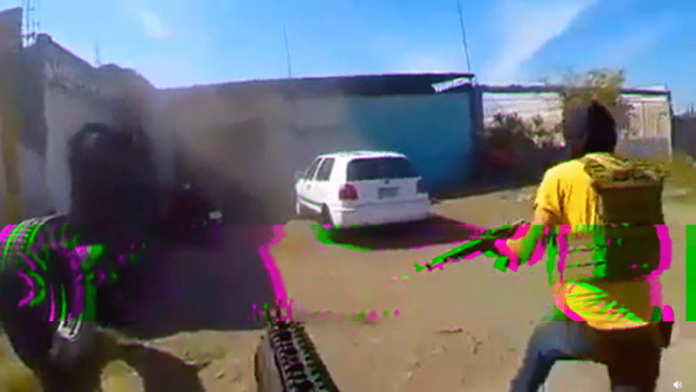 The first combat footage of our new Narcos category took place in Valle de Santiago. It shows members of the Santa Rose de Lima Cartel attacking members of a rival Mexican cartel or former members of their own during a power struggle. After being cut down in the initial hail of bullets, the slain cartel members are ruthlessly sprayed with rounds to ensure their death.

Click video to play if it does not play automatically.

After murdering the first rivals they come across, the attack continues as the Santa Rose de Lima cartel members use one of their pickup trucks to smash through the doors of a nearby garage in a hunt for other enemy cartel members. After finding none, they proceed to make their escape from the area.

The attack was part of the brutally violent warfare that took place this year between the Santa Rose de Lima cartel and the equally infamous Jalisco New Generation Cartel. The cartel war saw the once prominent CRSL lose a large amount of territory and subsequent power.

The Mexican Cartel Behind the Brutal Attack

The Mexican cartel behind the ruthless attack that saw dead bodies sprayed with bullets was the Santa Rosa de Lima Cartel or CRSL. Founded back in 2014, the CRSL was founded by David “El Güero” Figueroa who was then succeeded by José “The Sledgehammer” Ortiz.

Hailing from the town of Santa Rosa de Lima in the Mexican state of Guanajuato, the main income of the CRSL came from various oil theft operations across the area. By 2017, this Mexican Cartel had amassed almost 1,700 fuel milking points. In addition to oil theft, the cartel was active in widespread extortion of local businesses.

After enjoying six years of successful control over their area, 2020 saw the violent demise of the Santa Rosa de Lima Cartel. The downfall came as a result of a 2019 operation launched against the CSRL by Mexican federal forces and a subsequent turf war with the Jalisco New Generation Cartel.

The government operation took place in March 2019. Codenamed ”Timon Strike”, it saw various raids carried out against the CSRL which led to over 42 prominent members arrested. A power vacuum occurred as a result and saw not only a violent turf war erupt with the Jalisco New Generation Cartel, but an internal feud over leadership of the CSRL.

“The illegal siphoning off of fuel from pipelines belonging to state-oil company Pemex is big business in Mexico. The Mexican government made the dismantling of the fuel theft gangs such as the Santa Rosa de Lima cartel a top priority in 2019.”

By late 2020, the combination of government actions and the war with the JNGC had led to Santa Rosa de Lima Cartel losing the vast majority of the territories they controlled in Guanajuato, Querétaro and Hidalgo. In addition, all of their ”soldiers” were reported to have either been arrested, killed, or had defected to another cartel.

The final crushing blow to this Mexican cartel came in August of this year when José “The Sledgehammer” Ortiz was captured by the Mexican authorities. Arrested alongside 5 other cartel members, the arrest also saw the release of a businesswoman who had been kidnapped and was being held by the cartel. Ortiz’s successor, Adán “El Azul” Ochoa, was also captured in October.