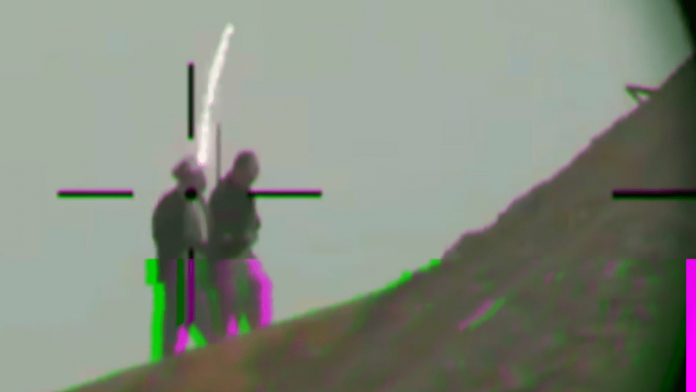 The following combat footage, originally shared by @worldonalert on Twitter, took place in Iraq during the height of the ISIS insurgency in 2017. It shows an Daesh sniper fire a tracer round at two Iraqi soldiers or militiamen. The tracer round ricochets off the jaw of one Iraqi soldier and the second round passes over his head.

Despite being left with a brutal facial injury, it’s highly possible that the soldier survived the attack. Additionally, it should be noted that snipers do not normally use tracer rounds due to terrible accuracy and the tendency to give away their position. Daesh, however, has been known to use them specifically for propaganda video purposes in order to make kill shot far more visible than a standard round.

Tracer rounds are a form of ammunition that leaves a visible trail so their trajectory can be followed. Originally, tracer rounds were designed for fighter planes in order for the pilot to be able to see a visual path of the rounds he had fired. When deployed in combat, it was soon discovered that tracer rounds actually took a different path than non-tracer rounds due to them being a different weight and shape than conventional rounds.

These days, tracer rounds are used across a range of weaponry and often mixed into the ammunition feed of automatic weapons used by ground troops. They often replace every 5th round in order for the shooter to be able to see the path of his fire or for zeroing in a burst when aiming at targets or the enemy.

Related Articles to the Tracer Round Combat Footage

They are basically made of a material that burns as it flies, so as to be visible, during the days and particularly at night. They travel in the same path as the regular rounds so that they aim correctly. Tracer Ammo doesn’t ignite until it is clear of the barrel, so it does not pose a risk of damaging the barrel of the weapon.