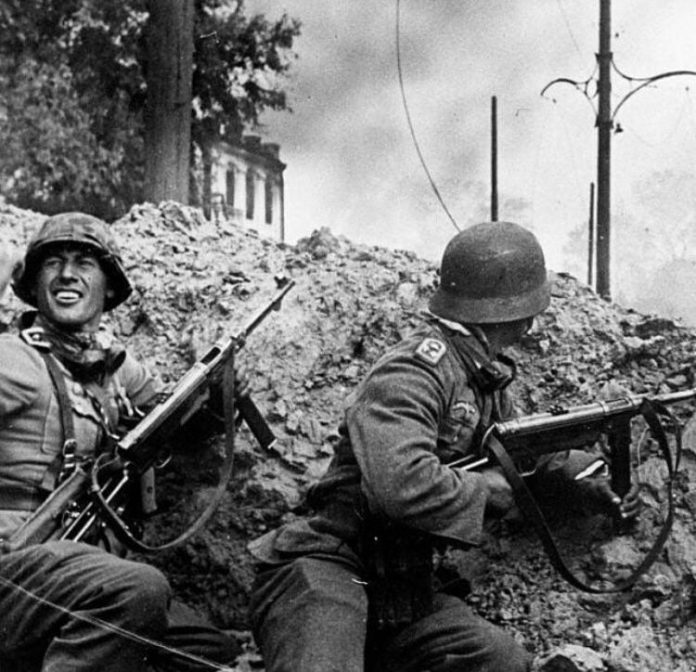 During WW2, there were few submachine guns as iconic as the Soviet PPSh 41 and the German MP40. Both characteristic of the Eastern Front during the Second World War, they were both vastly different in design both visually and economically. In fact, many German soldiers would drop their precision-engineered MP40s in favor of captured Soviet PPSh 41s, due to their ability to operate in brutal sub-zero temperatures.

In the past, we’ve covered many of the incredible firearms videos from the team at Kalashnikov, including their infamous battle test of the PPSh-41 where they put over 900 rounds through the weapon to see if it would still be standing at the end. Today we wanted to bring you their latest awesome release which pits the two submachine guns of the PPSh 41 and the MP40 against each other:

The PPSh 41 was one of the most easily recognizable Russian guns in WW2 and is a magazine-fed submachine gun that uses an open bolt, blowback action. Its mostly constructed from stamped steel and can be used interchangeably with drum or stick magazines loaded with the 7.62×25mm Tokarev round. It was designed by Georgy Shpagin as a cheap, reliable, and simplified alternative to the PPD-40. Amongst Soviet soldiers, the sound of its name resembled the Russian word of “papasha” which means ‘Daddy’. Thus, the weapon was called ‘The Daddy’ in the Soviet Trenches of WW2. It was also called the burp gun due to the noise it made when it was fired.

Around 6 million of the weapons were produced during WW2 and subsequently, the weapon saw extensive use throughout the war on both sides of the Eastern Front. Following 1945, the Soviet PPSh machine gun saw continued combat in the Korean War and the Vietnam War and has even been seen in use with militant groups in the current Syrian Civil War.

Based on the original MP38 designed two years earlier, the German MP40, which stands for Maschinenpistole 40, was one of the most recognizable German submachine guns in WW2 and arguably Nazi Germany’s version of the PPSh 41. It was originally created in 1938 by weapons designer Heinrich Vollmer and was given the inaccurate nickname of the “Schmeisser” by the Allies, after Hugo Schmeisser who designed the MP18, although he was not involved in the design of the MP40 in any way. Like the majority of Nazi German weapons, it was technologically advanced for its time and was utilized by infantry squad leaders in the Wehrmacht and paratroopers in the Luftwaffe on both the Western and Eastern Front.

It’s believed that over 1 million MP-40 were produced during WW2. Made from stamped steel and firing the 9×19mm Parabellum, the MP 40 was an open-bolt, blowback-operated submachine gun. It only fired in automatic but had a fairly low rate of fire which allowed it to fire single shots with controlled trigger pulls. Below the barrel, it featured a resting bar made from steel or bakelite which was designed for stability when firing from open-top APCs such as the Sd.Kfz. 251 half-track.

Despite its reliability, the MP40 suffered a string of flaws in combat. On the Eastern Front, its precision-engineered construction led to it freezing and jamming easily, whereas the Soviet weapons performed far better in the unforgiving Russian winters. The 32 round MP40 magazine was also misused as a handle quite often leading to jamming when pressure on the magazine caused the magazine lips to move out of the line of feed since the magazine well did not keep the magazine firmly locked.

If you enjoyed this article, be sure to check out our related content in our weapons and tech department!