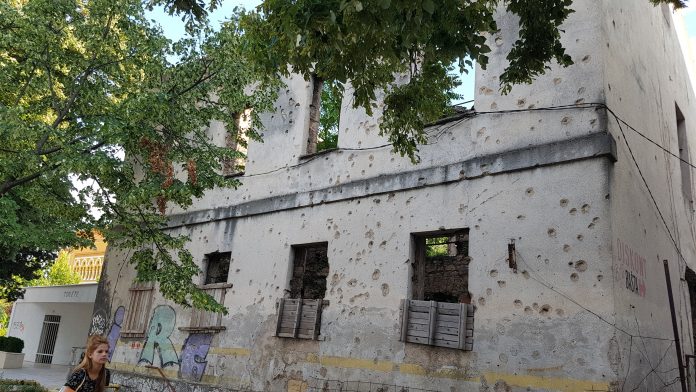 The city of Mostar is located in Bosnia not far from the border of Croatia. It’s a city that had been on my bucket list for years due to its iconic Mostar Bridge and the dark history associated with the city during the Yugoslav wars in the 1990s. Populated by mostly ethnic Croats and Bosniaks, the city erupted into grueling ethnic violence that turned it into a deadly battleground littered with snipers and artillery strikes 24 hours a day.

Last year, we were invited onto an ultimate Yugoslavian Adventure led by the team at Soviet Wastelands which started in Slovenia before traversing the Balkan peninsula taking in Croatia, Bosnia, Serbia, Kosovo, and Albania as well as all of their war-torn and communist-era history on the way. Luckily for me, we had 24 hours in Mostar as a feature of the trip.

During the Yugoslav wars, Mostar came under two phases of siege in 1992 and 1993. The first phase followed Bosnia and Herzegovina declaring independence from Yugoslavia, which subsequently triggered the majority-Ser Yugoslavian People’s Army to attack the city which was defended by an alliance of Croatian and Bosniak soldiers and paramilitaries. The first siege pushed the Yugoslav Army out mostly due to the success of the Croatian led Operational Jackal. In the aftermath, the historic city was obliterated due to the fighting and almost 100,000 people had fled for their lives.

The second siege of Mostar was characteristic of the Yugoslav wars as former friends, neighbors, and comrades violently turned on each other. As the war grew to massive proportions and the fighting became more viscous, the political landscape in Bosnia changed rapidly. The Bosniaks and the Bosnian Croatians of Mostar who had fought side by side initially against the Serbs soon began to turn on each other leading to the Croatian forces launching a siege of the majority-Bosniak Eastern side of Mostar. This siege caused the deaths of even more civilians, starvation, and relentless destruction of historical sites. The violence ended a year later after an international intervention led to the Washington agreement being signed by both sides leading the Croat–Bosniak federation being formed.

Not since WW2 had the world seen such a brutal and deadly conflict as the Bosnian War. Mostar was host to some of the most violent episodes of the conflict and was branded ‘a war inside a war’. The widespread destruction and hatred for each other persevere to this day and the city remains deeply segregated on ethnic and religious lines between Catholic Croats, Muslim Bosniaks, and Orthodox Serbs.

On a bright summer day, we set out to spend our 24 hours in Mostar. The drive from Sarajevo to Mostar is a good few hours and is strange due to the severe climate change from the hot and humid mountains of Sarajevo, to the arid Mediterranean environment that is characteristically Mostar. The trip there was broken up with a few great spots on the way from epic castles and stunning lakes to WW2 battlefields and war-torn towns from the 1990s.

On arrival in Mostar, we parked up near what used to be the city’s main bank. Today, it stands as shrapnel and bullet-scarred hulk on the outskirts of the old town. Optimistic locals have created murals that turn the bullet holes and grade blasts into symbols of positivity, but regardless, the haunting atmosphere of the gruesome fighting that took place here still remains.

Meandering down the tight lanes to Mostar’s old town, there is seemingly not a wall insight that hasn’t suffered the damage of war. Street sellers take advantage of the recovering tourism to the city by selling a range of souvenirs from fridge magnets and jewelry to bayonets and tank hatches, the latter being my kind of souvenir.

Before long, the incredible bridge of Mostar appears in front of you. The bridge was commissioned by Suleiman the Magnificent in the mid 16th century and connected the two halves of the city over the river Neretva. During the Yugoslav wars when Mostar collapsed into trench warfare between the two sides of the river which were occupied by Croat and Bosniak forces respectively, the original bridge was obliterated and its 427-year reign came to an end in the winter of 1993 when it was blown apart by Croatian paramilitaries and fell into the ravine below.

When the conflict was over, a painstaking project began to reconstruct the iconic bridge by hand and in 2004, the new bridge that stands today was unveiled. It was a reconstruction of the old 16th-century bridge and demonstrates an incredible piece of Balkan Islamic architecture. In contrast to the horrific scenes of the 1990s, today the bridge is most known for playing host to traditional diving which is truly a sight to behold.

Whilst admiring the bridge in the summer months, you’ll likely be approached by kids collecting money for the divers who are perched perilously on the top of the bridge. Once enough money has been collected, they begin a hair raising dive into the water below. Many adventurous tourists aspire to tick this off their bucket list, but the diving requires a large degree of skill and intense training due to the very low temperature of the water having the ability to give you a heart attack or throw you into shock if you don’t dive correctly. The old bridge in Mostar has been a feature in the Red Bull Cliff Diving World Series annually since 2015.

“What happened in Bosnia could happen anywhere, particularly in places that are diverse and have a history of conflict. It only takes bad leadership for a country to go up in flames, for people of different ethnicity, color, or religion to kill each other as if they had nothing in common whatsoever. It happened to us. It can happen to you.”

― SAVO HELETA, NOT MY TURN TO DIE: MEMOIRS OF A BROKEN CHILDHOOD IN BOSNIA

In the daytime, Mostar is packed with tourists making it a little stressful due to the packed streets. However, most of the tourists are day-trippers and in the evening they return to Sarajevo or go back over the border to Croatia, meaning you have most of the city to yourself. This allowed us to bag a great spot at a waterside restaurant and round off the day with an epic Bosnian feast. I found that 24 hours in Mostar is more than enough to see all of its main sights and experience the city after the tourists have gone.

If you enjoyed this article, be sure to check out our other travel department where we post articles from our ventures to corners of the world affected by war and featuring a lot of dark history. If you’re looking for war-related tours around Sarajevo and the wider area, be sure to check out Funky Tours in Sarajevo.

A Soviet & NATO Crossover in the Black Sea Port of Varna

Protected: Driving on the Road of Death in Donetsk