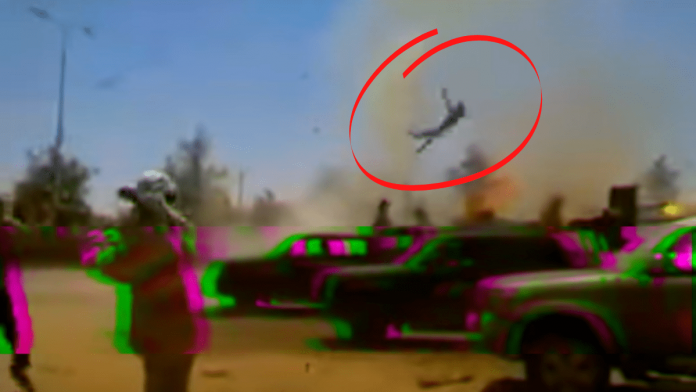 The following combat footage was captured during the first Libyan Civil War. As Libyan rebels use a Soviet-made tank to fire on Gaddafi loyalists, a breech malfunction occurs inside the tank. The resultant internal explosion violently launches the body of one of the tank crew into the air like a rag doll.

The explosion inside the tank was likely the breech of the tank’s main gun not being closed properly upon firing. This would have resulted in the backblast of the shell killing everyone inside and throwing the person nearest to the hatch into the air. It’s also possible that inadequate breech heat dispersal, coupled with high sustained rates of fire, caused an ammunition cook-off.

The footage of the Libyan rebel being thrown out of the tank like a rag doll took place during the First Libyan Civil War. The conflict was fought between the forces of Colonel Muammar Gaddafi and anti-Gadaffi rebel groups supported by various foreign governments.

The war erupted in 2011 following violent anti-regime protests across Libya that saw pro-Gadaffi troops open fire on protesters. Following the initial bloodshed, the situation deteriorated into a full-scale rebellion across Libya. Anti-regime rebels set up an interim governing body known as the National Transitional Council.

In the weeks following, Libya erupted into full-blown open warfare between Gadaffi loyalist troops and the rebels. The United Nations Security Council openly took the side of the rebels and imposed sanctions on Gadaffi and the figureheads of his regime. Nevertheless, in March of 2011 Gaddafi’s forces soon consolidated and made significant gains against the rebels and soon re-captured several coastal cities from the rebels, including the strategic city of Benghazi.

The UN subsequently established and enforced a no-fly zone over Libya in order to prevent airstrikes on civilian areas and to allow the rebels a tactical advantage. However, this UN resolution soon turned into a NATO bombing campaign against Gaddafi’s military installations and civilian infrastructure across Libya.

The bombing campaign and no-fly zone significantly hindered Gaddafi’s progress and led to a ceasefire being declared by the Gadaffi regime. This was the first of many attempted ceasefires throughout the conflict that were offered both by the Gadaffi and the African Union in an attempt to stop the bloodshed and rapidly worsening conflict. All either failed or were rejected by the rebels due to all of the deal lacking any prospect of Gadaffi’s removal from power.

By the summer of 2011, the gains made by Gadaffi’s forces in the winter were shattered. Rebel forces, backed up by NATO’s extensive aerial bombing campaign, managed to capture lost territory and eventually reached the capital city of Libya: Tripoli. Whilst Gadaffi managed to flee the capital from the advancing rebels, his government was ousted from power and the UN recognized the National Transitional Council as the official government of Libya on the 16th of September.

“We will fight in every valley, in every street, every oasis, and in every town. We won’t surrender again. We aren’t women. We will keep fighting!”

– A speech given by Colonel Gaddafi at the height of the First Libyan Civil War.

Just over a month later, Colonel Gadaffi was captured in his hometown of Sirte and violently killed on camera. Three days later, the country was declared to be liberated by the National Transitional Council and the war was announced to be officially over. However, this was far from what the future had in store.

There was no chance for the dust to settle even after the declaration of war’s end. Gadaffi loyalists continued to wage a low-level insurgency in the early days, but as the months went on, various disagreements and strife between local militias and tribes plunged the country into almost perpetual warfare. Eventually, this led to the outbreak of the Second Libyan Civil War which is still active to this day.

The Second Libyan Civil War is mainly being fought between the Government of National Accord, led by Prime Minister Fayez al-Sarraj, based in the capital Tripoli and established after failed military coups and the relocation of the House of Representatives to Tobruk, and the House of Representatives, elected in 2014 with a low turnout (18%) which appointed Marshal Khalifa Haftar as commander-in-chief of the Libyan National Army with the mission of restoring its sovereignty over the whole of Libyan territory.